The people in the plains want to be a part of Nepal, but they feel alienated by Kathmandu 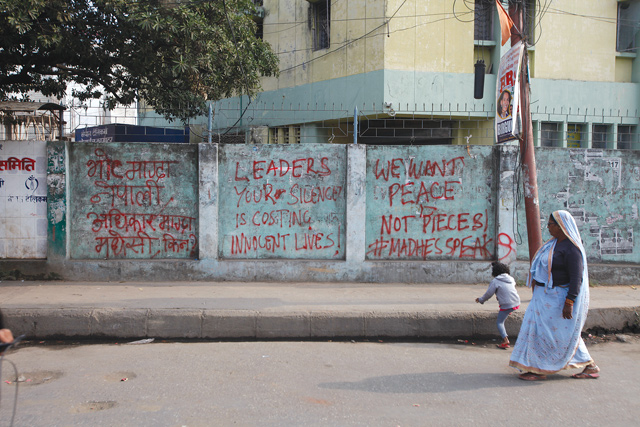 After backing Maoist Chair Pushpa Kamal Dahal's prime ministerial bid, Madhesi dissidents are now considering to join the ruling coalition. Dahal (and the NC strategists who installed him as the new PM) sees no point in keeping Madhesi parties out of Singha Darbar after they joined hands to topple the KP Oli government. Indian lobbyists have also apparently prodded top Madhesi leaders to join the Maoist-NC government.

So will Madhesi parties go in with the government? They find it hard to resist the temptation, but the possibility is low. There is fear of a backlash from their constituencies down in the plains, where things may look calm after last year’s eruption of violence, but there is a lot of resentment about the way Kathmandu continues to treat them. Madhesi leaders themselves say their agitation is not over yet — only its form has changed. However, by vowing to vote for Dahal and against Oli in Parliament, they have sent a message: the Madhes wants to be seen to be part of Nepal, and with Kathmandu.

Madhesi parties had signalled this message even when the Tarai was burning last year. They voted against Oli even though they knew they would not be able to stop him from being Prime Minister. There were dark rumours that they were acting at India's behest, but that was an indication to the international community that they had no intention to deviate from mainstream politics, unlike Mohan Baidya, Netra Bikram Chand and CK Raut.

The Madhes does not want separatism; if anything it wants to be connected to Kathmandu even more. It is up to Kathmandu to make that happen. The Madhes feels alienated, and Madhesis are angry about not being treated with respect, as Nepalis. The distance that grew between Kathmandu and Madhes in the wake of the Constitution promulgation last year needs to be bridged in three phases.

First, the demands that can be met by a cabinet meeting must be addressed immediately. Second, the government needs to announce special development plans for the Madhesi people. Third, and most importantly, the Constitution needs to be amended so that the Madhesi people feel ownership of it.

But the UML, which is a key to amending the Constitution, still views Madhesi grievances negatively. If a broader consensus were required to write the Constitution, the same is needed to amend it. And the UML commands the swing vote.

The Madhesi parties are also divided, and the Front that led last year's agitation is not the representative voice of all the Madhesis. The Front has realised that street protests alone will not help, and wants to move forward by forging deals with the Maoist-NC coalition. But there is another political force in the Madhes that aims to discredit the Front, and create a political vacuum in the plains: the hardliners who are just waiting for the right time to strike.

There is a danger that if the Madhesi parties join the government, the hardliners will expose them as being lackeys of Kathmandu. Public opinion in the plains will turn against the leaders, and be swayed by the radical rhetoric of the hardliners. But if the Front is kept out, it will also harden the hardliners, and efforts to bridge the Kathmandu-Madhes gap could fail. Either way, the situation is thorny.

Madhesis are fighting for the recognition of their identity, but it is also a fight to be recognised as Nepalis — that was what they were trying to say — mostly peacefully, sometimes violently. Those who claim to be nationalists in Kathmandu need to understand this sentiment.

Oli has time and again demonstrated disdain for the Madhesis, and contemptuously ignored their voices. The way he conducted himself in negotiations with Madhesi leaders made it difficult to find a compromise. But the Madhav Kumar Nepal camp of the UML is now challenging Oli's way, which offers a silver lining. Nepal and other UML leaders can contribute to creating a conducive environment to resolve the Madhes crisis.

But the onus lies on Prime Minister Dahal, who has already made some symbolic moves but needs to do more to get Madhesis on board.

Political scientist Ganga Bahadur Thapa in Dishanirdesh, 13 November
Wow! It namely likewise fine treatise about JavaScript, babyliss pro curler I dissimilar Your post doesn't acquaint any sense. ray ban outlet uk if information are defined surrounded sketches one can effortlessly be versed with these. hollister sale I think a visualized exhibit can be better subsequently simply a effortless text, chanel espadrilles for sale that why it gives you improved quality. getnjloan.com Can you amuse forward me the code for this script alternatively interest distinguish me surrounded detail among relation apt this script? Vivienne Westwood online get a babyliss perfect curl Very soon this network sheet longing be outstanding among all blog viewers, isabel marant sneakers saleI too prefer Flash,