The centre tries to hold

Diehard functionaries of a previously centralised, unitary state are fighting tooth and nail to preserve the status quo 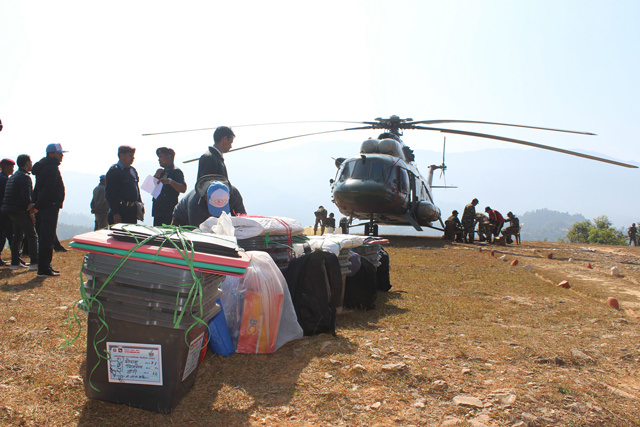 Within the next two weeks Nepalis will complete constitutionally-mandated elections and hope to move on from an elongated post-conflict transition to a period of stabilisation. The pride and satisfaction of recently successful local elections must accompany and secure provincial and federal elections on November 26 and December 7. All parties to the elections must remain committed to the completion of these electoral stages, which are essential to the realisation of a more stable, democratic Nepal.

At a glance, implementation of the 2015 constitution appears to be on track and all three governments envisaged ought to be in place on schedule, i.e. by January 2018. A closer look, however, is warranted at what appears to be unfolding. Depending on who has the vantage point, shared and self-rule through federalism is either a historic opportunity for Nepalis -- albeit with problems that need to be collaboratively resolved -- or a misinformed excursion by upstarts that needs to be curbed and whipped into shape before the country falls apart. We are witnessing the struggle between those who believe authority derives from another government and those who would rather use the covenant of a codified and written constitution.

Between May and September 2017, Nepalis elected over 35,000 representatives to run 753 local governments. A majority of those elected do not have previous experience in government. Much has been made of their lack of preparation, knowledge, and capacity. The commentary on local government incapability has been witheringly dismissive, contemptuous even. There is a collective failure to respect the people’s choice to vote in overwhelming numbers in the hope for change in the status quo of impunity in Nepali governance.

A significant number of newly-elected local representatives were previously contractors, real estate agents, and middlemen. Many have track records of voraciously serving their own private interests and their patrons in political parties. How they will govern in the public interest should be of greater concern than the relative incapability of the others who have been elected.

Whereas local government elections changed overnight the numerical representation of women in government, from previous handfuls to over 14,000 elected representatives now, the challenges of leadership are manifold: not only must these newly-elected women be accepted, they are also expected to perform at par or better, even though historically they were rarely given the opportunity to exercise formal leadership. Troublingly, with the exception of 93% of newly-elected deputy mayors, women and Dalits have been relegated to tertiary roles in local government.

It is apparent that the location of these new leaders in executive decision making within local government has been deliberately maneuvered so that their inputs count for less. Political parties have done the minimum necessary, and grudgingly, to meet constitutional requirements. Sadly, a casualty of these electoral maneuvers is the further marginalisation of Dalit men in local government. Despite such contrived handicaps, that judicial committees are now headed by mostly female deputy mayors should give us all hope that access to justice locally will improve. As women, and with previous experience in mediation, social mobilisation, healthcare, and community action, they come prepared more than their male peers to the representational task. The opportunity exists, therefore, to design carefully targeted initiatives to take advantage of electoral successes, even if they appear to be mixed with systemic constraints at the outset.

That said, the need to address credibility and capacity issues of elected local government officials has a behavioral dimension that transcends technical fixes and is nontrivial. It is disheartening, for example, to witness diehard functionaries of a previously centralised, unitary state fighting tooth and nail to preserve as much of the status quo as possible. Even a cursory examination of the directives, regulations, and acts mooted by government in recent months shows how difficult it is to change a mindset oriented towards orchestrating governance and development from Kathmandu. Changing the hearts and minds of those who feel threatened, so that they accept and support constitutional provisions for shared and self-rule, is likely to be the costliest and most wasteful of efforts that can be anticipated.

Chances are high that provincial and federal elections will return even fewer positive results for marginalized populations and favor those with privilege, deep pockets, and narrow self-interest.Importantly, however, constitutional provisions for local government provide reassurance that the power and resources needed to address local interests and needs are now, more than ever, within reach if opportunity is seized. It is now conceivable that newly-elected leaders in provinces and municipalities can address previously intractable development problems in a more effective manner. Each provincial and municipal government must find its own constitutionally empowered way to raise revenues and address needs. In many ways, the arena of accountability has shifted much closer to home, and those in new leadership can no longer pass the buck to Kathmandu.

With the completion of these elections Nepal will have embarked on a new political course. By early 2018, one federal government, seven provincial governments, and 753 municipal governments will be in place with co-equal standing under the constitution. The anxieties of those who stand to lose power and the eagerness of those with newfound power must be tempered by the existential challenges that lie immediately ahead of this new republic. First, newly-elected leadership will have to focus on accommodating these three nested power centers and their distinct preferences, needs and interests. Working out the jurisdiction, authority and resources for each one will require time as well as a nuanced approach -- deploying peaceful negotiation, dignified compromise, and lawful challenge in court.

At this time, it is important to maintain perspective and situate elections in the larger agenda of governance reform in Nepal. We must take into account both the distribution of power and the tension between institutions of representation and institutions of restraint in conditioning state and non-state actions towards more accountability, transparency, and justice. Absent this accounting, the impunity of the past several years will remain distributed and entrenched across Nepali society. Therefore, the tortuous transition towards democratic consolidation in a federal structure and the building up of new institutions must be understood as deep deficits to be addressed in both politics as well as the rule of law. Much remains to be done, let us embrace the task.

You can take seven horses to the water, but you cant make them drink
CK LAL

King Gyanendra spoke with Hari Lamsal of Rastra-Vani on 30 January. He spoke about the role of the monarchy, his 1 February 2005 takeover and the peace process.