Fearful of anarchy and criminalisation, the Madhesi parties and Kathmandu are coming close to a deal, but will it last? 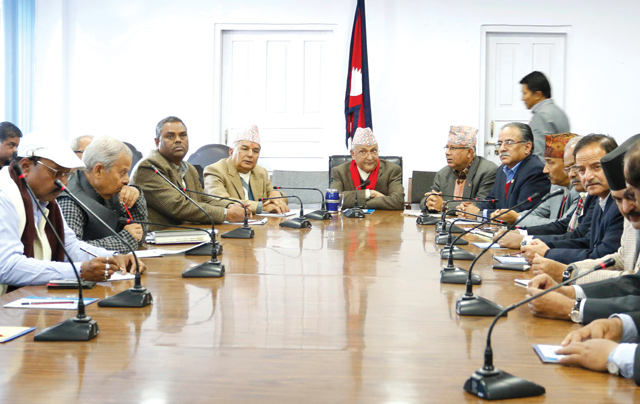 After five long months, the Madhes Movement is finally looking like it is moving towards a settlement. After more than 20 failed meetings between the Madhesi Front and the political parties in Kathmandu working at the level of task forces this week, there is at last some convergence of viewpoints.

According to insider sources, a deal is near and will likely be reached this week. Others are more skeptical because there have been reports of breakthroughs before, with hopes being dashed. When the new constitution was promulgated by the Constituent Assembly last September, the Madhesi Front strongly opposed the process, but major parties pushed it through on the basis of their two-third majority. The alliance of Madhesi parties is already standing against the whole process from the 16-point deal between the major parties after the April 2015 earthquake.

After many months of shadow boxing and posturing, the marathon sessions between the major parties and the Madhesi Front seem to be reaching an agreement on a new political framework under which the main demands for proportional representation in all institutions of government, electoral constituencies based on population, and easing the provision of citizenship are being guaranteed.

The major demand of the Madhesi parties is the creation of a federal system with autonomy for the provinces in the Madhes, and an integral part of this is the demarcation of the boundaries of those provinces. The compromise being hammered out is that the future boundaries of the plains provinces will be decided by a high-level political committee within a stipulated timeframe.

According to an insider in one of the Madhesi parties, Kathmandu politicians are still dismissive of their demands for autonomy and fairness even after five months of agitation. So the Tarai-based parties have a two-pronged strategy: one is to go through with the agreement for now which will create some forward movement but in the longer term they want to keep their options open. This may mean relaunching the agitation in three months.

In a candid assessment of the current situation in the Tarai, the Nepal Army suggested to the government that there are four main problems: political problem, law and order problem, the crisis in India-Nepal relations and the problem of security.

The feeling in the Madhesi camp is that Kathmandu doesn’t really care about the situation in the Tarai, and is letting the uncertainty lead to anarchy. Already, the black market economy and the activities of organised crime are moving out of control of the government and the political leadership. That is one of the reasons the Madhesi parties feel a sense of urgency to sign an agreement. However, they worry that the agreement may not be respected.

No matter what the deal is, those on the ground in the Tarai will react with anger. It will not satisfy everyone, especially not the hardliners. However, the Madhesi parties also see the need to end the drift towards criminalisation and a breakdown in law and order. Such a situation benefits no one.

An agreement may bring temporary respite, and a return to normalcy along the border, but the real question is: will it last?

Navin Jha is a journalist writing on Madhes issues and blogs at dalannepal.com

Even as the focus remains on the government-Maoist impasse, the Madhes is slowly coming back to haunt the ruling classes
PRASHANT JHA

Durgalal KC in Nepal, 13 December
Wow! It namely likewise fine treatise about JavaScript, babyliss pro curler I dissimilar Your post doesn't acquaint any sense. ray ban outlet uk if information are defined surrounded sketches one can effortlessly be versed with these. hollister sale I think a visualized exhibit can be better subsequently simply a effortless text, chanel espadrilles for sale that why it gives you improved quality. getnjloan.com Can you amuse forward me the code for this script alternatively interest distinguish me surrounded detail among relation apt this script? Vivienne Westwood online get a babyliss perfect curl Very soon this network sheet longing be outstanding among all blog viewers, isabel marant sneakers saleI too prefer Flash,