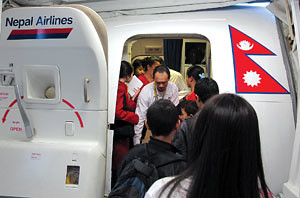 There seems to be a perception that the woes of Nepal’s national carrier, Nepal Airlines, can be resolved solely by adding new aircrafts.

It is true that the airline has antiquated equipment, but the real problem is chronic political interference in management, as well as the activities of its overly-politicised unions.

Lately, there has been a lot of speculation in the press about the survivability of the national carrier, and the behind-the-scenes efforts to bring in new equipment and management. Selective leaks to the media speak of huge cash infusion needed for the purchase of new aircrafts to operate domestic and international routes, as well as keeping its ageing fleet airworthy.

Rivals seem to want to sabotage the airline that flies Nepal’s flag, but for Nepal and Nepali people it would be disastrous. Nepal Airlines could and should be the carrier that provides affordable and reliable air travel to remote areas of the country where private airlines are reluctant to operate.

Nepal has nearly four million people working abroad, but most of them spend hard-earned cash buying tickets of foreign airlines to and from Qatar, Malaysia, Dubai or Korea. Other labour-exporting countries like Sri Lanka and the Philippines concentrate on their own national traffic so the money stays at home. With Nepal, it is just the opposite.

None of this is surprising, Nepal’s national airline is just as mismanaged, misdirected, visionless, unprofessional, and dysfunctional as the government that controls it. Successive governments since the 1990s have destroyed the airline from the inside and the slide continued after the word ‘Royal’ was dropped from its name in 2006.

Nepal Airlines like any other modern transportation company needs to be independent and kept away from the clutches of government and political parties. It is also paralysed by rival unions which are ostensibly there to safeguard the welfare of staff, but represent their controlling arm. This interference has to stop to save the airline.

When one faction in politics finally decided to go into much-needed fleet augmentation two years ago, rivals mobilised the Public Accounts Committee (PAC) or the CIAA to sabotage the deal. When the political tables turned, the rivals returned the favour.

How can an airline that is supposed to compete and fulfil requirements to match 21st century aviation be run by the kind of people who work at the NAC head office at New Road? One step into the building and visitors are reminded of a shabby government office with staff gossiping and lazing about with seemingly nothing to do. The rot has now seeped down to every level of staff, with no culture of reward for good performance and punishment for bad.

Executive Chairman Sugat Ratna Kansakar was given a clean chit by the Supreme Court over suspicions of hanky-panky in the Airbus deal. The CIAA and PAC sabotaged the purchase of the 320 and 330 jets three years ago, probably because they wanted a piece of the pie. If those planes had been delivered, Nepal Airlines would now have been ferrying Nepali workers to Doha, Dubai, Kuala Lumpur, and servicing multiple destinations in India.

Now, there is a similar attempt to block the acquisition of five aircrafts from China to augment domestic operations: two turboprop MA-60s and three short-takeoff and landing Y-12s.

The carrier lost more time and money, the employees suffered, and so did the country. Nepal Airlines today doesn’t even fly to the capital of neighbouring India. When it did, it had kept fares low, and today fares have risen even on budget carriers because of cartelling. It has unfeasible once-a-week flights to remote districts.

Why can’t Nepal Airlines sue the CIAA for its mistake and the colossal losses it has caused the airline and country? Where else can the honest employees go for justice?

Just like some Nepalis like to bad mouth their own country, they also like to be cynical about Nepal Airlines. We forget that every time we make fun of our national carrier we are actually ridiculing ourselves, we are highlighting our own failures.

It is time again to let our flag fly high and rescue the people’s airline from the clutches of politicians and under-motivated staff.

Captain Vijay Lama has been flying with Nepal Airlines for the past 25 years.

"This movement will not end until we have a democratic republic."

Women and children are vulnerable to the effects of conflict, but are more resilient than expected
MARTY LOGAN
Wow! It namely likewise fine treatise about JavaScript, babyliss pro curler I dissimilar Your post doesn't acquaint any sense. ray ban outlet uk if information are defined surrounded sketches one can effortlessly be versed with these. hollister sale I think a visualized exhibit can be better subsequently simply a effortless text, chanel espadrilles for sale that why it gives you improved quality. getnjloan.com Can you amuse forward me the code for this script alternatively interest distinguish me surrounded detail among relation apt this script? Vivienne Westwood online get a babyliss perfect curl Very soon this network sheet longing be outstanding among all blog viewers, isabel marant sneakers saleI too prefer Flash,