Nepal must exercise the logic of being a true buffer state 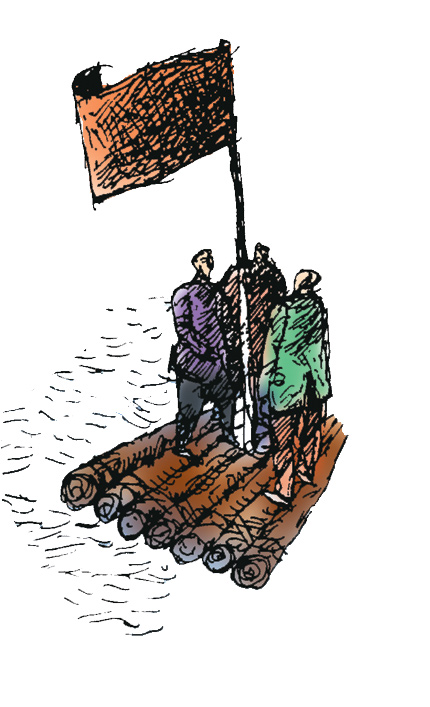 The Nepali language media last week was rife with reports that Indian officials told Foreign Minister Kamal Thapa during his recent visit to New Delhi that the bottom line for ending the blockade was that the word ‘secular’ should be removed from the preamble of the newly-adopted constitution and the whole of the Tarai should be one province.

While the advantage of Nepal being declared Hindu Rastra once again for the BJP’s domestic audience is understandable, what is puzzling is the purported insistence on the whole of the Tarai delineated as a single province. Incidentally, the same demand was raised by the Loktantrik Madheshi Morcha back in 2007 during the first Madhes Movement. The similarity between that demand then and the Indian conditionality now, if true, is intriguing.

That proposal makes absolutely no sense from whichever angle you look at it. The Tarai is a narrow strip of land some 30km wide running 800km east-west, how can it ever be self-governing? What do the people of Jhapa have in common with those in Kanchanpur? They are much closer to their cousins in Ilam and Panchthar. Secondly, the Tarai is ethnically diverse with people of Madhes and Pahad background more or less equally represented at close to 40 percent each.

There are other even more compelling reasons why a separate Tarai province would be potentially disastrous for its inhabitants. The massive extraction of groundwater across the border in the Indian plains has meant that the water table in the Tarai is receding fast. While only a few decades ago, a tubewell 6m deep would have water, it now needs to be at least 50m deep. The worse is yet to come. The only possible sources of water for the Tarai for drinking, irrigation and industrial development will be the rivers and streams flowing down from the northern mountains.

Integrating the Tarai with the mountains makes common sense also from the development perspective. The West Seti project will submerge 2000 ha of land and displace 16,000 people in the four hill districts of Doti, Dadeldhura, Bajhang and Baitadi, but would irrigate 360,000 ha of farmlands in the three Tharu heartland districts of Bardia, Kailali and Kanchanpur, generate 750 MW of electricity to be used mostly in the factories of the Tarai yielding an annual revenue of Rs 15 billion that could be used for the overall development of the country including the districts upstream.

So, why would even the Madhesis want the whole of the Tarai to be a provincial strip in the plains only? Why would New Delhi also push that? A plausible answer was provided recently by Indian columnist Ananda Swarup Verma who wrote that India could be ‘trying to turn Nepal into another Jaffna’. The Tamil separatist conflict in northern Sri Lanka sucked India into a bloody and unwinnable war that New Delhi barely extricated itself from.

True, India hasn’t been as blatant in the Nepal Tarai as it had in northern Sri Lanka, but we must learn from India’s mistakes to protect Nepal’s national integrity. While, with all the behind-the-scene activities going on and the growing criticism within India of the Modi government for blockading Nepal the siege could come to an early end. Or, it may not.

Either way, the Nepal government would do well to use this opportunity to bolster political and trade ties with China. Not to thumb our noses at India, but to restore balance in our bilateral ties with the northern and southern neighbours. This would raise hackles in India, but New Delhi will realise that it was its folly that pushed Nepal to the north.

Nepal’s logic as a buffer between India and China presupposes that it benefits from its interaction with both the countries socially and economically even as we stay away from becoming either country’s satellite. This must constitute the crux of Nepal’s foreign policy from here on: a redefinition of the older doctrine of a ‘yam between two boulders’.

The enemy within, Kunda Dixit

Mega goes for megawatts and more

New bank targets everything from ploughshares to hydropower
Wow! It namely likewise fine treatise about JavaScript, babyliss pro curler I dissimilar Your post doesn't acquaint any sense. ray ban outlet uk if information are defined surrounded sketches one can effortlessly be versed with these. hollister sale I think a visualized exhibit can be better subsequently simply a effortless text, chanel espadrilles for sale that why it gives you improved quality. getnjloan.com Can you amuse forward me the code for this script alternatively interest distinguish me surrounded detail among relation apt this script? Vivienne Westwood online get a babyliss perfect curl Very soon this network sheet longing be outstanding among all blog viewers, isabel marant sneakers saleI too prefer Flash,