Discriminatory citizenship clauses should be a national issue, not just a gender one 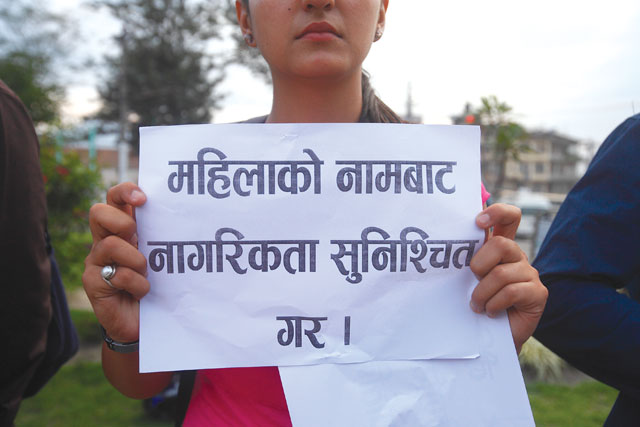 A demonstration against the constitution drafting committee’s decision to keep a controversial clause in the Citizenship Act that requires both mother and father of a child to be Nepali citizens to have citizenship by descent was attended by hardly 200 participants.

Netizens hit back at the change in the provision with the hashtag #citizenshipthroughmothers on Twitter and rights activists lambasted the government calling it ‘regressive’. But on the street, rallies demanding an amendment to the new provision were lackluster, had low turnout and unimaginative protest techniques.

Do we really believe we can convert leaders’ apathy into concern, get them to listen and act by forming a human chain? Or by collecting thousands of signatures? The group we have the (dis)pleasure of calling our leaders are seasoned misogynist megalomaniacs who will just ignore them.

As with most social media campaigns, all the likes and support displayed online for the citizenship through mothers campaign has unfortunately not translated into on-the-ground involvement.

“It’s sad because this is not just a women’s issue. It affects each and everyone of us,” said a friend who has been attending these rallies for the past two years.

One problem is that it has been framed as a women’s issue. Presenting the provisional change as being unfair to women when Article 12(a) of Part 2 of the new draft reads: ‘Both father and mother must be Nepali citizens in order for a child to receive citizenship through descent,’ doesn’t fully justify the claim.

One may naively argue that the new law will create as much hassles for single Nepali fathers to get a citizenship for his child as would single Nepali mothers. But this is Nepal where things don’t always follow a legal course, where a constitution that has been stuck in writing for eight years gets easily endorsed in a night, and where unwed mothers are treated as social pariahs.

This is why despite the Interim Constitution of 2006 providing for citizenship under the mother’s name, it remained largely unimplemented, leaving thousands of children of single mothers stateless.

Deepti Gurung’s daughters are two of them. The tourism entrepreneur has been fighting a long, hard battle against a political, bureaucratic and legal system that is weighted against women. Her case was personally heard by ex-PM Baburam Bhattarai in 2013 who directed officials to look into the matter. They looked the other way.

“Men sitting behind desks have reminded me that my husband’s identity is a must if my children are to be citizens of my country,” wrote Gurung in a column for this paper.

The consequence: Gurung’s 18-year-old daughter Neha had to opt to study Law because admission to a MBBS program required proof of citizenship. Her younger daughter was almost denied permission to sit for her board exams but Gurung took the case to the courts which ruled in her favour.

Makes one question when a written law cannot guarantee a woman to pass on citizenship to her children, how much more damaging will the new provision be. And how many more Nehas will have to sacrifice their choice of study because of this flawed law?

All this seems to be the result of a xenophobic fear that Indian men will all stream across the border to marry our women and become Nepalis. It is this misguided pseudo-nationalism that leaves thousands of Nepali children stateless. And mind you, dear leaders they are both male and female.

7 June | 11PM NST
Wow! It namely likewise fine treatise about JavaScript, babyliss pro curler I dissimilar Your post doesn't acquaint any sense. ray ban outlet uk if information are defined surrounded sketches one can effortlessly be versed with these. hollister sale I think a visualized exhibit can be better subsequently simply a effortless text, chanel espadrilles for sale that why it gives you improved quality. getnjloan.com Can you amuse forward me the code for this script alternatively interest distinguish me surrounded detail among relation apt this script? Vivienne Westwood online get a babyliss perfect curl Very soon this network sheet longing be outstanding among all blog viewers, isabel marant sneakers saleI too prefer Flash,