If Oli fails, a Dasain respite will just be an interval before a more violent climax in the Tarai 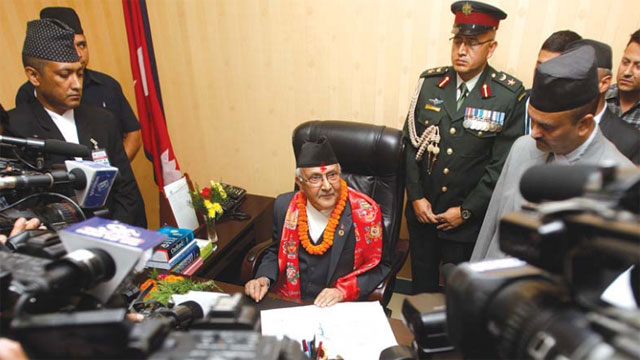 On a hazy afternoon last winter, Madhesi and Janajati leaders were impatiently waiting for UCPN (M) Chair Pushpa Kamal Dahal in Singha Darbar. They wanted to know what transpired in a one-on-one meeting between Dahal and UML Chair KP Oli, who was more influential than NC President Sushil Koirala in the constitution drafting process.

Dahal is poor at hiding emotions. When he is happy, his eyes sparkle. When he is sad, he is known to publicly burst into tears. So when he looked downcast as he stepped in, everyone figured out that the meeting had not gone well. Given Oli’s publicly pronounced rigidity, it was not unanticipated.

But they were in for shock when Dahal briefed them about what Oli told him: “You will reach nowhere walking hand-in-hand with Madhesi and Janajati losers.” Madhesi and Janajati leaders felt hurt. They knew Dahal was very manipulative, but they didn’t think Oli would go that far even though he had been pouring public scorn on Madhesis and Janajatis.

A few days later, Oli said: “Why don’t you claim Bihar as a Madhes province if you think every piece of flat land is Madhes?” He was angry at Madhesi leaders pressing for Nepal’s entire plains region as a Madhes state. Madhesi leaders felt insulted and walked out, demanding an apology that never came.

Negotiations failed and the Constituent Assembly (CA) missed its 22 January deadline without a constitution. Oli convinced Koirala to push through a vote on the new constitution, provoking Maoist, Madhesi and Janajati lawmakers to go berserk in the CA. Later, Oli derided Maoist-Madhesi-Janajati vandals by comparing them with ‘naked oxen’. He went on to ridicule Janajati leader Padma Ratna Tuladhar and his allies as ‘nameless, faceless and useless’ parties.

Despite his revolutionary past, Oli is a status quoist. He did not have faith in the 2006 Democracy Movement, which toppled the monarchy and gave birth to republicanism. Even as hundreds of thousands of Nepalis demanded democracy on the streets during what was known as the April Uprising, he mocked them saying “an ox cart cannot take us to America”.

But that controversial remark has been long forgotten after Oli became the first post-transition Prime Minister of a republic that Nepal has now become. But what should be more serious worry for him is that he is also seen as an anti-Madhesi/Janajati. Before being elected as Prime Minister early this week, he said: “I know some people call me anti-Madhesi, but I am not against any community and I will prove it through my actions.”

If Oli really meant what he said, he has to start re-cultivating his image by reaching out to Madhesis and Janajatis straight away. It was easy for him to hurl slurs from Balkot, but he is now in Baluwatar.

Ironically, by voting against Oli, Madhesi parties have accepted the ‘discriminatory’ constitution which they burnt. They have not formally withdrawn their agitation but are now in the horns of a dilemma. The Madhesi people have lost whatever little faith they had in their leaders, especially Mahant Thakur, who they consider took India’s bait.

Oli’s election as Prime Minster was a face saver for New Delhi to ease the blockade. It was also an opportunity for Madhesi leaders to withdraw their months-long agitation. But Madhesi grievances have not gone away, and Oli needs to address them if he is to keep the Madhesis and New Delhi happy.

Merely exposing the greed and hypocrisy of Madhesi leaders by promising them plump ministerial posts might defuse the Madhes movement for now, but it will be just a matter of time before the Tarai streets flare up again. The Madhes has witnessed three uprisings in less than a decade, and it is time to douse the embers once and for all.

Madhesi leaders are now facing backlash and threats from their own constituencies. There is still discontent, and the Birganj border through which nearly 70 per cent of fuel is imported into Nepal remains blocked. So it is not over yet. There might be some respite during the Dasain festival, but that will just be a lull before the storm. The new constitution does not need to be redrafted.

Madhesis just want the insertion of the word ‘proportional’ in the chapter of fundamental rights, election constituencies in proportion to their population and modification of plains provinces, among others. Oli must show the same urgency with which he pushed through the new constitution to fulfill these demands.

Last week, representatives of Madhesi parties waited all day long for the government’s negotiators. But they never showed up because they were too busy lobbying for their prime ministerial candidates. The new government should not take talks with Madhesi dissenters so lightly. This should be the foremost priority.

Oli must prove with his actions what he said before being elected Prime Minister. His clock is ticking.