The blockade that benefitted no one except smugglers

... but the damage it caused will stay on 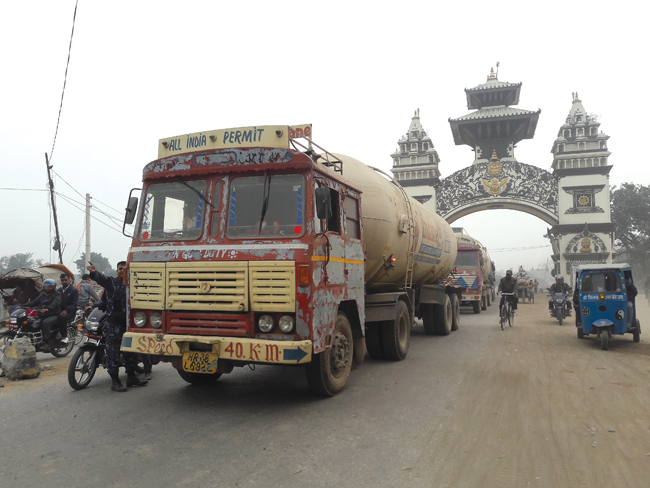 In September Madhesi parties left out of the constitution writing process decided to stage sit-ins at Nepal-India border check-points two days after New Delhi hinted that there could be obstructions.

There is ample proof that the blockade was not by the Madhesi parties alone, their agitation was used by New Delhi in its bigger strategic goal of reining in Kathmandu. The blockade was followed – not preceded – by the decision by the Madhesi parties to block and reopen the border. Indian police who had earlier allowed protesters to cross into India and hurl stones at Nepali riot police, last week helped burn down the bamboo barricades set up at the Birganj-Raxaul border bridge.

The Madhesi Front had no option but to call off its border sit-ins after it lost India’s backing. Even so, Front leader Mahendra Raya Yadav put on a brave face. He told me on Wednesday: "Do not assume that we are dead, we will strike back with even more force."

Now that the blockade has been lifted, it is important to ask who benefitted from this five-month siege of a landlocked nation still recovering from a devastating earthquake? The answer: no one but smugglers.

I put this to Surendra Labh, a Janakpur-based economic professor, who recently travelled across the Tarai to study the economic impact of the blockade. He confirmed what we all suspect: "If anyone has benefitted from the blockade, it is undoubtedly smugglers."

Labh says most unemployed youth who were riding bicycles till recently are now on brand new motorcycles purchased with income from black market fuel and Indian currency.

Smuggling became such a part of life, that Foreign Minister Kamal Thapa told a gathering of businessmen in January that if it was not for the smugglers, “the shortage of fuel could have been much worse”.

Nepal's ruling parties, against whom the blockade was imposed, survived the five months of siege by playing the nationalist card, engaging Madhesi dissenters in inconclusive talks, while negotiating directly with New Delhi. But they did not gain anything out of this crisis, either.

Nepal lost over 200,000 jobs, inflation hit double-digits, post- earthquake reconstruction was delayed and the economy was devastated to such an extent that it may take a decade to recover.

The Madhesi Front was the pawn in this Great Game of the blockade, and is probably the biggest loser. It consistently claimed to be the force behind the siege, but had to reluctantly relent when New Delhi put pressure to open the border. Manish Suman, General Secretary of Sadbhavana Party and MP, admits rather belatedly: "No one benefitted from the blockade, not even us."

Madhesi parties had calculated that Kathmandu’s rulers would be down on their knees within weeks of the border being blocked. "Little did we know that smugglers would rescue the government," Suman said.

One thing the Madhesi agitation has done is made ordinary people there angry with Kathmandu, and raised awareness among them about demanding equal rights in the new constitution. But India is unlikely to back them as strongly as it did this time.

India seems to have realized it went too far, and is on damage control mode. India's External Affairs Minister Sushma Swaraj held a meeting with Prime Minister Oli on Tuesday in Kathmandu. She was accompanied by India's National Security Advisor Ajit Doval, widely believed to be Modi's eyes and ears on Nepal and chief architect of the blockade. Oli is visiting India in the third week of this month.

But Madhesi parties want to keep up the pressure on Kathmandu and benefit from the momentum generated by the blockade despite the public mood in the Tarai being against another blockade or strikes.

The good professor Labh from Janakpur sums it up: "The common people in the Madhes will never want another blockade."

What's next in the Madhes?, Navin Jha