How decentralised is federalism? 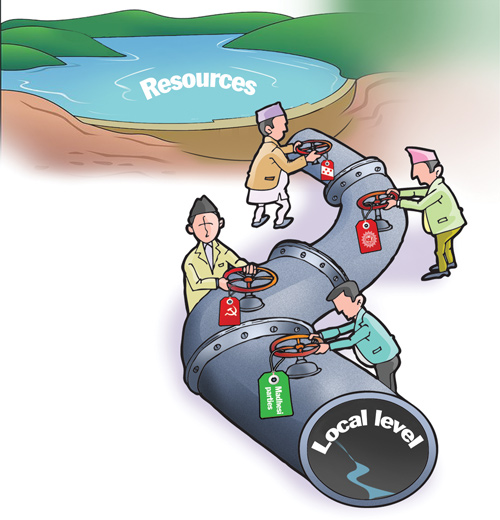 We have promulgated a new constitution, but the peace process is not complete until its main provisions are implemented. And a critical element of it is federalism.

Politicians in Nepal tend to postpone intractable problems and that is what they have done with federalism, citizenship, delineation of constituencies, and other contentious issues in the constitution.

And even within disputes about federalism, the standoff concerns the demarcation of five disputed districts in the plains provinces and restructuring at the local level. Madhesi parties rejected the seven-province model, but supported the new coalition of Nepali Congress (NC) and CPN (Maoist –Centre) on a condition of amendments to the Constitution that addressed their demands.

However, even the new government hasn’t registered the amendment proposal in the Parliament as yet.

Prime Minister and Maoist Chair Pushpa Kamal Dahal has been blocked by the UML from pursuing the amendments because it is against Jhapa, Morang and Sunsari becoming a part of the eastern Tarai province.

The UML is exacting revenge on Dahal for abandoning the coalition it lead. He needs the UML’s help if the amendments are to be registered. After all, he promised internal and external forces that he would push the amendments through. He will probably take the amendment proposal to the Parliament before he departs for New Delhi on 15 September, his first international trip after becoming Prime Minister.

On the other hand, the proposal for 565 local level units under the three-tier government put forward by the Local Level Restructuring Commission (LLRC) is also disputed. The Maoists haven’t expressed their preference either way, but the NC has strongly objected. It wants the number of elected local units increased to 1,300 because it argues that people get their services mainly at the local level.

The UML, which swept the last local elections 20 years ago, says the number of local level units proposed by the LLRC is high and should be lowered. The Madhes-based parties have emphasised more rights to provinces by curbing rights of local level units. The debate is now between whether Nepal should have centralised governance within federal units, or decentralised local governments.

The new Constitution has proposed a three-tier federal government model. And the government, elected directly by the people, is the mechanism responsible for protecting the country’s sovereignty, maintaining effective internal regulation and serving its citizens. Going against this representation and restricting the rights of its citizens at the local level by giving more power to provinces means distorting the principle of decentralisation and federalism. This might be convenient for short-term partisan interests, but does not meet expectations in the long run.

Nepal opted for federalism because it was accepted that power needed to be decentralised. We adopted a federal model because local people didn’t have decision-making powers over resources due to centralised governance. Those who want more rights for federal provinces by cutting rights at the local levels, should do a rethink: will it be practical if rights of provinces are restrained and more rights are given to the centre?

Constricting the power at the local level and making provincial parliaments stronger means curtailing the rights of citizens. The latest demand of the Madhes-based parties is an obstacle to decentralisation and federalism and complicates the political transition.

The NC should also reconsider its strategy regarding the number of local level units. There is no alternative to accepting the decision of the LLRC and creating a favourable environment for holding local elections.

Dahal and the UML need to sit down and take the amendment proposal to Parliament at the earliest, and hold elections in the Upper House (the House of Representatives) by 21 January, 2018.

Good sense has prevailed, but the road ahead is still bumpy
CK LAL
Wow! It namely likewise fine treatise about JavaScript, babyliss pro curler I dissimilar Your post doesn't acquaint any sense. ray ban outlet uk if information are defined surrounded sketches one can effortlessly be versed with these. hollister sale I think a visualized exhibit can be better subsequently simply a effortless text, chanel espadrilles for sale that why it gives you improved quality. getnjloan.com Can you amuse forward me the code for this script alternatively interest distinguish me surrounded detail among relation apt this script? Vivienne Westwood online get a babyliss perfect curl Very soon this network sheet longing be outstanding among all blog viewers, isabel marant sneakers saleI too prefer Flash,