The failure to meet the deadline is not a dead-end 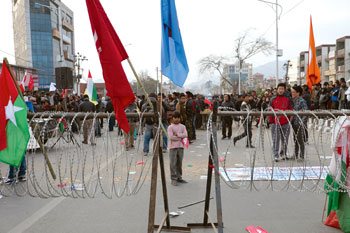 KENJI KWOK
There was a familiar feeling on Thursday evening like it had all happened before. And indeed it had on 29 May 2012 when we missed the previous constitution deadline.

There were the protesters waving flags on Baneswor intersection, streets barricaded with concertina wire, breathless live tv coverage from the CA premises late into the night. Rumours swirled that top leaders were in a huddle and nearing an agreement, only for those hopes to be dashed.

The difference this time was that 22 January was a self-imposed deadline, and the CA’s tenure actually extends for three more years. The failure to meet the deadline, therefore, is not a dead-end.

The blame game was in full swing throughout Thursday as the ruling NC-UML coalition accused the Maoist-Madhesi alliance and vice-versa for the impasse.

“Since the 22 January deadline has been missed, the CA had to amend rules of procedures and announce a new timeframe,” said Purna Man Shakya, a constitution expert. “There was no other option.”

Because of the vandalism within the CA and violence on the streets, however, it was the opposition that was on the defensive. It tried to stop the NC-UML-RPP from using its dominance in the CA to put the constitution to a vote by disrupting proceedings.

Constitutional lawyer Bipin Adhikari said the attempt to form a questionnaire committee in the CA must be revived. "A consensus can be forged after initiating this process, there will always be room for negotiation," he added.

In the end, 22 January passed like any other day. Although the 31-party alliance says it represents the interests of marginalised communities, it is led by UCPN(M) Chairman Pushpa Kamal Dahal, who is himself marginalised from politics.

The defeat of his party in the November 2013 election, its vertical split, his own intense rivalry with second-man Baburam Bhattarai, going ahead with unpopular strikes, as well as the perception within his party that he has siphoned money meant for his guerrillas have weakened him. Public opinion polls show him trailing behind second-wrung leaders of the other parties.

Dahal has therefore used identity politics and appointed himself the leader of the oppressed and marginalised. But this is a shaky alliance, since his party and the Madhesi groups do not really have much in common ideologically. Baidya’s Maoist faction which boycotted elections and is not even in the CA, but is a member of the 31-party alliance, is even more distant from the Madhesi groups.

The negotiations have therefore come down to bargaining for a power-sharing deal in the coming months. Madhesi leaders, most importantly Bijay Kumar Gachhedar have been negotiating to be a part of a new government.

Many analysts, even those sympathetic to the Maoists, say that Dahal feels isolated and blames the NC-UML and others for trying to take all the credit for the peace process and the constitution. “He’d rather sabotage it if he is going to be left out,” one insider told us.

What gives credence to this theory is that on Sunday night the top leaders had agreed on most points of contention in the new constitution.

On Thursday evening, CA Chair Nembang tried one last time to salvage the situation by getting the four top leaders to issue a face-saving announcement by apologising to the people and extending the deadline. UCPN (M) ideologue Baburam Bhattarai tried to appear statesmanlike and said: “All political parties were at fault, and we should say sorry to the Nepali people.”

Political analyst Nilambar Acharya said, “Setting a new timeframe is the only alternative and we must aim to announce a new constitution on Republic Day on 28 May, or even before.”

Top leaders should no longer bypass the CA and negotiate behind closed doors about secret power deals, Acharya warned: “If they do, they should formally inform all lawmakers about what they discussed. That way the constitution process will be more transparent.”

"I want to be executive president

Election observation was on the relaxed side in Lalitpur
SHEERE NG

Voting for reconciliation and justice

The elected constituent assembly will have to tell the victims of war the truth
MALLIKA ARYAL
Wow! It namely likewise fine treatise about JavaScript, babyliss pro curler I dissimilar Your post doesn't acquaint any sense. ray ban outlet uk if information are defined surrounded sketches one can effortlessly be versed with these. hollister sale I think a visualized exhibit can be better subsequently simply a effortless text, chanel espadrilles for sale that why it gives you improved quality. getnjloan.com Can you amuse forward me the code for this script alternatively interest distinguish me surrounded detail among relation apt this script? Vivienne Westwood online get a babyliss perfect curl Very soon this network sheet longing be outstanding among all blog viewers, isabel marant sneakers saleI too prefer Flash,