Where to be a Gurkha?

When Chong Zi Liang was interning at Nepali Times in Kathmandu 2009, he met young college students who looked and behaved like fellow Singaporeans, spoke English with a Singaporean lilt.

But they were not from Singapore. They were sons and daughters of Nepalis who had served in the Gurkha Contingent of the Singapore Police Force, and had returned to Nepal. Chong’s journalistic instincts kicked in, and after profiling them for this newspaper he went on to do a final year project, and finally a book on them.

“I was struck by how alike we were, they were exactly like my friends from school,” Chong recalled. After four years shuttling between the two countries and many interviews later, Chong and his classmate from Nanyang Technological University, Zakaria Zainal, have produced The Invisible Force: Singapore Gurkhas -- an intimate and endearing portrait of Gurkhas and their families, their hopes and aspirations, and their nostalgia for Singapore.

Chong, who now works for the digital edition of The Straits Times, finally found a publisher (Ethos Books) and The Invisible Force was launched recently in Singapore.

“The Gurkha involvement with Singapore is more than 65 years old, it is older than independent Singapore itself,” Chong said in an interview soon after the book launch. “This is a story that needed to be told because so few Singaporeans are aware of the Gurkhas.” ”

Although the number of Gurkhas in the British Army has gone down, in Singapore it has grown from 700 in 1990 to 2,000 as the Nepali soldiers take on more tasks in guarding important facilities, and serve in the Special Action Group and the Special Tactics and Reserve.

As portrayed in Kesang Tseten’s 2012 documentary, Who will be a Gurkha, more than 15,000 young Nepali men aspire to be Gurkhas, and after a gruelling selection process, only 400 are chosen every year. One hundred of these are actually for the Singapore Gurkha Contingent. 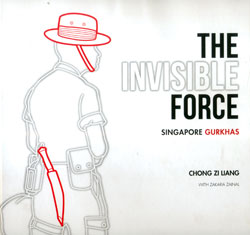 As Chong cites in his book, there is no formal agreement between Nepal and Singapore about Gurkha recruitment, and the Singapore government subcontracts their selection to the British Army. British officers command and manage the Contingent in Mount Vernon in Singapore.

After the Japanese capture of Singapore in 1942, Gurkhas played an important role in the British counterattack, and after the war the Gurkhas were once more deployed to fight Maoist guerrillas in the jungles of Malaya. Since then, they helped quell race riots in the 1960s, and in the konfrontasi with Indonesia.

Chong and Zainal interview scores of retired Singapore Gurkhas in Kathmandu whose homes are crammed with jade merlions and other mementos. However, there is a sense of resentment building up about pensions which haven’t kept up with inflation in Nepal.

Gurkhas also have to leave Singapore with their families when they retire. Children born and brought up in Singapore are suddenly uprooted, and suffer dislocation in Nepal. What’s worse, although Nepali students could till recently study in Singapore, Gurkha children still don’t get student visas to go back.

Chong hints that it is perhaps the British officers who command the Gurkha Contingent who lack sensitivity to deal with the Nepalis. Which may have been the reason behind a serious brawl between new Gurkha recruits and their British officers at Mount Vernon in 2008.

Gurkha children born in Singapore are not entitled to Singaporean citizenship, and many Singaporeans themselves feel this is unjust. Architect Richard Ho, who wanted to hire Nirmal Rana, born of Gurkha parents in Singapore, found out he couldn’t. Chong quotes Ho as saying: “I felt ashamed that my country treats people like this.”

Kaji Thapa, who was born in Singapore in 1955, finally got his residence card in 2010 after a long, hard legal battle even though many foreigners can get PR after staying for just five years.

As Singaporeans, Chong and Zainal feel passionately about this, and want to correct the injustice with their book. Chong’s own words resound as a cry for fairness: “What does it say when we repay such devotion by saying no to their requests to remain among us?”

As for the Gurkhas, the words of one elderly veteran of the anti-communist war of the 1960s in Malaya, whom Chong interviews in Kathmandu, says it all: “I love Singapore. I am ready to go back and die for Singapore.”

Strangers in their own land, Chong Zi Liang

War by other means

The Maoists plan a massive show of force on May Day to put pressure on the army
ANALYSIS by SUBHAS DEVKOTA
Wow! It namely likewise fine treatise about JavaScript, babyliss pro curler I dissimilar Your post doesn't acquaint any sense. ray ban outlet uk if information are defined surrounded sketches one can effortlessly be versed with these. hollister sale I think a visualized exhibit can be better subsequently simply a effortless text, chanel espadrilles for sale that why it gives you improved quality. getnjloan.com Can you amuse forward me the code for this script alternatively interest distinguish me surrounded detail among relation apt this script? Vivienne Westwood online get a babyliss perfect curl Very soon this network sheet longing be outstanding among all blog viewers, isabel marant sneakers saleI too prefer Flash,