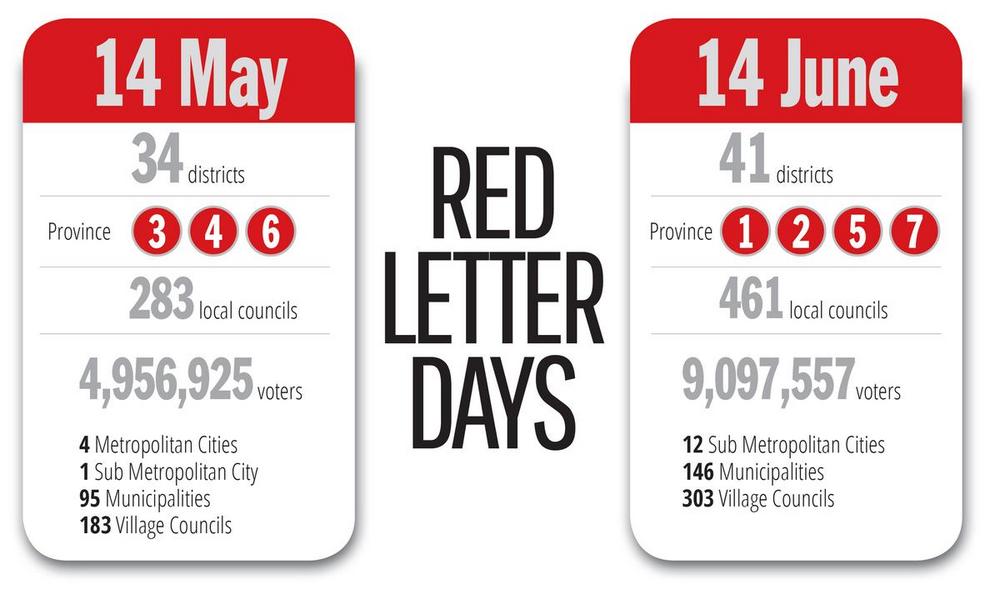 After two lost decades, Nepalis are finally getting ready to vote in local elections for 481 Village Councils, 246 Municipalities and 17 Metropolitan Cities. In the two-phased elections on 14 May and 14 June, nearly 14 million citizens will be casting their ballots for the first time under the new Constitution, for representatives in new local structures.

Many voters were just one year old when the last local elections were held in 1997. Those who were about to be eligible to vote then are today in their 30s. The Maoists decimated elected local councils, and the royal regime cancelled scheduled local polls in 2002. Some 9 million people are voting for the first time in their lives in local elections. The polls will be held in two phases as a compromise, to give time to prepare for Tarai-based parties, who had been threatening to boycott polls unless their demands for amendments to the constitution were met first.

This election is important also because Nepalis will be voting not for Village Development Committee (VDC) and District Development Committee (DDC) , which were effectively just local administrative units, but they will select representatives for self-governing Ward, Village, Municipal and Metropolitan councils. Under the new Constitution these are empowered to make laws, raise revenue and fix policy. There are also quotas for women and candidates from the Dalit community, and although more than 90 per cent of candidates to head village and municipal councils are men, parties are obliged to nominate a woman for one of the two senior local posts. 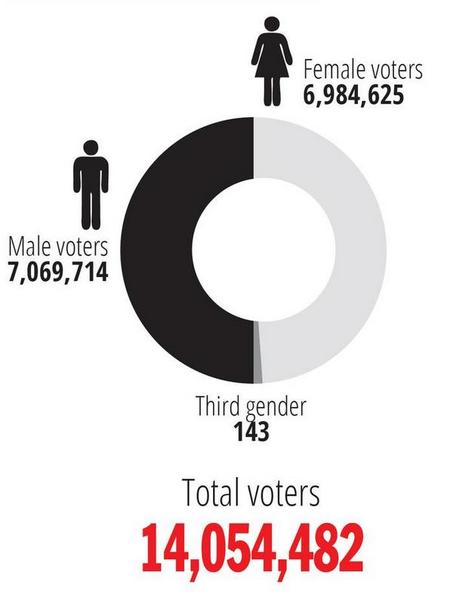 Whatever happens in the provincial and parliamentary elections slated for 2018, the foundations for rural development and grassroots democracy are being laid on Sunday and 14 June. 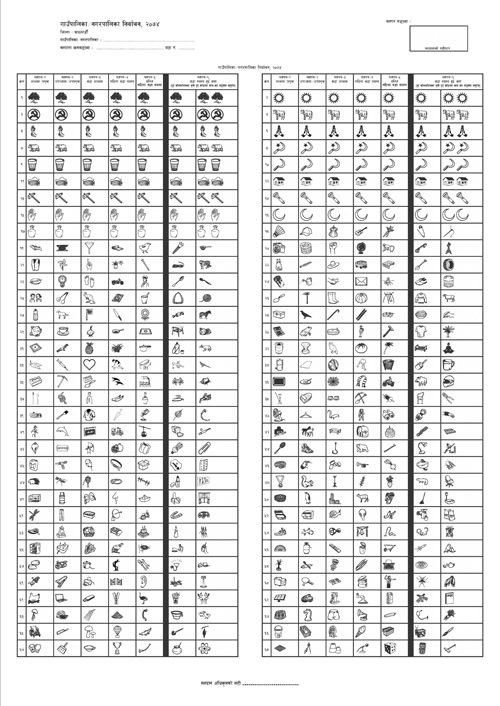 With Zero Hour in effect, candidates had to stop all campaigning as of midnight on Thursday till polling day on Sunday morning when booths will open in three provinces conducting the first phase of polls.

There is still lingering confusion among voters about how to vote correctly. In Kathmandu, the ballot paper is the size of a broadsheet newspaper. The swastika stamp has to be placed on seven boxes, and the paper folded in the proper way.

Much of the confusion stems from the use of two election symbols in the seventh column of the ballot paper (pictured). The Election Commission (EC) published a front page notice in major Nepali dailies on Thursday to try to clear the confusion explaining that the parties that have a seat in Parliament must use one symbol and the EC needed to use two of the same symbols in the seventh column to differentiate one ward committee candidate from the other.

The parties that have no seat in Parliament and independents have to use different symbol for each of their candidates. So there is just one symbol in the seventh column for their candidates. So, voters will have to stamp just once in the seventh column although there are two election symbols. The EC says it has been using the mass and social media to educate voters, but at least for Kathmandu Valley voters may feel like they are giving a multiple choice exam when they vote on Sunday.

A survey in all 32 wards of Kathmandu Metropolitan City last week by the mobile polling group Rooster Logic found that there is considerable enthusiasm for local polls, but also a lack of knowledge about locations of polling booths and how to use ballot papers. The results showed a worrying lack of interest among young people 18-25, more than three-fourths of whom said they would not vote. However, 65 percent of the 394 respondents in the sample group surveyed through mobile phones said they would vote because it was important in a democracy.

Most respondents didn’t know or didn’t care about their party preferences. But Kathmandu being a traditional Nepali Congress stronghold, it was not surprising that 61 percent of those who would vote said they supported candidates with the Tree symbol. The UML and Maoists trailed behind, while Bibeksheel showed a small blip. The newly-formed Sajha Party of Rabindra Mishra and Baburam Bhattarai’s New Force did not register in this mobile phone survey.

Rooster Logic used a digital tool called REMO (Research and Monitoring) software to work with a network of enumerators called Sukarmis to not just collect data from the field rapidly through mobile devices, but instantly aggregate and analyse it. Rooster Logic also conducted exit polls after the 2013 constituent assembly elections. This survey was conducted 25-27 April in all 32 wards of the Kathmandu Metropolitan area, using stratified random sampling of representative proportions of gender, age and ethnicity.

The questionnaire measures quantitative responses for perception and potential voting action of respondents. The questionnaire does not measure, in any way, variables that have direct or indirect impact on the outcome of elections, favour certain parties or personnel or try to create public opinion. 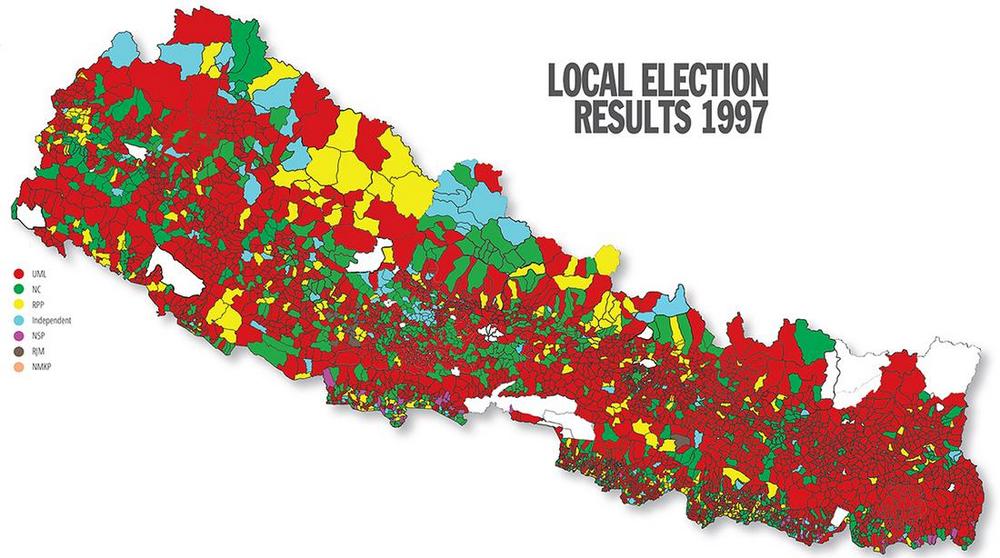 When Nepal held its last local elections in 1997, the Maoist war had just begun. The insurgents disrupted polls in their ‘base areas’ of the mid-western mountains, and voting had to be rescheduled. Some VDCs couldn’t hold elections at all. There were 12,538,273 voters in 58 municipalities and 3,913 VDCs. 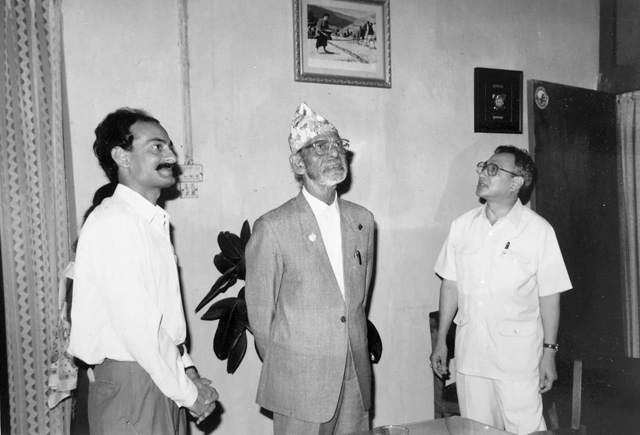 The UML swept local polls,riding the wave of popularity of its Chair, Manmohan Adhikari, who in his nine-month tenure earned an image of a benevolent and pro-poor Prime Minister.

The Adhikari government’s scheme to provide social security allowances to the elderly, widows and disabled persons became so popular that none of his successors from rival parties could outdo it. He launched the ‘Let Us Build Our Villages Ourselves’ campaign, and increased the budget for local bodies.

In 2002, when the tenure of the last local bodies expired, Sher Bahadur Deuba’s government under King Gyanendra did not announce another election, using the insurgency as an excuse. But many believe that the real reasons were that the UML would make a clean sweep, and because the Maoists had killed or chased away many local NC leaders from the districts.

Who won where in 1997?
Create pie charts 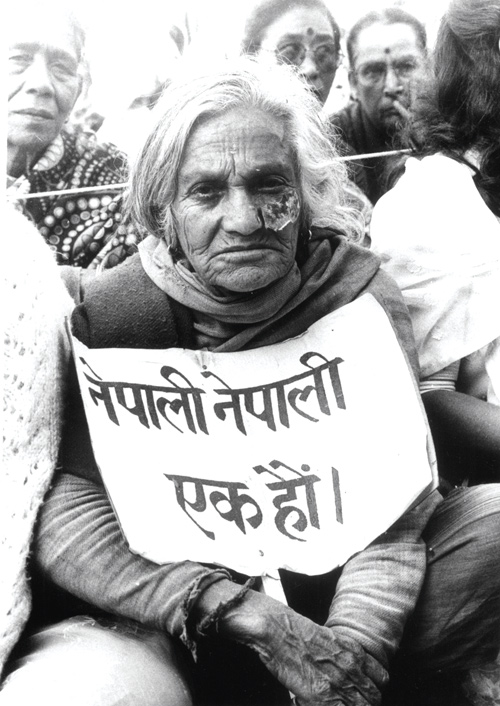 Although the first local elections in Nepal were held towards the end of the Rana reign in 1947, and women got the right to vote in first municipal polls in Kathmandu in 1953, it was not until 1959 that the first party-based local elections were held. The Nepali Congress won the chairmanship of Kathmandu Municipality and the deputy position went to the Nepal Communist Party.

After King Mahendra’s coup in 1961 and during the Panchayat System, three-tier Village, District and Municipal elections were held from 1962 onwards. After the People’s Movement of 1990, the following local polls were held:

1992 Village Panchayats were renamed Village Development Committees and elections were held for 3,995 VDCs, 75 DDCs and 33 Municipalities. The Nepali Congress swept the elections, winning 60 of the 75 districts.

1997 By the time the next local elections were held, the tables were turned and the UML swept 36 of the 75 districts, leaving the NC with only 22. The UML also won 41 of the 50 Municipalities.

2005 King Gyanendra tried to hold local elections after his coup, but this was boycotted by most parties.

Think before you shoot
DEEPAK ACHARYA

The economics of politics

The economics of politics
Wow! It namely likewise fine treatise about JavaScript, babyliss pro curler I dissimilar Your post doesn't acquaint any sense. ray ban outlet uk if information are defined surrounded sketches one can effortlessly be versed with these. hollister sale I think a visualized exhibit can be better subsequently simply a effortless text, chanel espadrilles for sale that why it gives you improved quality. getnjloan.com Can you amuse forward me the code for this script alternatively interest distinguish me surrounded detail among relation apt this script? Vivienne Westwood online get a babyliss perfect curl Very soon this network sheet longing be outstanding among all blog viewers, isabel marant sneakers saleI too prefer Flash,