International spotlight on mistreatment of Nepali workers is leading to labour reform, but much needs to be done 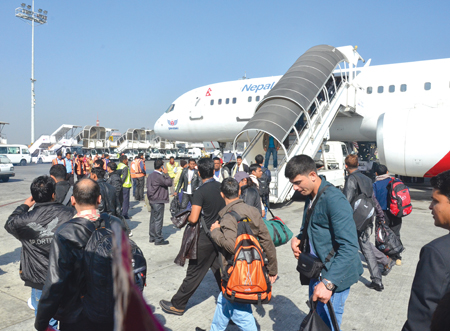 Bartender Aim Upreti emptied a beer and excitedly divulged that he was leaving for Qatar the next day. He had impressed the recruiters with his bartending résumé and had been promised a job in a five-star hotel in Doha.

That night, his last working in Thamel, Upreti danced and sang along to the music as he served customers and poured drinks. He couldn’t wait to start his new life.

Each month, 16,000 Nepalis leave the country to work in the Gulf. One in every three families in Nepal has someone working abroad and sending money home.

Remittances form nearly a quarter of Nepal’s GDP. However, recent international exposes have revealed harsh conditions many workers face abroad. It has been called ‘modern-day slavery’: workers, especially those in construction, live in cramped, insect-infested housing with poor access to both sanitation and cooking facilities.

They often work long hours in gruelling conditions -- sometimes up to 16 hours a day for paychecks that are frequently late. In Qatar alone, 400 Nepali workers have died in the past three years.

The responsibility for ensuring labour conditions and workers’ rights lies on the shoulders of the country of employment. The exploitation, however, begins at home, in the recruiting agencies in Nepal.

“Everyone is looking for money,” said Som Prasad Lamichhane, general secretary of Pravasi Nepali Co-ordination Committee which works for the rights of migrant workers. “Recruiting agencies take fees from workers and send them abroad where their contract may be different than promised,” he said, “This is a huge problem.”

According to government regulations, a recruiting agency may only charge up to Rs 80,000. But some charge more than double that, and Lamichhane said, workers will sometimes sign contracts in Nepal only to find on arrival at the host country airport that there is no job, or that the pay and job description is not what was agreed.

“There are 761 manpower agencies in Nepal but only about 400 of them are registered,” said Lamichhane. “The monitoring system is very weak even among the registered ones. Our government needs to take more responsibility.”

Abdul Sattar of Manpower Middle East which recruits Nepali workers, agreed. The Labour Department must approve all his foreign employment contracts, but most of the follow-up monitoring is left to recruiting agencies.

“The monitoring system is effective,” explained Sattar, “recruiting agencies are just the middlemen. It’s up to the government to solve the problems, we cannot do anything.”

There is nothing stopping recruiters to make immediate changes to ensure better working conditions abroad, but the problem is a lack of incentives, explained Kathmandu-based journalist Pete Pattisson who broke the original story in The Guardian about Nepalis in Qatar earlier this year.

“First of all, they could only deal with recognised, trustworthy brokers. That itself is a massive step,” said Pattisson. “They need to be more rigorous in vetting the companies that they do business with.”

Other improvements would be to formalise the relationship between the agencies and local brokers abroad, charge appropriate recruiting fees and guarantee minimum wages in all contracts.

Recent coverage in the international press, and with spotlight on construction related to the 2022 World Cup, there are signs the Qatar government is taking notice. The Qatari Attorney General was in Kathmandu last month to meet senior officials.

Nepali officials are aware of the problems and the need to protect its citizens, but are reluctant to give a higher profile to the issue for fear of retaliation from the Qataris.

Said Pattison: “The Nepal government also knows that people are looking at them for answers. The question is whether it will deliver.”

A glimmer of hope in the Gulf

International media attention on construction workers from South Asia has heightened with Qatar preparing for the 2022 World Cup, the completion of the New York University (NYU) Abu Dhabi campus, and the Louvre and Guggenheim museums being built.

The impetus for change is largely external, international criticism and widespread scrutiny is creating pressure for change from the governments involved. 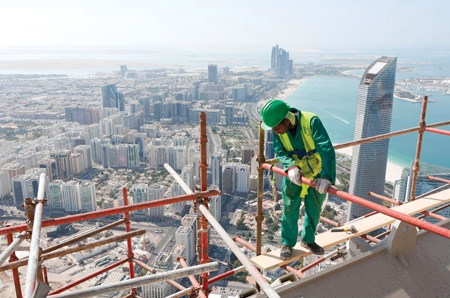 On 20 July, Qatar announced plans to improve labour laws with tighter regulations and a ban on working under excessive temperatures and increased fines for employers who confiscate workers’ passports, and a new system of electronic payments directly to employees’ bank accounts.

Amendments were also proposed to the current kafala system, where workers are tied to their employer and can neither change jobs nor leave the country without permission. However, no time frame was given for the implementation of these reforms.

In June, with the completion of NYU Abu Dhabi’s controversial new campus on Sadiyaat Island, an email was sent by the university’s Vice Chancellor in New York to the student body announcing an investigation into allegations of labour standard violations.

Before construction of the campus began, NYU had announced a Statement of Labour Values regarding wages, conditions and working hours and were assured the contractors were upholding the standards, but violations were exposed by The New York Times shortly before completion of the campus. The international investigation firm Nardello & Co is heading the inquiry but has not yet published its findings.

In Nepal, the Department of Foreign Employment has promised to tighten the regulation of recruiting agencies in the coming months. It hopes to impede fraudulent agencies by making it compulsory for all contracts between migrant workers and agencies to be signed in the presence of a government official. At the moment, the provision would only apply to those going to Oman, but plans are underway to expand it to other Gulf countries as well.

Such reforms, both from nations sending and receiving workers, is just the beginning. And the world is watching because high-profile football tournaments, famous universities and museums are involved. But more importantly, workers’ rights need to be respected by both the home and host countries.

Too little, too late, Bhrikuti Rai and Sunir Pandey

Now that Nepal is in the hot seat, he must use this historic opportunity
CK LAL

Making the Valley's unique artistic heritage pay for its own upkeep

Editorial in Janadisha, 7 June
Wow! It namely likewise fine treatise about JavaScript, babyliss pro curler I dissimilar Your post doesn't acquaint any sense. ray ban outlet uk if information are defined surrounded sketches one can effortlessly be versed with these. hollister sale I think a visualized exhibit can be better subsequently simply a effortless text, chanel espadrilles for sale that why it gives you improved quality. getnjloan.com Can you amuse forward me the code for this script alternatively interest distinguish me surrounded detail among relation apt this script? Vivienne Westwood online get a babyliss perfect curl Very soon this network sheet longing be outstanding among all blog viewers, isabel marant sneakers saleI too prefer Flash,