In the last 10 years, Nepal’s infant and maternal mortality rates dropped dramatically, and with it the proportion of children physicially stunted due to lack of food also decreased from 58 per cent to 40 percent. And one of the reasons undernutrition still remains high is because of teenage pregnancy.

Public health experts have found that even in places where children have enough food, malnutrition remains unacceptably high. In India and Nepal, for instance, there is a strong correlation between stunting and open defecation.

And here in Sindhupalchok district, northeast of Kathmandu, the lack of progress in stopping child marriages appears to be affecting the nutrition of both mothers and their babies.

It takes all day for Female Community Health Volunteers (FCHV) to walk from one village to another, so health workers are training new mothers at the sub-health post at Ichok, 10 km from Melamchi bajar, to take care of themselves and their babies.“We keep talking about 1000-day mothers, but how does one arrive at the number?” Gyanendra Ghorasaini, a trainer, asks 21 young mothers who are attending with their babies. A hand goes up in the corner: “It’s 270 days of pregnancy plus the 730 days until our babies turn two.”

Ghorasaini is pleased with the correct answer, and other mothers nod with understanding. Studies have shown malnutrition in the mother during pregnancy and in the baby after birth hampers brain development, making children slow learners. If breastfeeding mothers and pregnant women don’t have access to the right nutrients, they are more likely to have children with inadequately developed brains.

To prevent this, new mothers in Ichok are taught to practice “Harek bar, khana char” (four meals a day). These meals must comprise of vegetables, greens, grain, milk, meat, or eggs. But not  everyone can afford to feed themselves and their livestock and poultry, and it is particularly more difficult for younger mothers without support at home.

Anu Lama worked as a nanny in Kuwait for two years, and at 19 is already a mother of a four-month-old daughter. The family farm hardly produces enough to feed her and her baby four meals a day and she can’t afford to buy feed for the chicken to make them grow faster. Her husband works in India, and his mother is an alcoholic. Her sister-in-law is pregnant, too, so Anu has to do all the house and farm work carrying her baby around.

Across the Indrawati River in Majhgaun, a village of the Danuwar ethnic group the situation is even more dire. Most mothers here are school dropouts, the result of early marriage. Their uneducated husbands barely earn enough as menial labourers to feed both mother and child. 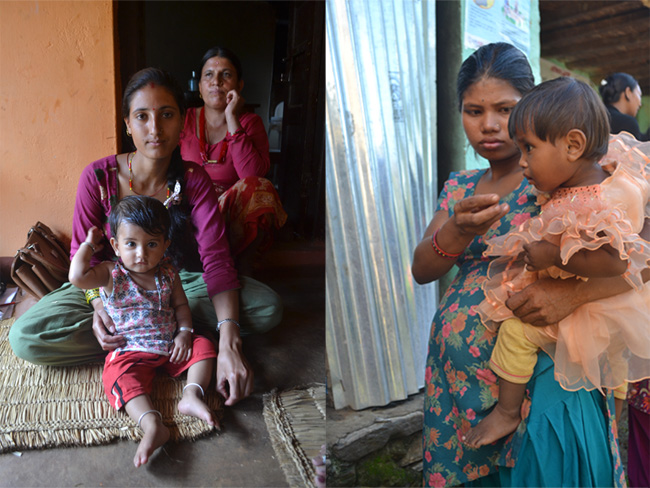 STARK DIFFERENCE: Supported by her parents-in-law, 21-year-old Anita Dulal Thapa (pic, left) and her baby have been so healthy for the last 11 months that the entire Thapa family was named ‘model family’ by health workers in Melamchi. In contrast, Sharmila Danuwar, 17, (pic, right) is soon to deliver her second child.

Sharmila Danuwar (pic) was married at 15 and has a 15-month-old daughter. The delivery was complicated because Sharmila’s body wasn’t ready for childbirth. Two years later, she is eight months pregnant again.

Isha Danuwar, 17, has a one-month-old baby who was born with deformed feet. Sangeeta Danuwar was married at 16 and already has a six-month-old baby. Maya Danuwar is 21 and has two children, three and two. None of these young mothers can afford four meals a day.

But with enough support at home, some young mothers are healthy and well-fed. Anita Dulal Thapa (pic) of Goregaun was married off at 18 and had her baby at 21. Her husband works in India but his parents treat her like their own daughter. She gets time off from housework to study. There is enough milk, grain, greens, and vegetables to feed mother and baby.

“Such cooperation is rare here, particularly when the sons are not at home,” says Bikash Shrestha of Suaahara Nepal which works with 1000-day mothers like Anita, whom he has named a ‘model mother’.

For families less fortunate, VDC Secretary Krishna Bahadur Gyawali has been been allocating a part of the annual budget to train pregnant women and new mothers about growing their own greens. Over 200 thousand-day mothers are now growing tomatoes, beans, pumpkins, cucumbers, and spinach to augment their diet, and Gyawali believes other VDCs in the district could also take similar initiatives.

Says Gyawali: “This money was previously spent on meetings and trainings where the usual suspects turned up. What we have tried to do is spend it on those who need it the most.”

Peace talks for all

She struggles as she always has, not expecting any help.
MEGH RANJANI RAI

Barbara Admas in Jana Aastha, 26 February
Wow! It namely likewise fine treatise about JavaScript, babyliss pro curler I dissimilar Your post doesn't acquaint any sense. ray ban outlet uk if information are defined surrounded sketches one can effortlessly be versed with these. hollister sale I think a visualized exhibit can be better subsequently simply a effortless text, chanel espadrilles for sale that why it gives you improved quality. getnjloan.com Can you amuse forward me the code for this script alternatively interest distinguish me surrounded detail among relation apt this script? Vivienne Westwood online get a babyliss perfect curl Very soon this network sheet longing be outstanding among all blog viewers, isabel marant sneakers saleI too prefer Flash,