Hover over the map for photos and number of casualties. (Map: Ayesha Shakya)

The devastating death toll from this week’s blizzard and avalanches in the Annapurnas has once more highlighted the urgent need for weather early warning for trekkers in the Himalaya.

Till press time on Thursday, 32 people were confirmed dead in Manang and Mustang, with 85 still unaccounted for. There is still no word on dozens of trekkers who were planning to cross Larkya La in the Manaslu circuit on Tuesday.

This is not the first time blizzards and avalanches have hit the high Himalaya in recent years. Post-monsoon typhoons from the Bay of Bengal have been particularly disastrous. In November 1995, 13 Japanese trekkers and 11 Nepali guides were killed as they slept during a blizzard on the Gokyo trail. In October 2005, 18 Nepali and French climbers were killed in an avalanche on Kang Guru in Manang. 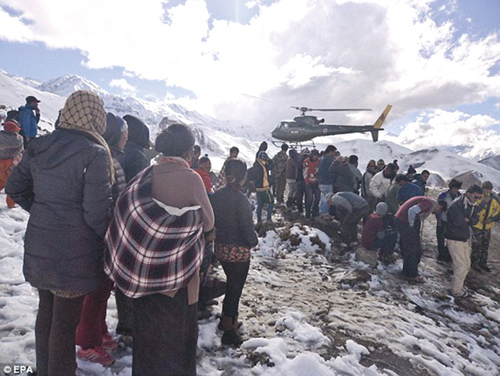 DISASTROUS AUTUMN:The storm came in October, when locals and trekkers least expected it. Nepal Army helicopters arrived on the morning after to ferry out the survivors of the blizzards and avalanche in Manang.
Nepal Army
The casualties among trekkers in blizzards and floods tend to be higher in the peak autumn season, since heavy rains are not expected. However, weather experts say October is when trekkers and mountaineers have to most careful because it is the cyclone season in the Bay of Bengal.

“Given that there is mobile and internet access along the Annapurna circuit, you cannot blame weather alone,” says climate analyst Ngamindra Dahal, “this wasn’t a surprise storm. The real question is why weren’t the warnings heeded?”

Indeed, Indian and Nepal meteorological offices had been warning about heavy precipitation from the remnants of Cyclone Hudhud as it veered north towards Nepal ever since it made landfall on 12 October. International tv channels warned of heavy rain in western and central Nepal. Two days before the storm arrived, Nepali media had warned farmers to protect their harvests.

The information was there, but it doesn’t seem to have got to the trekkers high up behind the Annapurnas. The question is why.

One reason could be that weather forecasts are usually unreliable and Met offices have cried wolf so often that many people ignore the warnings. Also, for a country that is so dependent on trekking and mountaineering, there isn’t a formal channel to provide official and dependable early warning to people in the mountains. Since climate change is making weather more unpredictable globally, there is all the more reason to have multidisaster preparedness systems in place. 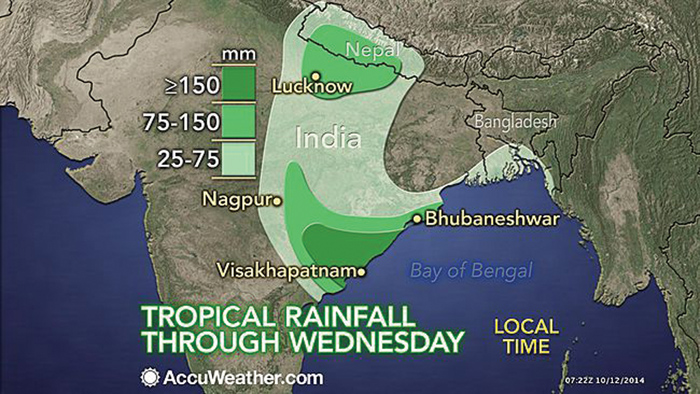 WE WERE WARNED: Weather forecast maps like this one by metereologist Eric Leister predicted two days before the storm hit Nepal: ‘the core of the heaviest rain into the middle of the new week will likely sweep to the northeast toward the India-Nepal border’.

While trekkers in Chame and Manang watched weather reports on tv or on mobile internet, up the valley lodges do not have electricity and there is no phone signal. Trekkers at Thorung Phedi or Kangshar would essentially have been incommunicado unless they had satellite phones.

The Annapurnas had seen a spell of brilliantly clear and crisp autumn weather till Sunday, which suddenly turned overnight. By the time the blizzards hit on Tuesday 14 October, many trekkers and their guides were trapped high up on the passes.

Former British Gurkha officer and avid trekker Gen Sam Cowan says the Thorung or Larkya traverses are closer to mountaineering, with the very high and exposed mountain passes requiring long commitment at high altitude, and allowing plenty of time for the weather to change rapidly for the worse.

“If it looks bad, it probably is going to be bad,” says Cowan, and advises, “stay put in your tent or shelter, wait for one day or two. To hell with the flight home. No one should have ventured out to cross Thorung La with the weather as threatening as it was, nor should their trekking guides have allowed it.” 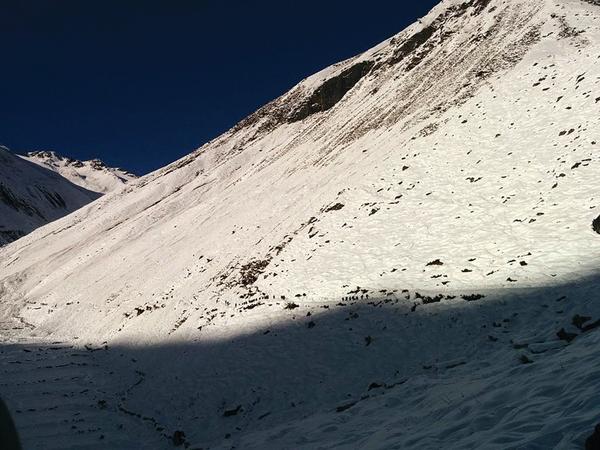 Hundreds of trekkers are still stranded in the Manaslu Circuit where hikers on the trail look like ants amidst the snow cover in a picture taken on Wednesday morning.
Suraj Shakya

The other aspect is proper disaster planning with preparation and proactive dissemination of early warning of weather. In 1999 when a cyclone hit the coast of Odisha in India, 10,000 people were killed, but with new satellite-based early warning, communications and mandatory evacuation of coastal areas there were minimal casualties during cyclones Phailin in 2013 and Hudhud this year even though physical damage from both storms were huge.

It is not enough for the authorities to know about approaching weather through weather satellite imagery, they need to communicate this quickly and effectively to people and visitors on the mountains. In Nepal, this could be done through the media, networks like the Trekking Agencies’ Association of Nepal (TAAN), Nepal Mountaineering Association, Himalayan Rescue Association, or even telecom companies which can send warnings through mass texting to selected parts of the country.

In the high mountains of Nepal there are telecommuncaiton blind spots, which means trekkers may not receive warnings. To get around this, it could be made mandatory for huts at Thorung Phedi or below Larkya to have CDMA phones. Trekking groups on passes above 5,000m could be required to carry satellite phones.

Says Cowan: “Sadly, it is all so obvious but people think that because it is trekking, they can take chances. You can never do that in the high mountains where the weather can change so quickly.”

If we cant find a solution, let others help us do it

Its simpler than some make it look
PRAVIN RANA
Wow! It namely likewise fine treatise about JavaScript, babyliss pro curler I dissimilar Your post doesn't acquaint any sense. ray ban outlet uk if information are defined surrounded sketches one can effortlessly be versed with these. hollister sale I think a visualized exhibit can be better subsequently simply a effortless text, chanel espadrilles for sale that why it gives you improved quality. getnjloan.com Can you amuse forward me the code for this script alternatively interest distinguish me surrounded detail among relation apt this script? Vivienne Westwood online get a babyliss perfect curl Very soon this network sheet longing be outstanding among all blog viewers, isabel marant sneakers saleI too prefer Flash,