After a meal a Krishnarpan, one may need help getting up from the cross-legged position
Someplace Else by Sonia Awale 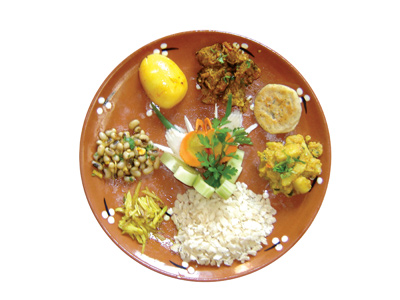 After a long trek in which the staple fare is dal bhat the last thing visitors to Nepal may want is a dinner of rice, lentils and chicken curry. Or Nepalis may feel they can easily eat dal bhat at home so they don’t need to go to Krishnarpan at Dwarika’s Hotel.

How wrong they will be. Krishnarpan is unlike any other Nepali eating place in Kathmandu or around the world: it is a true pan-Nepali restaurant reflecting this country’s ethnic and culinary diversity. You don’t dine like this on treks, and this is an ideal place for Nepalis to bring foreign guests for a taste of Nepal.

The ambience at Dwarika's, Kathmandu’s multi-award winning heritage hotel is exquisite. The waitresses are dressed in the costumes of Nepal’s Magar, Newar, Gurung, Chhetri and Sherpa communities. The word that comes to mind is ‘classy’ and Krishnarpan also thinks big: it offers six, nine, 16 or 22 course meals. Warned beforehand about the sumptuous and scrumptious offerings, we opted for the modest six-course meal even though we were ravenously hungry.

The meal starts, as the restaurant’s name suggests, with an offering to lord Krishna. We devote to the Gods bits of Wo, soybean, garlic, potato dish from the Newari Samye Bajee (pic, left) course which is an assortment of legumes, spices, vegetables and meat traditionally used in religious ceremonies and later distributed among devotees.

The Aila is poured by a waitress in traditional Haku Patasi from a long-neck brass vessel in a thin, long perfectly aimed trajectory directly on tiny clay Salincha in which the Aila froths majestically. We first sprinkle drops of the spirit to the Gods, and then take sips of what can only be described as rocket fuel to wash down the raw marinated Choyela water buffalo dish. But the chef has decided to fry the meat keeping the clientele in mind. 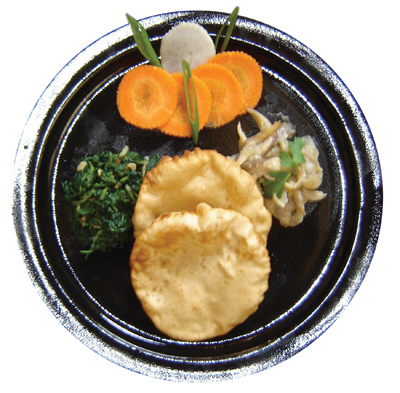 The second course (pic) is from the Tarai and is made up of deep fried Puri, and a spicy dish made of potatoes and chick peas. The Puri could have been softer, but the mushroom and cheese side dish made up for it by melting marvelously in the mouth. The next course were Momos, whose Tibetan antecedents represented the cuisine of northern Nepal. Both the buff and veggie momos were succulent and the chutney hit all the right notes. The dumplings rested on a bed of betel leaf which we had fun nibbling at. The mixed vegetable soup came next, and it was just as described – liquid veggies. Thick and green, the texture didn’t exactly scream ‘tasty’ but ‘wholesome’ was the word that came to the tongue after the first spoonful.

We didn’t have much space left in our tummies when the main course arrived, and we admired the guests in the next table who ordered 22-course repasts. The dish had rice (both brown and white), yellow lentil gravy, chicken or fish curry, sweet-gourd and soybean with thick gravy, stir-fried potato and sautéed spinach, Mismas Achar and Lapsi chutney. All grown organically by Dwarika’s and made with Himalayan herbs. Not much to write home about for most Nepalis, but an overdose of exotica for visitors.

The last course of yoghurt with pudding and fresh fruits was light and appealed to the sweet tooth. The Haluwa samoline pudding was not greasy nor overly sweet, the Sikarni yoghurt flavoured with cinnamon was refreshing for our sated appetites.

After a meal like that, one may need help getting up from the cross-legged position, but manage to stand up we did. Krishnarpan has a guest book and a red clay brick token with one of the Astamangal, eight lucky symbols carved on it. You can also take the menu home as a souvenir and if you are a frequent visitor you get a personalised apron with your name embroidered on it. Krishnarpan is open only for dinner and reservations are suggested. The six course is $38, while $46 for the nine course, $56 for 16 and $65 for 22 courses. Plus plus.

How to get there: Krishnarpan is located inside Dwarika's Hotel at Battisputali.

Bhutani refugees wait for their fate to be decided
NARESH NEWAR
Wow! It namely likewise fine treatise about JavaScript, babyliss pro curler I dissimilar Your post doesn't acquaint any sense. ray ban outlet uk if information are defined surrounded sketches one can effortlessly be versed with these. hollister sale I think a visualized exhibit can be better subsequently simply a effortless text, chanel espadrilles for sale that why it gives you improved quality. getnjloan.com Can you amuse forward me the code for this script alternatively interest distinguish me surrounded detail among relation apt this script? Vivienne Westwood online get a babyliss perfect curl Very soon this network sheet longing be outstanding among all blog viewers, isabel marant sneakers saleI too prefer Flash,