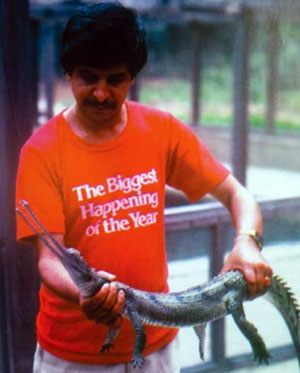 FIRM GRIP: Hemanta Mishra with a gharial bred in captivity in Chitwan in 1977 before releasing it into the wild.
In Hemanta Mishra’s new guide book to Chitwan, there is a striking aerial view of the Inner Tarai valley probably taken from a flight to Meghauli in the 1970s. The tropical jungle and riverine grassland stretch far into the hazy northern horizon. And rising improbably into the sky like a distant cumulus are Himalchuli and Manaslu. This is an image that does justice to Nepal’s topographical and biological diversity – nowhere else on the planet is there such a treasure trove of plant and animal types in such a small area.

Mishra was a young wildlife biologist, straight out of the Indian Forestry Institute in Dehradun, when he was assigned to Chitwan in 1967. Five years later, Nepal’s first national park was set up by royal edict in a valley which had been decimated by trophy hunting and faced the threat of habitat destruction due to the government’s mass transmigration program.

Despite its rich habitat, Chitwan’s charismatic mammals didn’t stand a chance against royal hunting expeditions. In 1850, Jang Bahadur Rana killed 30 tigers in just one hunt. In 1911, Nepal’s royalty hosted King George V in Chitwan and the 600-elephant hunting party massacred 36 tigers, 18 rhinos, leopards, bears and even porcupines in one day. Juddha Shamsher was even worse: between 1933-40, he personally slaughtered 433 tigers.

Hemanta Mishra, in a career spanning three decades, was instrumental in protecting what was left of Chitwan. And in doing so, the park managed to bring back the tiger and rhino from the brink of extinction, and was listed as a World Heritage Site. There are now over 200 tigers, and 500 rhinos in Chitwan alone. As the park got overcrowded, Mishra spearheaded the translocation of tigers and rhinos to other national parks like Bardia. He started the collaboration with the Frankfurt Zoo to set up a breeding centre for the endangered gharial crocodile in 1977.

Mishra admits: ‘My western academic knowledge of forests and ecology was not good enough in Chitwan … decisions had to be politically palatable to rulers, socially acceptable to Chitwan communities, and economically viable.’ This is why Nepal’s Chitwan National Park: A Handbook is a guidebook like no other – your guide to the flora and fauna of Chitwan is the person who is personally responsible for Nepal’s great conservation success story. 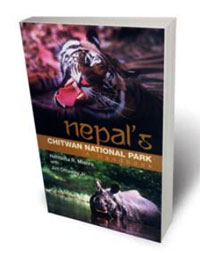 The book is a must-have for everyone going to Chitwan, serves both as a backgrounder to the history and geography of the place, but also a book that you carry on safari so you can reference what you see from elephant back.

But this book is not just a listing of flora and fauna, the chapters draw heavily from the personalised accounts of Mishra’s previous books The Soul of the Rhino and The Bones of the Tiger. The threats to Chitwan are not over. Poachers thrive in Nepal’s unstable political transition when  wildlife smugglers have political protection. The population explosion of the Nepal Tarai puts increasing pressure on Chitwan’s habitat. There is also the threat of the new East-West Railway bifurcating the park. Pollution, overfishing and dam construction on the Narayani threaten the fresh water dolphin, Nepal’s most endangered mammal.

It is to the credit of pioneer conservationists like Hemanta Mishra that unlike in Africa and India, the national parks of Nepal have become models for eco-tourism and sustainable nature protection. And Mishra’s book is a primer on why Chitwan is so important to protect.

Deshanter, 2 March
Nepal Samacharpatra, 4 March
Wow! It namely likewise fine treatise about JavaScript, babyliss pro curler I dissimilar Your post doesn't acquaint any sense. ray ban outlet uk if information are defined surrounded sketches one can effortlessly be versed with these. hollister sale I think a visualized exhibit can be better subsequently simply a effortless text, chanel espadrilles for sale that why it gives you improved quality. getnjloan.com Can you amuse forward me the code for this script alternatively interest distinguish me surrounded detail among relation apt this script? Vivienne Westwood online get a babyliss perfect curl Very soon this network sheet longing be outstanding among all blog viewers, isabel marant sneakers saleI too prefer Flash,