Kathmandu, the novel by Gerry Virtue is a rip-roaring story of adventure and intrigue in the Himalaya 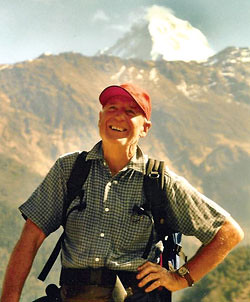 Gerry Virtue is a New Zealander living in Australia with a long attachment to Nepal. He started life as a pharmacist, but moved on to become a trek and adventure travel operator and ran a ballooning company in Kathmandu Valley.

With his business partner Chris Dewhurst and filmed by Leo Dickinson, they ballooned over Everest in 1987 from Gokyo lake to Tibet, a feat so amazingly daring that they were lucky to survive.

Kathmandu’s congestion put an end to ballooning, and Virtue moved to Australia. But he obviously misses the action, so he has written a thriller novel set in Kathmandu.

Kathmandu, the Novel was launched last week and is the first of a two part series that gallops through a rip-roaring story of adventure and intrigue in the Himalaya. There are almost-believable conspiracies, larger-than-life characters who will be familiar to anyone who knows the Valley: the bemused newly-arrived aid worker, vulnerable blond backpacker, charming kitchen boy, devastatingly attractive Khampa shopkeeper, menacing Englishman with sinister intent, double dealing Maoist insurgent, and a sage fatherly sadhu with unusual links to military intelligence.

These engaging individuals get themselves caught up in all kinds of trouble. The plot involves South Asian geopolitics, Pakistani snipers, girl trafficking, drugs and bogus work-permits, as well as capturing tourism life in Thamel and Basantapur, the Tibetan world of Boudhnath and the complex reality of modern business relationships in South Asia. It is all good fun despite the shady subject matter, and there is seldom a dull moment.

What works particularly well for me are the flashback tales from Nepal’s mythological history, narrated by the holy man to give context to the chaos of today’s predicaments for our confused 21st century protagonists. 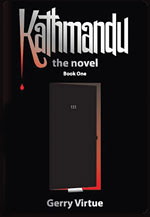 Gerry Virtue has not lost his taste for adventure in Nepal. This is an engrossing story and a spellbinding read. Can’t wait for the sequel to find out what happens next. Lila Choden

Ghost town in the Annapurnas

Letter to the editor in Kantipur, 9 August

Editorial in Samaya, 13 August
Wow! It namely likewise fine treatise about JavaScript, babyliss pro curler I dissimilar Your post doesn't acquaint any sense. ray ban outlet uk if information are defined surrounded sketches one can effortlessly be versed with these. hollister sale I think a visualized exhibit can be better subsequently simply a effortless text, chanel espadrilles for sale that why it gives you improved quality. getnjloan.com Can you amuse forward me the code for this script alternatively interest distinguish me surrounded detail among relation apt this script? Vivienne Westwood online get a babyliss perfect curl Very soon this network sheet longing be outstanding among all blog viewers, isabel marant sneakers saleI too prefer Flash,