When I think of France, two things come to mind: food and love. And luckily for the rest of us, the French love sharing their adulation of food. Goût de France, meaning ‘Good France’, returned for a second run in an evening of fine dining at The Chimney Restaurant, serving up a five-course menu celebrating classic French cuisine.

We were first served a baked cheese soufflé with Armagnac cheese fondue. Soufflé is derived from the French word souffler, which means “to breathe”, but the soufflé I was served was sunken and looked like someone had let the air out of it. Still had a lovely, light texture and what it lacked in appearance it made up for in taste. The accompanying fondue served up another hit of cheesy goodness, infused with a generous dose of French brandy. 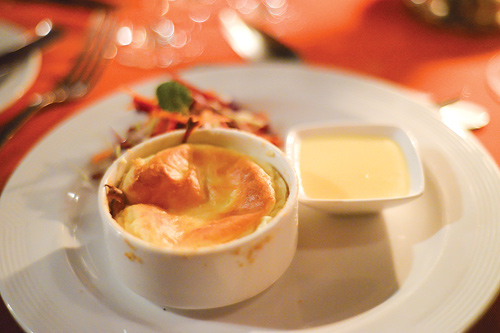 Next, we had the duck leg confit with white bean sauce on a bed of mashed potatoes and steamed vegetables. To my surprise when I cut into the duck, the skin was soft. My understanding of duck confit is a dish that is browned in the oven until the skin is crisp. Still, the meat was fall-off-the-fork tender and deliciously flavourful. The mashed potatoes and bean sauce nicely balanced out the saltiness of the duck, making for a decadent meal. 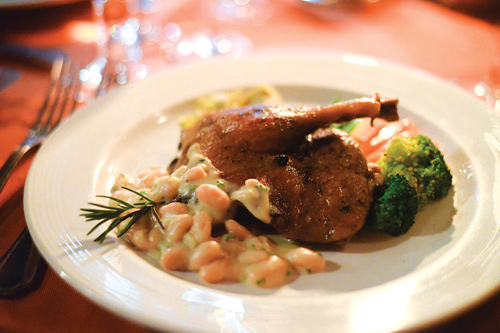 We were then served a second main of prime tenderloin with béarnaise sauce and roasted vegetables. I found the doneness of the steak a little uneven, as the innermost portion was rarer than the rest. Nevertheless, the quality of the cut was excellent and the meat well-seasoned. The herb-infused béarnaise sauce lent a fragrant touch to the steak.

Next came a platter of French and Nepali cheese, served with fig compote and assorted nuts. The sweetness of the compote balanced out the sharpness of the cheeses, and the nuts provided a good crunch. With French cheeses like Camembert and Tomme de savoie served alongside local cheeses like Belkot, Kanchan, goat, and yak cheese, it was a celebration of the love of cheese shared by the two cultures.

Then it was time for the highlight of the night. By this time, we were quite full but as the old adage goes, there is always room for dessert. Besides savory dishes, the French are known for their sweet treats like macarons and meringues, so we knew we were in good hands.

Given a choice between two desserts, I went for the dark chocolate, coconut and white chocolate truffle with strawberry coulis while my dining companion had the trio-colour cold soufflé. Mine was a towering array of chocolate sculpted into intricate decorative pieces sprinkled with desiccated coconut. With so many sweet elements in the dish, the tartness of the strawberry coulis was the perfect accompaniment to balance out the flavours. 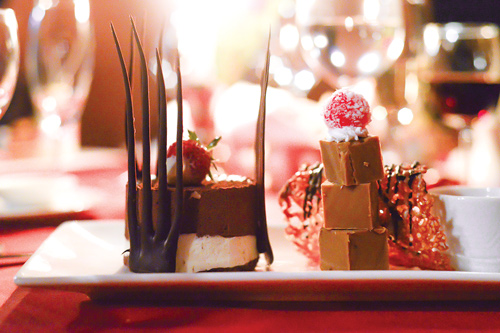 The trio-colour cold soufflé with mini opera cake, like the previous dessert, also came with an impressive chocolate sculpture. Although the dish was elegantly plated, it was a letdown in terms of flavour. The soufflé was much too heavy, with a texture more befitting of mousse instead.

Although the dinner had been a lavish treat, there were flaws in the execution of some dishes that detracted from the authenticity of the French fare. Still, it was a commendable effort, and with plans to introduce the five-course menu (Rs 5,000 plus taxes) as a mainstay at The Chimney Restaurant, perhaps they will undergo further refinement to attain the high standards of authentic French cuisine.

How to get there: The Chimney Restaurant is located inside Hotel Yak & Yeti at Darbarmarg.

"We dare the government"

"Advisers are isolating the king"

SHIVA GAUNLE
Wow! It namely likewise fine treatise about JavaScript, babyliss pro curler I dissimilar Your post doesn't acquaint any sense. ray ban outlet uk if information are defined surrounded sketches one can effortlessly be versed with these. hollister sale I think a visualized exhibit can be better subsequently simply a effortless text, chanel espadrilles for sale that why it gives you improved quality. getnjloan.com Can you amuse forward me the code for this script alternatively interest distinguish me surrounded detail among relation apt this script? Vivienne Westwood online get a babyliss perfect curl Very soon this network sheet longing be outstanding among all blog viewers, isabel marant sneakers saleI too prefer Flash,