Ten years after the conflict ended and exactly five years after they were discharged, former Maoist child soldiers are now in their 20s fighting for survival and against social stigma 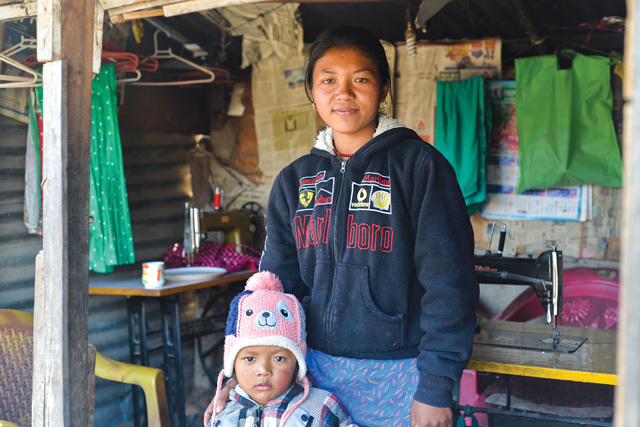 PICS: YU WEI LIEW
MAJOR PROBLEM FOR MINORS: Ex-Maoist child soldier Sukmaya Tamang is now mother of a four-year-old son. Disillusioned with the party she was ready to die for, she says she now lives only to see her son stand on his own feet.

In a shanty town behind Kathmandu Airport, by the stinking Manohara River, Sukmaya Tamang keeps a careful eye on her four-year-old son playing outside as she works on her sewing machine.

Tamang, now 24, joined the Maoist ‘People’s Liberation Army’ when she was 13 years old, studying in Grade Six of a school in Batase of Sindhupalchok. Two years later, she was part of the guerrilla force that attacked the district capital of Chautara.

“I was too small to lift a heavy machine gun, but I was still trained to fire it,” she told us, taking a break from her sewing. “I have no more dreams, the party I was ready to die for has forgotten me. The man I loved tortured me. I don’t trust anyone, I am just alive to see my son stand on his own feet.”

After leaving her abusive husband three years ago, Tamang has been working and living amidst the teeming squalour of this settlement of the landless and dispossessed as big jets roar overhead. Her neighbours are unaware of her warrior past.

Tamang was among nearly 1,000 Maoist guerrillas who in April 2006 captured Chautara District Hospital and used it to attack an adjacent army base guarding a telecom tower a day before king Gyanendera restored parliament and the conflict came to an end. A month earlier, she was nearly killed when army helicopters dropped bombs on a Maoist gathering in nearby Thokarpa.

Tamang was talked into joining the Maoist militia by senior girls of her village who were ‘whole-timers’ in the party. “They convinced me not to pursue the bourgeois education, and I was thrilled when I first got to wear combat fatigue, I thought I was fighting for the people’s liberation,” she recalled.

But four years later, after the peace accord in November 2006, Tamang was sent off to Shaktikhor, one of the seven United Nations-supervised camps for the 19,000 Maoist fighters. At the end of three years there, the guerrillas had a choice of being integrated into the national army or taking a voluntary retirement package.

Like most ex-Maoists she wanted to join the Nepal Army, but Tamang was devastated when she was disqualified because she was a minor at the time of signing of the peace accord. She was among 2,972 Maoist guerrillas let go by the UN because they were child soldiers. Another 1,036 minors were disqualified as they were recruited only after the peace deal, and just given bus fares to go home and wait to sign up for vocational training.

Five years after the UN-supervised camps were dismantled those disqualified for being ‘minors’ feel betrayed by the party and stigmatised by society. “The party dumped us,” says Pradip Karki, a former child soldier. “We cannot go home because we have the label of being ‘disqualified’ hanging around our necks.”

The former child soldiers are now in their mid-20s, and most have children of their own. The struggle to survive after the war has been more difficult than the war itself. They say they were brainwashed to abandon ‘bourgeois education’ and to join the rebel army.

Without school certificates, they now find it difficult to get decent jobs and many have paid their way to work in the Gulf and Malaysia. Some were so disillusioned, they committed suicide.

Karki, a veteran of several battles lost his closest friend in Malangwa. He says: “Our biggest mistake was to quit school. When we were discharged, it was too late to go back to studying.”

The United Nations Mission in Nepal (UNMIN) offered vocational training to discharged combatants. But many who signed up ended up learning nothing useful. A former child soldier who was trained to be a cook found no one would hire him when they found out he was a Maoist. Their ‘glorious’ party has split into five factions, and their ‘revolutionary’ leaders have now become like the politicians they once fought.

During the 1996-2006 conflict the Maoists recruited children as spies, cooks, porters and even front-line guerrillas. As young men became harder to get, the Maoists went to schools to conscript children, indoctrinate them and then destroyed the classrooms.

Although the UNMIN disqualified about 3,000 ex-combatants, the Maoist leadership delayed their release for three years so they could bargain for bigger rehabilitation packages. As a result, child soldiers were released only when they had grown into young adults. By then, their rehabilitation had become much more complex.

Khadka Bahadur Ramtel (above) was just 11 when he was abducted, sent to indoctrination camp and recruited as a whole-timer by the Maoists. He is now 25, and married to Motisara Khadka, also a child soldier. Ramtel still vividly remembers the day a group of gun-wielding rebels stormed into his school and captured all the students.

“I was in the middle of writing a test,” he recalled, “they didn’t even let me submit the paper. They took us up a mountain and we had to learn about communism.” 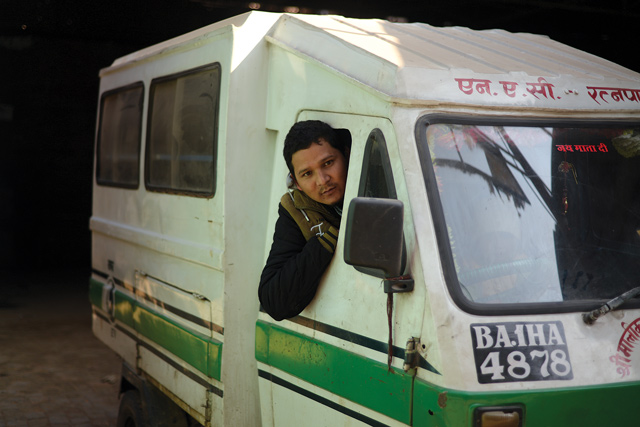 The abducted students were then allowed to meet their families one last time before being trained to kill or die. “I had no choice,” Ramtel says, “they would have harmed my family if I hadn’t gone with them.”

So, in 2001, Ramtel left his village of Maila in the remote Humla district for the life of a guerrilla. His job was to deliver confidential letters to guerrillas. As a Dalit who had experienced discrimination, what appealed to Ramtel about the Maoists is that they did not believe in untouchability.

Ramtel got the nom de guerre ‘Samrat Birahi’ after joining the Maoist militia, but he was physically too weak to use heavy guns. “I was shorter than a rifle, so I was just trained to clean, maintain and repair guns, and also to make bombs,” he recalls.

At 13, his unit was sent to Jajarkot and two years later he took part in attacks on security bases in Surkhet and Banke districts. His commander was killed during an attack on an army checkpost on the East West highway, and he was so traumatised he nearly deserted. He says: “I wanted to go home, but there was no way out of the war.”

After the ceasefire in 2006, Ramtel was sent to a UN-supervised camp in Surkhet (in photo, above) where he fell in love with Motisara. Both were disqualified from joining the Nepal Army because they were minors during the war. 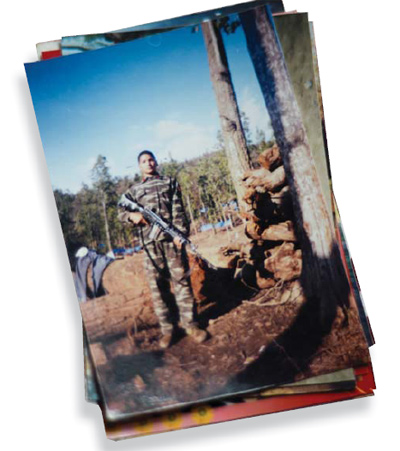 Motisara is from a ‘high’ caste and her family did not accept Ramtel as their son-in-law. Despite raising arms against it, Ramtel found caste discrimination alive and accepted in his own village. The couple moved to Kathmandu, but found that they had no money and limited education. They took up construction work for the first two years.

Ramtel now drives a three-wheeler to feed his wife and young son. “The dream I had of an egalitarian society was an illusion,” he confided, resignation in his voice, “I have just woken up to reality, and it is very cruel.” 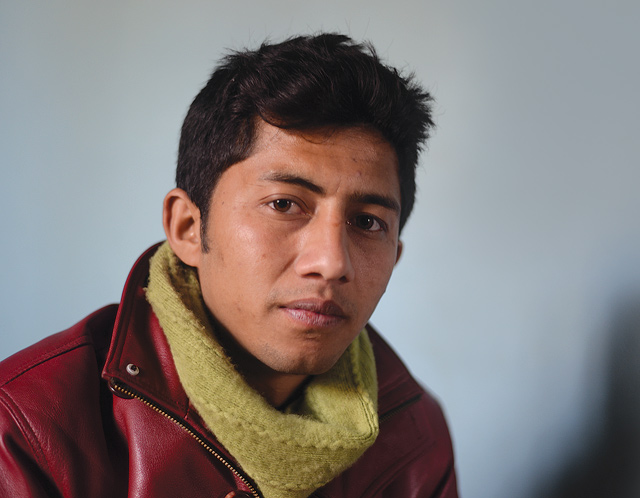 Lenin Bista, 24, is livid at the United Nations Mission in Nepal (UNMIN) that supervised the demobilisation of Maoist guerrillas for classifying former Maoist child soldiers as ‘disqualified’ and not eligible to join the national army or opt for voluntary retirement. He says the term has been humiliating and has labeled them as failures in society. "We cannot go to our villages because we are looked down upon as ‘disqualified’ people,” says Lenin, who now heads an organisation of ex-child soldiers to seek reparations. He even led a group of other ‘disqualified’ child soldiers to attack UN vehicles in Chitwan. 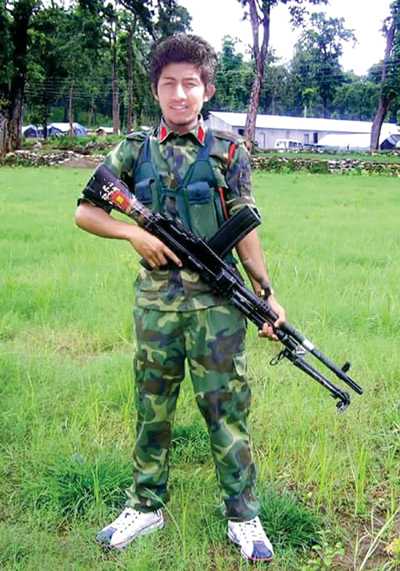 They were promised by Maoist leaders Barsaman Pun and Janardan Sharma that the party would look after them. But when nothing happened, Bista laid siege to the Maoist party headquarters. Says Bista: “They must say sorry. The party wants to forget about us, but we will not let them forget.”

"If you plan for the worst, then you do well if things get better."

The government can't be both
ASHUTOSH TIWARI

Gunaraj Luintel in Kantipur, 24 June
Wow! It namely likewise fine treatise about JavaScript, babyliss pro curler I dissimilar Your post doesn't acquaint any sense. ray ban outlet uk if information are defined surrounded sketches one can effortlessly be versed with these. hollister sale I think a visualized exhibit can be better subsequently simply a effortless text, chanel espadrilles for sale that why it gives you improved quality. getnjloan.com Can you amuse forward me the code for this script alternatively interest distinguish me surrounded detail among relation apt this script? Vivienne Westwood online get a babyliss perfect curl Very soon this network sheet longing be outstanding among all blog viewers, isabel marant sneakers saleI too prefer Flash,