Nepal’s yarsagumba season empties entire villages, schools are closed, and a large part of the trans-Himalaya resembles the wild west. It is like a gold rush as thousands trek up to pick the caterpillar fungus that fetches astronomical sums across the border in China where it is believed to have aphrodisiac properties.

And, inevitably, there is violence.

In the worst incident, seven yarsagumba pickers from Gorkha were killed by locals in Manang in 2009. Six people from the village of Nar in Manang were convicted for the murders and got life sentences. Last week, two people were killed in Dolpa after police intervened in a dispute over yarsagumba harvesting. 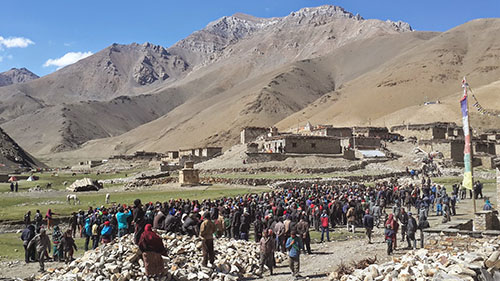 As Nepal debates setting up autonomous federal provinces in a new constitution, the violence over control of yarsagumba has thrown into sharp focus how the question of natural resources will be addressed in future. For example, how will downstream provinces share water and energy from rivers that flow down from the mountains?

"We have only been discussing about resource sharing at the central, province and local levels but how it will be done still needs to be mapped out," says lawmaker Gagan Thapa, who was member of the parliamentary committee on natural resources in the first Constituent Assembly.

Discussion over the agreed upon contents prepared by the then committee on natural resources has already begun at the CA and Thapa says we have a second chance to make it fair.

Corruption, lawlessness, political protection of organised criminals involved in the yarsagumba trade means that the situation in northwestern Nepal today is similar to opium-producing regions like the Golden Triangle or Afghanistan.

Unless new laws governing yarsagumba harvests, and sharing its benefits with local people is laid out, there will be more clashes in future experts say. " There could be even more violent disputes in future and more importantly the ecological impact caused by unsustainable harvesting of yarsa might severely impact local communities," says noted biologist Tirtha Bahadur Shrestha.

Last week’s incident in the village of Dho-Tarap of remote Dolpa seems to have been triggered by overlapping jurisdictions between lowlanders backed by the administration and police, and locals over harvesting fees in the buffer zone of the Shey Phoksundo National Park.

According to local reports, the people of Dho-Tarap demanded greater transparency over the fees collected by the buffer zone management committee. This escalated the protest which turned violent after police fired in the air to disperse the crowd. Phurwa Tsering died at a health post the morning, and Thundup Lama Dolpo died in a hospital in Kathmandu five days later on Monday after being airlifted out.

CDO Krishna Prasad Khanal admitted by phone from Dunai that police had fired in the air, but told Nepali Times: “There was a dispute over royalty collection but the fatality was not due to police firing, the person died at home.”

Locals, however, strongly contest this. They say Phurwa Tsering’s body was deliberately not sent for post-mortem and was released to his family to prevent the truth from coming out. They say the police also prepared a report saying Phurwa Tsering fell off a cliff while collecting grass.

“We don’t have grass growing in Dho-Tarap at this time of the year, it is absurd,” said Sey Namkha Dorje, chairperson of the Dolpo Concern Center (DCC).Another member of DCC, Phurwa Dhondup Gurung was also injured during the fight on Tuesday and had to go into hiding to avoid arrest. “We were there just to demand more transparency over fees by the buffer zone management committee and taking steps to protect local diversity when the fight broke out,” recalls Gurung. 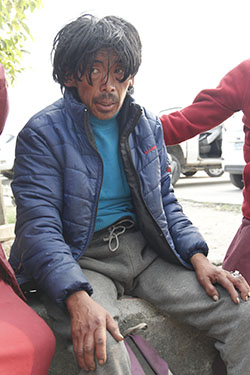 Although CDO Khanal told us last Thursday that the wounded were only lightly injured, the fact that Thundup Lama (pic, right) had to be medevaced to Kathmandu where he died proves him wrong. Lama had deep injuries in his abdomen and chest from beatings, allegedly by police.

Reports of targeted attacks on the locals and mismanagement of harvesting fee have been confirmed by Sey Namkha Dorje, chairperson of DCC, and Constituent Assembly member from Dolpa Dhan Bahadur Budha, who visited Dho-Tarap to investigate the incident.

Sey Namkha Dorje says that the violence was the worst that Dolpa had ever seen. “Not even during the war did we have such gunfire and attacks, it has left the people of Dho-Tarap deeply traumatised,” Dorje told Nepali Times after flying to Kathmandu on Sunday.

The buffer zone management committee hiked the fee for yarsa pickers this year increasing from Rs 1,100 to Rs 3,000 for people outside Dolpa, Rs 2,000 for Dolpa locals up from Rs 600 last year and Rs 1,000 from Rs 150 for locals from the VDCs within the buffer zone.

“The resource is scare here and the root cause of the dispute needs to be resolved to avoid similar violent confrontation in the future,” Dorje said, “the buffer zone committee needs to coordinate with the local community for the sustainable use and conservation of the biodiversity.”

The lesson from the Dolpa killings is that yarsagumba picking has to be regulated much more even-handedly and efficiently by the central government, taking into account the needs of local people.

Says Gagan Thapa:"This is the time to work on nuances of natural resource sharing along with setting up autonomous federal provinces.” 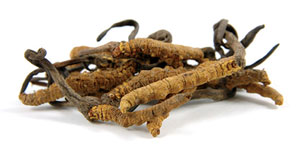 Yarsagumba is a moth caterpillar that has been mummified by a fungus. It is considered to have medicinal properties in China, and is worth its weight in gold. The demand from oriental medicine provides mountain villagers in northwestern Nepal with much-needed income.

Yarsagumba sticks out of the ground, at sparsely populated mountain areas up to 5,000m. But the desire to strike it rich draws many poor farmers from lower valleys up to the mountains during the pre-monsoon harvest season, and this often brings them into conflict with local villagers.

See video of victims of Dho-Tarap

Regardless of its outcome the only way forward for the Maoists is armed struggle.
HARI ROKKA

Any topic of interest to anyone can be freely discussed at Martin Chautari. It is the world of the word, but its members are also successful activists.
CK LAL

RAMYATA LIMBU
Wow! It namely likewise fine treatise about JavaScript, babyliss pro curler I dissimilar Your post doesn't acquaint any sense. ray ban outlet uk if information are defined surrounded sketches one can effortlessly be versed with these. hollister sale I think a visualized exhibit can be better subsequently simply a effortless text, chanel espadrilles for sale that why it gives you improved quality. getnjloan.com Can you amuse forward me the code for this script alternatively interest distinguish me surrounded detail among relation apt this script? Vivienne Westwood online get a babyliss perfect curl Very soon this network sheet longing be outstanding among all blog viewers, isabel marant sneakers saleI too prefer Flash,