Put back what you pump out 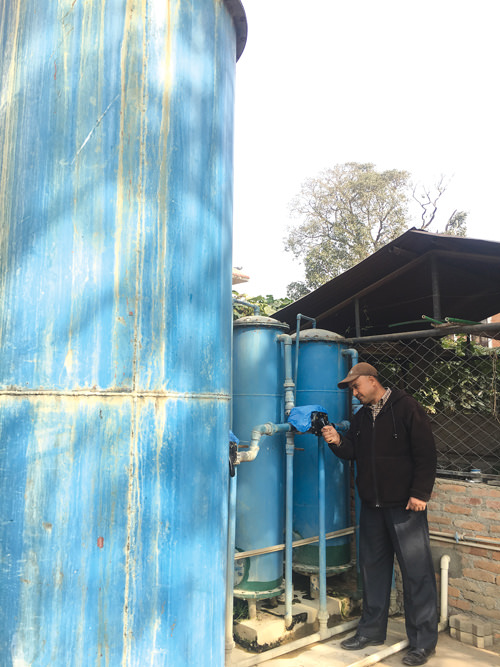 Kunda Dixit
AQUA GUARD: A technician inspects filters for a deep tubewell that pumps water up from 200m below the ground for a neighbourhood in Patan.

Every morning, Kathmandu Valley’s neighbourhoods wake up to the sound of clanging jars as people queue up for water. That is the visible manifestation of the worsening water crisis, but beneath the city there is another invisible emergency: the water table is falling at up to 1m per year because of over-extraction.

The Valley used to be a lake bed, and the only source of water here is what falls as rain and seeps underground. The soil beneath our feet is a gigantic sponge, and it is going dry because more water is being pumped out than is naturally replenished.

Kathmandu’s 3.5 million people need 360 million litres of water per day: half of that is met through groundwater extraction. This is causing the water table to fall an average of 80cm per year, exposing the Valley to dangers like sinkholes, dying forests and contamination. Users also have to drill deeper every year, and need more energy to pump the water up.

“We have been measuring the water table every month for the last 20 years, and there is no doubt it is falling sharply everywhere,” says hydro-geologist Surendra Raj Shrestha at the Ground Water Resource Development Board.

He says if groundwater depletion continues at the present rate, Kathmandu could face the kind of land subsidence seen in Bangkok and Mexico City. The remaining underground water will also have an increased concentration of ammonia, nitrates, iron and even arsenic, making it unsuitable for human consumption.

The bowl-shaped Kathmandu Valley was naturally designed for groundwater storage. Every monsoon, most of the rain falling on the hills and the Valley floor percolated down into the shallow layers, while deeper aquifers collected geological water over millions of years. Kathmandu’s hospitals, hotels and factories are now extracting this ‘fossil’ water.

The geological formation of Kathmandu means the soil on the northern and southern edges of the valley floor is most permeable. The soil under Kathmandu and Patan, where the demand for well water is highest, however, is made of clay, which does not allow water to seep down.

The problem is that the northern and southern suburbs of the Valley are getting heavily built up, and quarries and sand mining have reduced groundwater recharge. At the same time, heavier rainfall due to changes in the precipitation patterns means water cannot seep into the ground and drains off.

“We are extracting excessively from the ground, and human activity has reduced natural recharge. The solution is to replenish groundwater: it is foolish to let rainwater drain away,” explains Padma Sundar Joshi of UN Habitat. “We have to aggressively promote rainwater harvesting and the new local governments should make it mandatory for households and public buildings to recharge groundwater.”

Tyler McMahon of Smart Paani, which advises customers on water management, adds: "Recharging won't only replenish groundwater, it is also a cheaper way to manage waste water and control pollution." 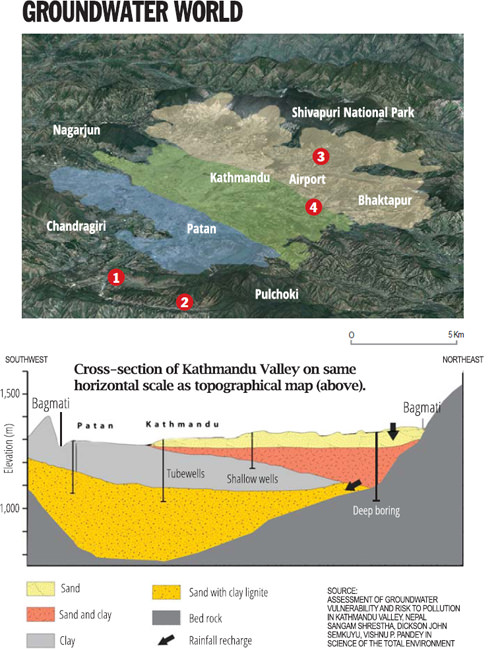 Rate at which Kathmandu's water table is falling (in metres below ground level) at sites across the Valley. The map shows high recharge zone (yellow and blue) and impermeable clay zone (green).

The most reliable study of Kathmandu’s ground water was done by Japanese aid agency JICA as far back as 1990. The Kathmandu Valley Water Supply Management Board is now updating it with a census of shallow and deep tube wells so it can fix the extraction rate and better regulate pumping. At present, institutions and service sectors with deep tube wells pay a license fee of Rs20,000 per year. But many large hotels and industries extract unlimited water free of cost.

Anuj Khanal, a hydro-geologist at the board, says the study is the first step in identifying aquifers, determining the exact extraction and recharge rates, and the proportion of groundwater that is fossil water. He adds: “It is true that groundwater is depleting in some places. But Kathmandu has a heterogeneous geology, so an observation of a place can’t be extrapolated for the entire Valley. The building code needs to take inputs from the groundwater recharge study.”

The new mayors’ offices in the Valley now have an important role in coordinating zoning laws, urban planning, road construction and groundwater regulation. For instance, construction needs to be minimised in areas of the Valley that are important for recharging aquifers and households, schools, hotels and factories need to have mandatory rain-water collection and recharge systems.

However, with the Melamchi Project coming online in 2019, complacency has set in again: many Kathmandu residents now believe that there will no longer be a water shortage, and are unwilling to invest in things like rainwater harvesting, says Anisha Karn of Smart Paani.

Hydrologists say the situation in cities like Dharan and Tansen and the Tarai towns are much worse because extraction far outstrips natural recharge.

Sajal Pradhan of water conservation group Best Paani adds it is unwise to enforce the centralised pipe-water system that has failed Nepalis. She advises prioritising rainwater harvesting for a consistent supply of water.

“Melamchi will not be enough for everyone and we will still have to collect rainwater and use the unused portion to recharge groundwater,” explained watershed expert Madhukar Upadhyay.

“Groundwater isn’t just for pumping out, it is a vital part of the Valley’s ecology. We have to maintain it so people have access to water in the coming decades.” 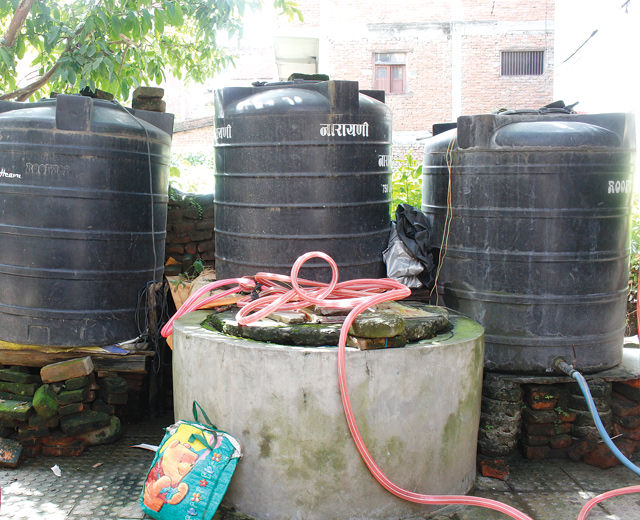 Recharging groundwater is a bit like topping up your mobile phone. There are three simple ways:

A soil test will determine the best location for a recharge pit to infiltrate rainwater into the ground. The soil should be porous enough, and the pit should have a stone base so it doesn’t overflow.

Rainwater is first trapped, settled and filtered through sand and gravel. Households or institutions can use the water, and the overflow goes into a well lined with perforated concrete rings to let the water seep slowly out from the sides.

The same pipe that used to pump up groundwater can also be used to send collected rainwater and surface runoff back underground after some basic filtration.

Just like rivers do not respect national boundaries, the Tarai’s vast groundwater aquifers span the ground beneath Nepal and India. Over-extraction by farmers in India who get subsidised diesel and electricity for irrigation pumps (below) is affecting the groundwater table in the Nepal Tarai as well. 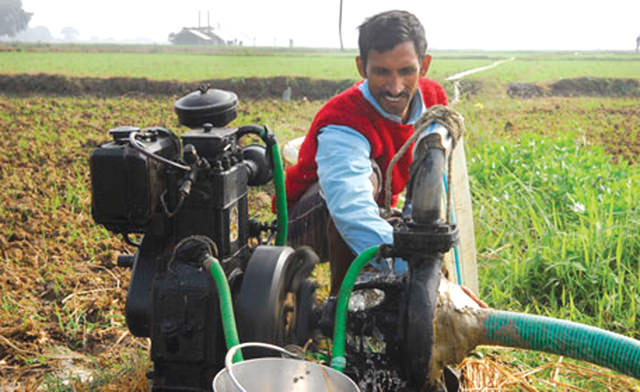 Prashant Ravi / \Down to Earth
“Groundwater depletion in the Tarai is alarming,” says watershed expert Madhukar Upadhyay. “India is drawing out so much that even our water table is falling at a much higher rate than can be replenished naturally.”

The Tarai aquifers are naturally recharged by monsoon rains every year, but deforestation and quarrying in the Tarai mean that rains do not seep into the ground but wash off into silted rivers. Surendra Shrestha of the Ground Water Resource Development Board in Kathmandu says although aquifer depletion in the Tarai is not as rampant as in the Valley, it is extensive and directly linked with mining of sand and boulders from streams and rivers. When streams go dry, there is also less recharge of ground water.

Extraction of sand and gravel (ironically for export to India) is therefore lowering the water bed in India.

Next time you buy a soft drink, remember that the water used to make it could be millions of years old, and pumped up from the deep aquifers below Kathmandu. For a mere Rs20,000 a year, many of the factories, hotels, hospitals and schools in the Valley can pump an unlimited volume of groundwater. Even the government’s KUKL water utility does it, leading to a serious depletion of Kathmandu’s aquifers.

With greater environmental awareness, several companies have started recharging ground water at their premises to make up for the water they use. Standard Chartered Bank and Shanker Hotel in Lazimpat have set an example for others by replenishing groundwater with surface runoff and harvested rainwater.

“One day I came across a particularly long queue of gagris in my neighbourhood that prompted me to Google about its implication. I was shocked to find that the water table in Kathmandu is lowering by 1m a year,” recalls Niraj Pokhrel of Standard Chartered. “It made me realise we have to replenish groundwater, not just use it.”

Working with the group Smart Paani, the multinational bank installed a rainwater harvesting system that provides 40% of its demand, and collects the surplus as well as surface runoff to recharge 2.38 million litres of water a year. “Even if it is a small contribution to Kathmandu’s water resource, it is the bank’s contribution to protect the environment,” said Pokhrel.

Next door at Shanker Hotel, Prajwol Shrestha worked with the group Best Pani to harvest rainwater. A year since the system's installation, the hotel now uses rainwater for its laundry and vehicle washing, which makes up a large part of its 60,000 litre daily consumption, and the surplus water is sent back underground.

“We are recharging groundwater as part of our corporate social responsibility, and the good thing is that our neighbours in Lazimpat are benefiting because the wells are not going dry,” said Shrestha. Tribhuvan University Hospital is installing what is probably the largest rainwater harvesting and recharging system in Kathmandu. It can replenish up to 30 million litres of water a year.

The Kathmandu Valley Water Supply Management Board wants to put a price on ground water so that it is seen as a public good. After completing its current study, it hopes to start strictly enforcing licensing of drilling pumps and to meter the water extracted.

Today about 420 institutions are licensed to extract ground water, and 250 more have applied. Depending on the area, there is a limit to the amount of water that users can extract. In safe areas like Gongabu, Dhapasi, Tokha, Kapan, Mulpani, Sundarijal and Gwakarna, users can pump 2-15 litres per second, while in Sitapaila, Naikap, Kupandole, Jwagal, Satungal, and other areas termed semi-critical, extraction is limited to 2-7 litres per second. Critical areas like Dakchinkali, Chaimale, the rest of Lalitpur and some parts of Bhaktapur limit extraction to 3 litres per second.

Not enough for everyone, Sonia Awale

Crushing tale of the Chure, Sameen Raut and Dinesh Panthi

The messenger is to blame

All eyes on Shital Niwas, Kantipur

"NA is now a Maoist army"

onlinekhabar, excerpts from Pushpa Kamal Dahal's speech, 9 June
Wow! It namely likewise fine treatise about JavaScript, babyliss pro curler I dissimilar Your post doesn't acquaint any sense. ray ban outlet uk if information are defined surrounded sketches one can effortlessly be versed with these. hollister sale I think a visualized exhibit can be better subsequently simply a effortless text, chanel espadrilles for sale that why it gives you improved quality. getnjloan.com Can you amuse forward me the code for this script alternatively interest distinguish me surrounded detail among relation apt this script? Vivienne Westwood online get a babyliss perfect curl Very soon this network sheet longing be outstanding among all blog viewers, isabel marant sneakers saleI too prefer Flash,