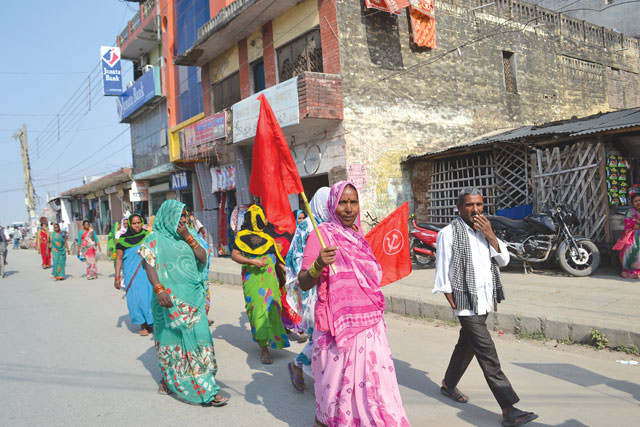 Pics: Om Astha Rai
ON THE MARCH: A rally of the Left Alliance in Bhairahawa on 26 November.

Nandini Pandey, 50, was killed by police in September 2015, days before Nepal’s new Constitution was promulgated amidst violence in the Tarai.

She was inside her own roadside house when police opened fire on protesters obstructing a supply convoy. A stray bullet hit her in the hip, and she died four days later.

Four other people in Bethari, a village 17 km east of Lumbini – including two children – were shot dead by police on the same day. Their funeral pyres were burning on the banks of the Tinau River when people were celebrating the new Constitution in Kathmandu.

Two weeks after the Bethari shooting, a government official called Nandini’s husband, Shashi Dhar Pandey, to ask if he would like to meet and share his grievances with PM Sushil Koirala, who was in Bhairahawa for a day.

“No”, he said, before angrily hanging up the phone. Two years later, even as Nepal is poised to fully implement the Constitution after successfully holding local, provincial and federal elections in 2017, Shashi Dhar is still seething with anger at politicians whose quarrel over the Constitution left his wife dead.

But he is not boycotting elections. Pandey voted in local polls in June and is casting his vote again in parliamentary and provincial elections on 7 December. “You may be angry with politicians, but you should not abstain from voting in a democracy,” he says.

Most voters share that sentiment: politicians are liars, self-centred and indifferent to people’s sufferings – but that won’t stop them from voting. They know they might not be able to change anything if they vote, but they are certain they won’t be able to improve things if they do not.

This is why over 65% of voters turned out in the first phase of parliamentary and provincial elections in 35 districts early this week, despite a series of bomb blasts and adverse weather in high mountain constituencies. Voter turnout is likely to increase in the second phase in 45 districts early next week.

More bombs have exploded since the first phase, killing a temporary policeman and injuring many candidates and their supporters. This week, when Prime Minister Sher Bahadur Deuba flew to Rupandehi to campaign, he was greeted with an explosion. All these blasts are believed to be the work of a group of Maoist dissenters who want to thwart elections, led by Netra Bikram Chand.

Even in 2013, when Nepal elected the second Constituent Assembly, many areas were rocked by blasts carried out by a larger Maoist faction led by Mohan Baidya. But voters turned out in large numbers to exercise their democratic rights, eventually forcing Baidya to rethink his strategy and take part in the polls.

“Our democracy is very strong, and electoral violence cannot weaken it,” says Naresh KC, editor of Lumbini Khabar, a biweekly newspaper in Bhairahawa. “Blasts can scare away a few voters, but they cannot sabotage elections.”

There are other threats to democracy: corrupt candidates and gullible voters. Wealthy and influential candidates can buy votes, and the money they splurge on winning elections is actually an investment for them. If they are elected, they will abuse their power to get a return on those investments.

Says Rajendra Kandel, a newly elected ward council chair in Bhairahawa: “Distributing cash and organising feasts to influence voters has become the new normal, which is the real threat to our democracy.” 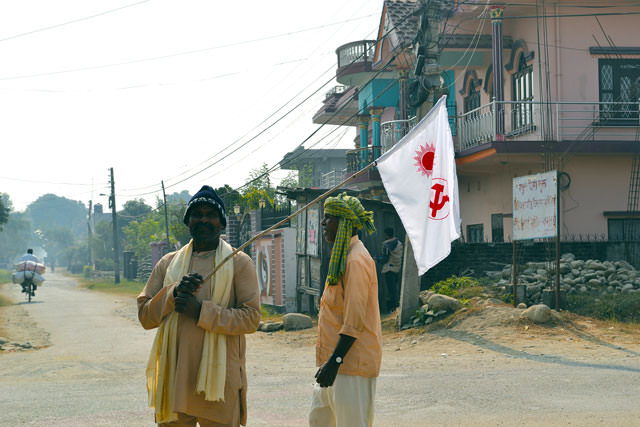 Vilified as an anti-Madhesi force, the UML seems to be aware of the price it might have to pay for this ill repute and is consciously ensuring that there are Madhesi faces in its election rallies.

The RJPN and the FSFN are not bothered about being labelled ‘Madhesi parties’, but their candidates say they have support from hill people as well. “People from not just Madhesi but also hill communities love and respect me,” says Rajesh Ranjan Barma, an RJPN provincial candidate in Rupandehi-3.

Both sides want to avoid the uncomfortable truth that the rise of parochialism during Nepal’s painful transition to a federal republic has ruffled the social fabric, and the coming together of the two communities during elections might not be enough for reconciliation.

Early this year, in a bid to persuade Madhesi parties to participate in polls, the NC-Maoist coalition proposed to divide province 5 so that western hill districts like Gulmi and Arghakhanchi would be grafted onto other hill provinces. But that proposal was rejected outright by the UML, which spearheaded a Butwal-centric campaign to foil the ruling coalition’s efforts to amend the Constitution.

As a result, the UML has won the hearts of hill people living in the plains of province 5. It did extremely well in local elections, winning not just mayor and deputy mayor but all 19 ward councils in Butwal. The NC’s Bal Krishna Khand had won both Constituent Assembly elections from Rupandehi, but he did not dare contesting elections this time. He was probably alarmed by the shock defeat of his brother Ram Krishna Khand in the mayoral race of Tilottama municipality.

The UML might have been a favourite of the hill dwellers along the highway, but it has antagonised the Madhesi community in the southern belt of province 2, as in other Tarai constituencies. A Madhesi auto rickshaw driver in Bhairahawa said: “I would rather die than voting for UML.”

Zakir Hussain, a farmer in Lumbini, says he prefers to vote for a Madhesi candidate. “If the Madhesi candidate is not promising, I will go for the NC,” he says. “The UML does not deserve our votes.”

This year's literature festival was bigger than ever, and even made space for Nepal
NEPALI KUKUR

Six pack from down under

The myth of authoritarian growth

Nepal tea company empowers women to get ahead in the tea business
JANA ASENBRENNEROVA in DHANKUTA
Wow! It namely likewise fine treatise about JavaScript, babyliss pro curler I dissimilar Your post doesn't acquaint any sense. ray ban outlet uk if information are defined surrounded sketches one can effortlessly be versed with these. hollister sale I think a visualized exhibit can be better subsequently simply a effortless text, chanel espadrilles for sale that why it gives you improved quality. getnjloan.com Can you amuse forward me the code for this script alternatively interest distinguish me surrounded detail among relation apt this script? Vivienne Westwood online get a babyliss perfect curl Very soon this network sheet longing be outstanding among all blog viewers, isabel marant sneakers saleI too prefer Flash,