Nepal is experimenting with radical decentralisation in local elections, and does not have the luxury of failing 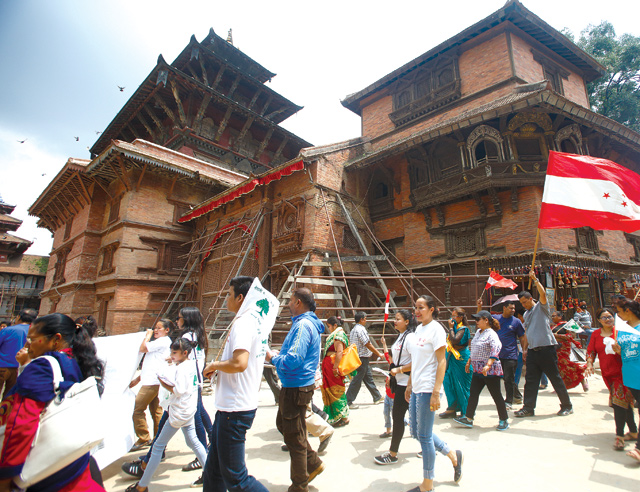 When new mayors and village council chiefs assume office after the first round of elections on 14 May, they will confront a citizenry with very high expectations of good governance and development.

These are the first elections to local councils since 1997, and people are desperately waiting for their chosen representatives to make up for two lost decades. But newly-elected ward, village and municipal council members and mayors will face multiple challenges trying to solve long-neglected problems. Voters will be impatient, and the parties may not be able to make a difference right away.

To start with, most new village and municipal councils will not even have desks and chairs. They will have to work out of what used to be VDC buildings, which will have to be converted into ward offices.

“The first round of elections is taking place where earthquake survivors are living in temporary shelters,” says Krishna Prasad Sapkota, ex-president of the Association of District Development Committees Nepal. “And in most of these villages, the newly-elected local council chiefs will also have to work out of temporary shelters.”

The 744 new municipal and village councils will have many more powers and will need at least 70 staff each, up from the present 10. The Ministry of Federal Affairs and Local Development is working to transfer former VDC and DDC staff to the new local councils, but this is not going to happen even by the time the next round of local elections are held on 14 June.

Damodar Rijal of the Association of VDC Secretaries says most councils will need more than 70 employees: “If a village council is to perform all its tasks, it needs at least 150 employees, so our new representatives will have neither proper offices nor sufficient staff to deliver services.”

The Constitution has given municipal and village councils 22 exclusive rights to draft their own laws, hear legal cases, collect taxes and issue licenses for new schools and radio stations. Former municipalities and VDCs were local administrative units, the new units will be real local governments with the powers of the executive, legislative and judiciary rolled into one.

“Greater responsibilities mean greater challenges,” says Ghanshyam Khatiwada of the National Association of VDCs. “If newly-elected representatives are not trained to understand their roles and perform their duties, they will be lost.” These logistic shortcomings, however, pale in comparison to the challenges newly-elected local bodies will face from the feudal hierarchies within their own parties, who will want to centralise decision-making.

“The political parties that are at the centre are not willing to devolve power,” says Mukti Rijal, an expert on political decentralisation. “They tried their best to prevent local elections, and will grab every opportunity to prevent real devolution.”

After the 1997 local elections, the government said it would give local bodies quasi-judicial rights to resolve property disputes. But that never happened. A high-level committee was set up to make decentralisation more effective, but it hardly met, and Rijal says the mindset of the main political parties has not changed: they are “essentially anti-decentralisation”.

When the five-year tenure of the last local bodies expired in 2002 during the Maoist conflict, the royal government did not announce another election. After 2006, the political cartel ran local councils and divided up the spoils, neglecting development.

Sunday’s elections are taking place in only 283 out of the 744 municipal and village councils in three hill-only provinces. The remaining four provinces will vote on 14 June. Madhesi parties are expected to participate in the second round.

“This is our new wave of decentralisation, and it is very radical. If we succeed, it will transform the country, and we cannot afford to fail because we have wasted so much time in experimenting with one after another form of local governance,” warns Rijal.

New municipal and village councils will have a total annual budget of Rs 400 billion – a four-fold increase from the current total budget of all local bodies. The problem is that politically-connected businesses that had benefited from the absence of elected councils over the past two decades to wrest permits for mining and quarrying are now standing for local elections so they can control local budgets.

Dor Mani Poudyal, former mayor of Hetauda and now President of the Municipality Association of Nepal, says: “We have many challenges to make decentralisation work, and the biggest is undoubtedly to elect the right representatives.”

Lack of experience and overly complicated ballot papers could mean many votes will be disqualified. The Election Commission has found voter education ‘just satisfactory’.

Says Ghanshyam Khatiwada: “It will be a learning-by-doing process, and mistakes will be made. But what is important is that we are on the right track.”

The workers of our world are united in-flight
PRASHANT JHA

Over-zealous planners would do well to accommodate businesses
CK LAL

Banks need to be savvy to research and self-development
ASHUTOSH TIWARI
Wow! It namely likewise fine treatise about JavaScript, babyliss pro curler I dissimilar Your post doesn't acquaint any sense. ray ban outlet uk if information are defined surrounded sketches one can effortlessly be versed with these. hollister sale I think a visualized exhibit can be better subsequently simply a effortless text, chanel espadrilles for sale that why it gives you improved quality. getnjloan.com Can you amuse forward me the code for this script alternatively interest distinguish me surrounded detail among relation apt this script? Vivienne Westwood online get a babyliss perfect curl Very soon this network sheet longing be outstanding among all blog viewers, isabel marant sneakers saleI too prefer Flash,