What the people think about the ‘People’s War’

Two decades on, there is mostly disappointment in the cradle of the Maoist revolution 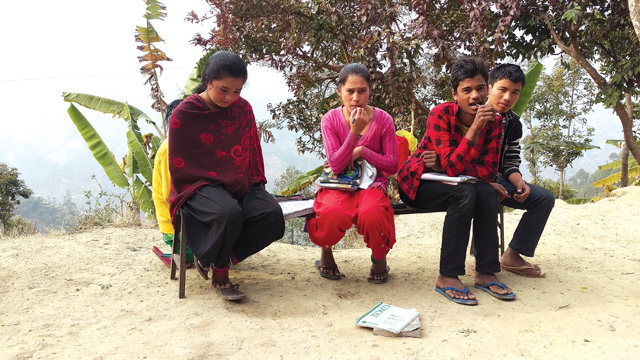 LIFE IN LIBANG: Grade 10 students of Gauri Shankar Secondary School of Thulo Namja Village in Rolpa know about the Maoists from their history books only as a political party, and not their violent past.

Grade 10 student Taman Khadka of Gauri Shankar Secondary School of Thulo Namja village was not even born when the Maoist war started near here in February 1996.

He only knows the date 13 February 1996 from memorising it for his school’s general knowledge quiz. “My parents sometimes talk about the battles, but I can’t follow their conversation,” Khadka, now 16, tells us. His classmate, Begum Gharti Magar, pipes in: “I don’t want to know about the war, I am afraid of death.”

Both are now preparing for their SLC exams, which were delayed due to the earthquake. The students don’t seem to be very curious about the conflict, and know about the Maoists from their history books only as a political party, and not their violent past.

Rolpa was the cradle of the Maoist revolution in the mid-1990s, and became their ‘base area’ for the next decade where they experimented with setting up communes, farming cooperatives and revolutionary education in some schools.

The barbed wires have long been removed from the district capital of Libang, and the bazar is bustling with activity, especially around the IME office where families come to receive cash from migrant workers in the Gulf. Remittances have now replaced agriculture as the mainstay of the economy here.

Shiva Prasad KC was a student of Maoist leader Krishna Bahadur Mahara, who introduced him to the books of Nepali communist founder Mohan Bikram Singh in school in Libang. He was arrested and tortured by the police several times. 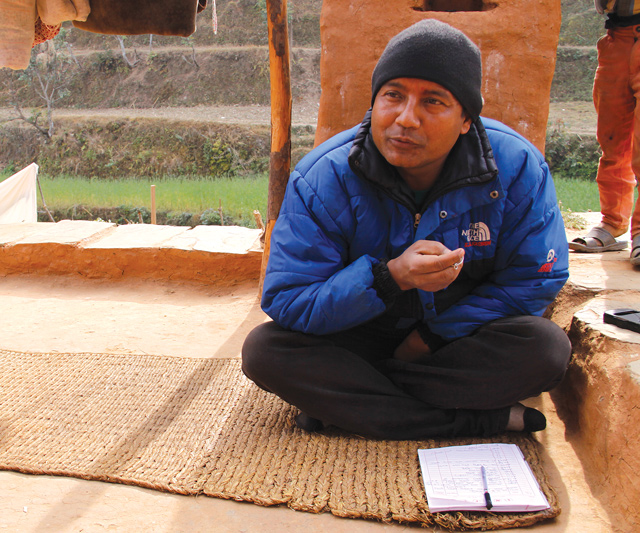 PICS: SEULKI LEE
Shiva Prasad KC was a student of Maoist leader Krishna Bahadur Mahara. He was arrested and tortured by the police several times during the war.

“They abolished the monarchy, but they failed to deliver development,” Shiva Prasad said, “ten years of armed struggle was not enough to bring about real change in society.”

The victims of Maoist violence, however, say that the use of violence was wrong and counter-productive. Gaumati Gharti Magar’s husband was a construction worker who was shot and killed a few months after the start of the conflict in August 1996. Her daughter Sarita was also injured in the incident and hasn't been able to complete her education. 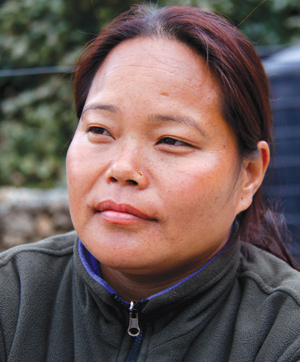 Srikumari Roka Magar's husband was killed by the Maoists few months after the start of the conflict. Her daughter also sustained injuries in the incident and couldn't complete her education.

“They killed a lot of people, but didn’t change anything in Rolpa,” Magar said in her rented room in Libang.

Some NC supporters who were targeted by the Maoists formed a resistance movement, and Srikumari Roka Magar was a member. Her father was killed by the Maoists when she was 15, and said: “The Maoist slogans for equality were good, but killing people was wrong. Their words and action didn’t match.”

The spark that lit the revolution 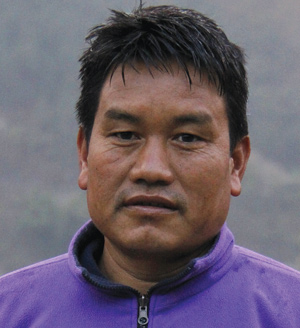 It was a cold dark night in the forest on 13 February 1996, as 35 hand-picked guerrillas gathered their gear to climb down the hill and raid the police station at Holeri of Rolpa district — launching the Maoist insurgency that would last ten years and result in the death of 17,000 Nepalis.

In the attacking Maoist unit were four women, among them Onsari Gharti Magar, now Speaker of Parliament, and Jayapuri Gharti, former minister. Also in the group was Dipendra Pun (pic, above), who was 25 at the time. “It was the first a ttack of our armed revolution, the party entrusted us with the responsibility and we were highly disciplined,” Pun recounted, “but we were so nervous we initially lost our way in the forest.”

Twenty years later, Pun is a central committee member of the UCPN-M and remembers the idealism of young guerrillas like him who were proud to be selected for the mission. They had just one rifle, 15 home-made guns and some explosives.

The attackers had camped in the forest of Gadilekh for three days before D-Day. They had been trained and selected on the basis of physical fitness and courage by Ram Bahadur Thapa (Badal) who was then Maoist chief of western Nepal and went on to become Defence Minister in the first elected Maoist government in 2008.

Dipendra Pun and the 34 attackers encircled the police station just before midnight, and reminded themselves of Prachanda’s instruction not to kill any police, just capture their weapons.

The Maoists first seized all the radios and then locked up the policemen. There was firefight, and the police soon ran out of bullets for their .303 rifles. But contrary to reports at the time, no one was killed, and they could not capture any of the rifles. 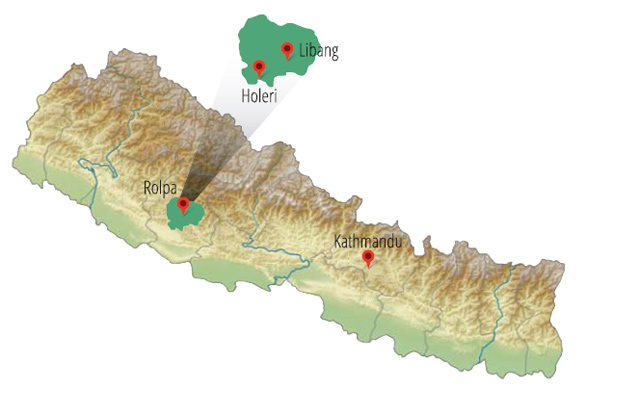 By 4AM they had retreated back to their forest camp at Gadilekh, and from there to their bases in Rolpa, Dang, and Bardia. That night the Maoists made simultaneous raids on police stations in Gorkha, Kavre, Rukum and Sindhuli. Holeri had been chosen because of its strategic location connecting Dang to the Maoist base area of Rolpa.

“At that time we were not very sure we would win the war, and we didn’t know how long would last, but we wanted to win,” Pun told us in an interview this week.

School teacher Dirgha Bahadur Khadka, 64, has nothing but horrifying memories of that first attack. His house is just 100m away from the old Holeri police post, and remembers thinking neighbours were shooting to scare away wild animals. 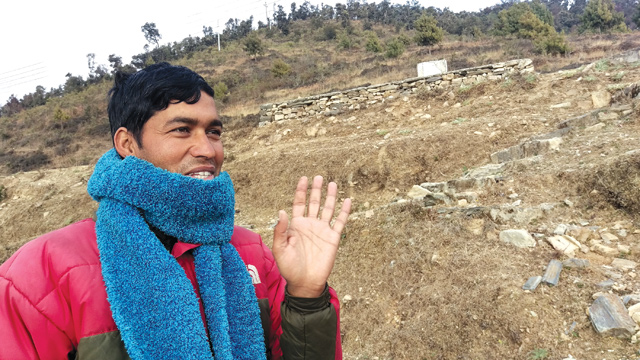 When the gunfire stopped after 20 minutes, he went out to see what was happening and saw the police station on fire. Hiding inside his house, he heard the guerrillas shouting victory slogans: “Long live the Maoist revolution.”

Throughout the next 10 years of conflict, Khadka and his neighbours fed Maoist guerrillas and gave them shelter. “Today, there is peace but we are upset and disappointed about the Maoists,” Khadka said.

Maoist activist Shiva Prasad KC of Namja village in Rolpa was 18 when he joined the Maoist party one month before the Holeri attack. He remembers being proud and happy when he heard about the attack over the radio. But KC withdrew his party membership in 2008 after feeling let down by the leadership.

Karna Batha Magar of the RPP was the elected VDC chairman of Gairigaun of Rolpa in 1996. He had been working to develop his village for three years when the conflict started, and believes the revolution set the country back.

“They didn’t allow us to go to office, they stopped all development activities and established their own government,” recalls Magar, who won the 1994 local election in Libang.

Magar now heads a community-based organisation and left politics for good, but says he is still working to lift the living standards of the people of Rolpa.  Tulsi BK was just 15 and had got married when the Holeri attack happened. But it marked the beginning of a decade-long conflict that claimed the life of her husband. He had just come back from working in India when police shot him dead for shaking the hand of a local Maoist.

BK feels abandoned, and feels the sacrifice of people like her husband have been in vain. She says ruefully: “I don’t believe anyone. All the parties are selfish and working for their own sake.”

The Holeri police station has now been rebuilt, and inspector Ramesh Panthi, 50, says the Maoists had legitimate demands, and they could have achieved them peacefully. “There was no need to kill so many people,” said Panthi, “the real reason for the revolution was the lack of education and jobs.”

An ex-MP shows us how to turn water into gold.
KUNDA DIXIT

Unlikely as it may seem, theres been some well-informed debate about Nepal on American airwaves.
DANIEL LAK

"The only way to survive in business is by being ethical."

Why the suspension of the Singapore Airlines flights isnt surprising.
ARTHA BEED
Wow! It namely likewise fine treatise about JavaScript, babyliss pro curler I dissimilar Your post doesn't acquaint any sense. ray ban outlet uk if information are defined surrounded sketches one can effortlessly be versed with these. hollister sale I think a visualized exhibit can be better subsequently simply a effortless text, chanel espadrilles for sale that why it gives you improved quality. getnjloan.com Can you amuse forward me the code for this script alternatively interest distinguish me surrounded detail among relation apt this script? Vivienne Westwood online get a babyliss perfect curl Very soon this network sheet longing be outstanding among all blog viewers, isabel marant sneakers saleI too prefer Flash,