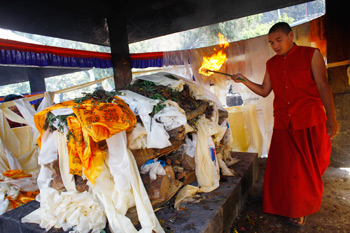 Since the first fatality in the spring of 1922, Mt Everest has claimed the lives of 104 Nepalis. The majority of them are fathers, sons, brothers and sisters from Solu Khumbu.

Historically, western mountaineers were elite climbers: mostly well trained, acclimatised and proficient. They worked out the route, climbed and fixed the ropes, the ladders and established camps, and then they secured the passage of the Nepali ‘staff’ who carried the equipment.

From about 1990, there was a transformation as western and Nepali agents created ‘Instant Everest’ -- offering the summit as a product, to anyone who can pay. Today, it is the Nepali staff of high altitude workers who establish the routes, take the risks, and create a ‘rope and ladder road’ from Base Camp to Summit. ‘Climbers’ don’t even need ice axes to get to the top.

The once noble sport of mountaineering has been turned into a commercial circus of performing clowns. Inexperienced, incompetent and often unfit individuals pay vast sums to western and Nepali ‘expedition agents’, so they may ‘conquer’ the world’s highest mountain.

6. Pressured to climb in dangerous weather

7. Lacking English skills which can be fatal, eg: K2 tragedy

The high altitude workers have to ensure all camps/oxygen depots are in place for the ‘weather window’ for the clients’ summit push. The ‘bonus carry’ and ‘bonus summit’ payment system increase the pressure on them.

While the Nepali high altitude worker is making a route up the Khumbu Icefall the clients are meeting in a 5-Star hotel in Kathmandu, flying to Lukla and strolling up to Base Camp where they are housed in individual and spacious tents with air mattresses where they acclimatise (read: upload pictures to websites and attend to Facebook fans). They have instant helicopter evacuation and a specialised aid post on call. The dining tent has cafe-latte machines and full restaurant facilities. Performance enhancing drugs (not acceptable in other sports) are used.

Many members of commercial expeditions have never met before, have no idea of their experience and cannot work as a team. Many are inexperienced and the Nepali guide is often put in a difficult and dangerous situation to get this client up, and then down. 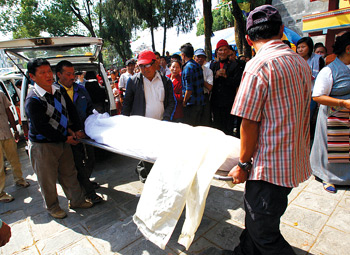 PICS: NIRANJAN SHRESTHA
When the ropes and camps are established the clients move from the safety and luxury of EBC via a series of pre-set camps, where Nepali staff cook meals, melt snow for water and carry their equipment. There is usually a designated ‘guide’ to push them up the ropes. Then there is a newly developed oxygen mask that gives an oxygen level in the blood of 70 per cent: similar to that most people have at 6000 m.

The Nepali high altitude worker works hard, suffers and is paid poorly, and as we have seen, he dies. The clients return home as heroes to write articles, books, appear on tv, hold lectures, receive sponsorships and even become experts on Himalayan mountaineering.

This week, the government formed a joint task force, led by the chief of the Mountaineering Department.  It is made up of representatives from the Nepal Mountaineering Association, Trekking Agency Association of Nepal and Expedition Operators’ Association -- the very organisations who have fostered and allowed the present crisis.

The solutions are clear: better work conditions for the Nepali staff (wages, training, certification, etc), higher peak fees to reduce crowding, reducing the number of expeditions and climbers allowed on the mountain, and required pre-expedition experience of clients.

Lets return the adventure of mountaineering to Mt Everest, and put it in the hands of new, knowledeable minds with less economic interest in the decision-making process.

David Durkan is a Welsh mountaineer living in Norway and former Contributing Editor to Mountain Magazine.

Yak Attack unearths musical synapses between Nepali folk and rest of the world
RABI THAPA
Wow! It namely likewise fine treatise about JavaScript, babyliss pro curler I dissimilar Your post doesn't acquaint any sense. ray ban outlet uk if information are defined surrounded sketches one can effortlessly be versed with these. hollister sale I think a visualized exhibit can be better subsequently simply a effortless text, chanel espadrilles for sale that why it gives you improved quality. getnjloan.com Can you amuse forward me the code for this script alternatively interest distinguish me surrounded detail among relation apt this script? Vivienne Westwood online get a babyliss perfect curl Very soon this network sheet longing be outstanding among all blog viewers, isabel marant sneakers saleI too prefer Flash,