As things stand, the left alliance has an edge over the democratic grouping. But it is far from certain if these blocs will survive intra-party and intra-alliances rifts before polls 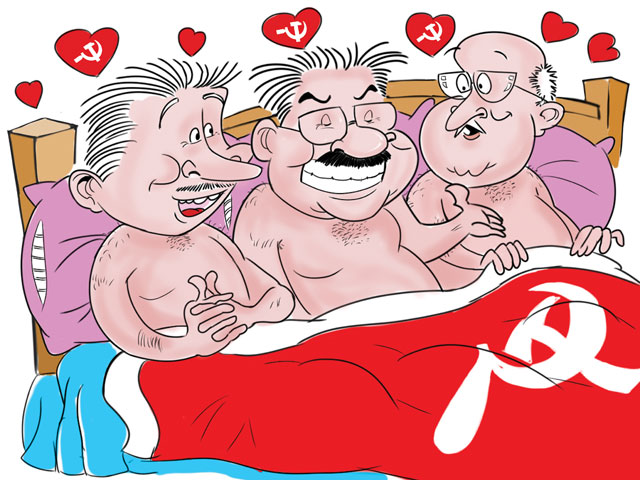 Who would have thought that Nepal’s two largest communist parties, poles apart ideologically and sniping constantly, would unite? Especially when one of them was still in bed with a third party.

But they did. The announced move towards unification of the UML and Maoists was such a tectonic shift in Nepali politics that it is still causing aftershocks, with the NC trying to cobble together an anti-left coalition including not just Madhesi parties but also rightists, royalists and pro-Hindu parties.

Analyst Narendra Jung Peter says the marriage of the UML and Maoists is so weak it is bound to end in divorce. “They made a mistake in haste, and will repent at leisure,” he quips. All these years, the UML denounced the insurgency by the Maoists, who in turn belittled the UML’s philosophy of ‘People’s Multi-Party Democracy’.

Of late, Maoist leader Pushpa Kamal Dahal had been accusing UML Chair KP Oli of being ‘casteist’ and working against Madhesi, Janajati and other marginalised people. For his part, Oli has often slammed Dahal for breaking their alliance at India’s behest.

When they decided to unite, therefore, the cadres of both parties were left utterly confused. “Did Dahal admit that the Maoist war, as argued by the UML, was a crime? Did Oli admit that he, as accused by Maoists, only serves the interests of the hill elite?” Peter asked rhetorically.

This week, Nepali politics birthed even stranger bedfellows. Fringe communist parties of the pro-Soviet school, condemned by Nepal’s mainstream communists for supporting King Mahendra’s coup in 1961 and vilified ever since, joined the Maoists, once acolytes of China’s Mao Zedong.

All this political promiscuity is the result of a phobia about losing in the November-December elections. But the bed shared by former foes is not so comfortable.

Baburam Bhattarai of the New Force threatened to quit if he does not get the Gorkha constituency and 15% of seats for his cadres. The Maoists will not settle for anything less than 40%, making it harder for Oli to address demands of his own candidates.

The story is the same in the anti-left alliance, with Madhesis and the RPPs claiming more than they deserve. The NC cannot give them what they want, but cannot ignore them, either. As things stand, the left alliance has an edge over the democratic grouping. But it is far from certain if these blocs will survive intra-party and intra-alliances rifts before polls.

From Asan to Angkor

Maoist ideologue from Baburam Bhattarai writing under his alias in Janadharana, 16 December
Wow! It namely likewise fine treatise about JavaScript, babyliss pro curler I dissimilar Your post doesn't acquaint any sense. ray ban outlet uk if information are defined surrounded sketches one can effortlessly be versed with these. hollister sale I think a visualized exhibit can be better subsequently simply a effortless text, chanel espadrilles for sale that why it gives you improved quality. getnjloan.com Can you amuse forward me the code for this script alternatively interest distinguish me surrounded detail among relation apt this script? Vivienne Westwood online get a babyliss perfect curl Very soon this network sheet longing be outstanding among all blog viewers, isabel marant sneakers saleI too prefer Flash,