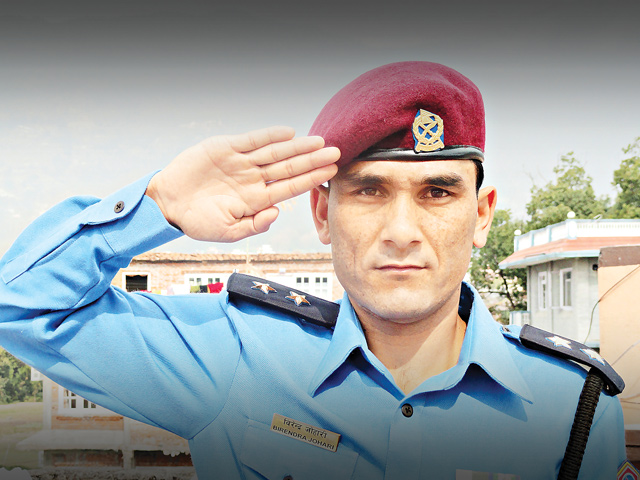 Growing up in a village in Darchula in remote northwestern Nepal, Birendra Singh Johari would often impersonate local policemen. He admired their crisp blue uniforms and knew that he wanted to be a policeman who he grew up.

That dream came true in 2001 when Johari joined in the Nepal Police as an assistant sub-inspector. Four years later, he was promoted to sub-inspector.

“It was a big day for me and my family,” says Johari whose family migrated to Nepal in the late 1950s from India. “I had always dreamt about serving my country.”

In the latter part of his career Johari has been involved with the Crime Investigation Bureau of the Nepal Police and heads the Mahakali Regional Investigation Team which is involved in tracking smuggling operations across India-Nepal border.

Johari’s contribution to wildlife conservation earned him the WWF Abraham Conservation Award this year. He told us after the award ceremony this week: “Wildlife contraband is a transnational crime. It may have decreased in Nepal, but it continues in India, and that affects us in Nepal as well.”

During his tenure in Central Investigation Bureau (CIB) of Nepal Police, Johari led 12 anti-poaching operations which led to the arrest of 30 poachers. Wildlife parts including five sets of leopard skin and 4.8kg of tiger bones, six sets of red panda skin and two rhino horns were also confiscated.

Most recently Johari and his team foiled smuggling operations in Kanchanpur and Baitadi where, acting on a tip-off his team hauled wildlife parts and nabbed smugglers entering Nepal with endangered animal parts.

“Working to catch criminals who operate crossborder is not easy. There is a whole nexus with people operating in different layers,” he explains. “People living near the Nepal-India border are the ones involved in poaching and smuggling. Then there are the middlemen and finally there are those with contacts in China. Sometimes even when you catch one person, the chain is still functioning.”

Johari knows his job has risks, and receives frequent threats from smugglers warning of harm to him and his family. The trick of his trade, says Johari, is earning the trust of those involved, which is why he usually changes his profile to fit in. He has spent months under cover with poachers and traders at the India-Nepal border learning how the chain functions.

“There have been more than one operation when the traders were armed,” says Johari about the trips he has made to Indian nature reserves where the animals are poached. His sincerity and hard work has earned him recognition in circles working to curb wildlife crimes. He has been felicitated with various awards from the District Forest Office in Kanchanpur and Nepal Police.

Johari believes that Nepal can become a true success story in wildlife crimes if everyone works together: “Most animals are killed in India and Nepal is used as a transit route to get them to China. Officials in the two countries need to work together to solve this crime.”

"You need political will to save wildlife"

Two banks are sinking. How soon will they go under?
NEPALI TIMES INVESTIGATION
Wow! It namely likewise fine treatise about JavaScript, babyliss pro curler I dissimilar Your post doesn't acquaint any sense. ray ban outlet uk if information are defined surrounded sketches one can effortlessly be versed with these. hollister sale I think a visualized exhibit can be better subsequently simply a effortless text, chanel espadrilles for sale that why it gives you improved quality. getnjloan.com Can you amuse forward me the code for this script alternatively interest distinguish me surrounded detail among relation apt this script? Vivienne Westwood online get a babyliss perfect curl Very soon this network sheet longing be outstanding among all blog viewers, isabel marant sneakers saleI too prefer Flash,