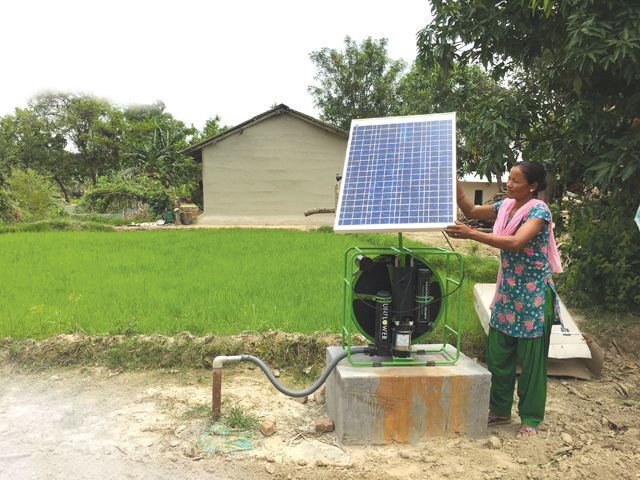 Pics: Shreejana Shrestha
SUNNY FUTURE: Hira Chaudhari and Astuni Chaudhari (below) in Fulbari village of Kailali harnessed solar power to pump water, irrigate their fields and lift their families out of poverty.

When they used to run out of money, Hira Chaudhari and her husband would cross the border into India in search of work. They don’t have to anymore.

The family now grows surplus food thanks to a solar-powered irrigation pump that has freed them from dependence on the annual monsoon. They can eat vegetables that they grow year round, sell the rest to pay school fees for their children, and even have savings left over. 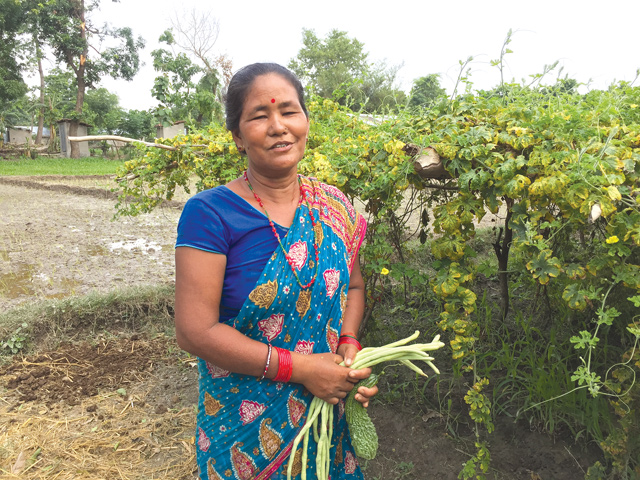 Hira used to be a kamalari, but being freed from bonded labour did not free her from poverty. She used to earn just Rs20 a day in India. Today, her family makes Rs80,000 annually from the farm.

It has all been possible because of support from the Poverty Alleviation Fund (PAF) for photovoltaic panels rigged to a water pump to irrigate their fields. The whole system costs Rs70,344 and is supported by PAF’s small scale infrastructure program.

“The solar pump allows me to grow vegetables and crops thrice in a year, our income has risen and we no longer have to go to India,” says Hira who hated leaving the children behind.   Astuni Chaudari is also doing much better after she was able to irrigate her vegetable farm with water from a solar pump.

She has leased more land to grow chillies, seasonal beans and bitter gourd. “It was risky to depend on rainfall, and we had to go to India to work when the money ran out,” says Astuni, who now earns Rs70,000 a year from the farm.

Hira and Astuni are among 45 of the poorest households in Kheda village of Dhangadi Sub-Metropolitan City near the Indian border who grow surplus food to sell in the market at Dhangadi. And the solution was a simple water pump running on free sunlight. 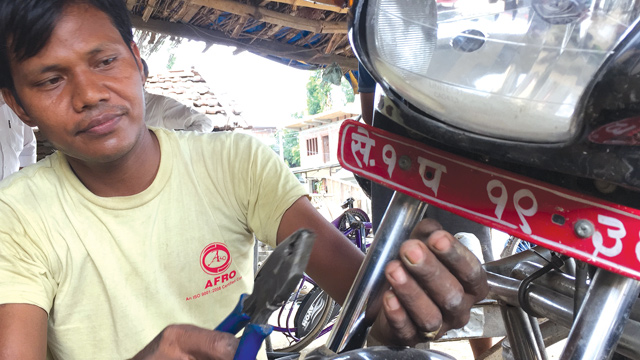 “Kailali’s subsistence farmers no longer have to wait for rainfall to grow crops, they grow enough to feed themselves and have savings,” says Nahakul KC of the PAF.

Kailali has one of the highest out-migration rates among Tarai districts, and the lack of young men has reduced agricultural production. The PAF’s solar pumps have returned many to the land: instead of earning cash in India, they are growing food at home.

Agriculture and food security expert Yamuna Ghale explains: “The solution to food deficit and lack of jobs is irrigation. It’s as simple as that.”

When the government banned the bonded labour system known as kamaiya in 2010, Man Bahadur Dangora (pictured, above) started a bicycle repair business. Today, he is a sought-after motorcycle mechanic in Suklapanta municipality of Kanchanpur, and an inspiration in his community.

“There was a time when I worked as a slave, today I am my own master,” says the 33-year old, who took a Rs15,000 soft loan through the PAF to start his motorcycle repair and spare parts shop. The PAF has supported more than 32,000 community-based organisations in 58 districts with a Rs15 billion revolving fund. It assists 146 such organisations in Kanchanpur, mostly targeted to former kamaiyas.

It wasn’t easy at first. There was never enough money saved up to expand the business, but the PAF revolving fund gave him the break he’d been looking for. He now earns enough to educate his two sisters and send his son to an English school. He tells us: “Who would have thought a kamaiya’s children would ever go to school?”

No government, no irrigation

And again, political differences are forcing us to settle for a partial budget
PAAVAN MATHEMA

Having climbed the highest peaks in Asia, Australia and Europe, the Nepali women mountaineers have four more to conquer
CANDICE NEO
Wow! It namely likewise fine treatise about JavaScript, babyliss pro curler I dissimilar Your post doesn't acquaint any sense. ray ban outlet uk if information are defined surrounded sketches one can effortlessly be versed with these. hollister sale I think a visualized exhibit can be better subsequently simply a effortless text, chanel espadrilles for sale that why it gives you improved quality. getnjloan.com Can you amuse forward me the code for this script alternatively interest distinguish me surrounded detail among relation apt this script? Vivienne Westwood online get a babyliss perfect curl Very soon this network sheet longing be outstanding among all blog viewers, isabel marant sneakers saleI too prefer Flash,