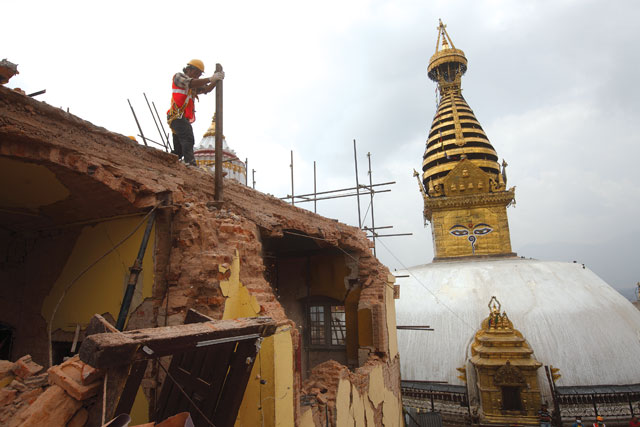 Among the heritage sites that were damaged in the 25 April earthquake is Swayambhu, the temple on a hill overlooking the city where Manjushree is supposed to have seen a lotus bloom on the lake that was once Kathmandu Valley.

Since then, Swayambhu has been a shrine for Buddhists and Hindus alike and holds great cultural and religious significance to the people of Kathmandu. However, the M7.8 earthquake badly damaged the stupa, chaityas and some of the stone sculptures of gods and goddesses.

French archaeologist and art historian, David Andolfatto (pic, left), who is a UNESCO consultant assessing the damage to Kathmandu’s cultural heritage says up to 70 per cent of Swayambhu may have to be rebuilt. Andolfatto is working with Swayambhu’s head priest, Amrit Man Buddhacharya, to make a painstaking inventory of every tiny artefact that was in the destroyed monuments.

“The priority now is to protect the damaged monuments before the monsoon,” said Andolfatto, who has had to deal with culture, and sometimes even politics. For example, the tantric Shantipur Mandir and the two paintings inside need to be restored, but only two priests are allowed to enter it.

The restoration also has to decide how to seal cracks in the main stupa. Precautions must be taken with the material used as it might leak on the sculptures inside.

Since the beginning of the assessment in Swayambhu, UNESCO has got help from locals and foreigners. Andolfatto is willing to train more volunteers, but he wants committed people.

Helpers are also needed to set up temporary shelters for the community living around the stupa. Buddhacharya, whose ancestors have been living in Swayambhu for 1600 years, regrets the concern is only about the stupa. “There are 195 people living here, and 27 houses have collapsed, who is going to rebuild those?” he asks.

The 30 families are now living in tents around the stupa from where they still conduct the daily religious rituals. “These people are intangible heritage that keeps the tangible heritage alive,” says Andolfatto, who estimates that it may take seven years to restore sites like Swayambhu. He would like to see Kathmandu shun concrete and rediscover its brick and tile architectural heritage.

Several cultural sites in Kathmandu Valley damaged during the earthquake are currently being assessed by the Department of Archaeology. Most of them are closed but a few have been opened to the public.

Boudhanath, Budanilkantha and Pashupatinath are some of the sites declared safe by the Department of Archaeology. The Tourism Recovery Committee said more heritage sites in Kathmandu Valley will open in the coming weeks. Bhesh Dahal, director general of Archaeology Department gave his approval for the opening of Kathmandu Darbar Square, Swayambhunath and Patan Darbar Square on 15 June.

Suresh Man Shrestha, Secretary of Ministry of Culture, Tourism and Civil Aviation said it was crucial to organise fam trips for celebrities, tour operators and travel writers to Nepal. Such initiatives would enable a better view of Nepal’s touristic potentials after 25 April.

TEXT & PHOTOS by DAMBAR KRISHNA SHRESTHA
Wow! It namely likewise fine treatise about JavaScript, babyliss pro curler I dissimilar Your post doesn't acquaint any sense. ray ban outlet uk if information are defined surrounded sketches one can effortlessly be versed with these. hollister sale I think a visualized exhibit can be better subsequently simply a effortless text, chanel espadrilles for sale that why it gives you improved quality. getnjloan.com Can you amuse forward me the code for this script alternatively interest distinguish me surrounded detail among relation apt this script? Vivienne Westwood online get a babyliss perfect curl Very soon this network sheet longing be outstanding among all blog viewers, isabel marant sneakers saleI too prefer Flash,