When the ground started shaking with a mighty roar at 11:56 on Saturday, 25 April 2015 there were local people and tourists milling around the Patan Darbar Square. Three of the main temples came down in a cloud of dust, and the granite pillar holding up the brass statue of King Yognarendra Malla and his two wives started swaying.

The statue came tumbling down, with the queens and the serpent scattered in the debris. Within hours, even before some of those trapped underneath the rubble had been rescued, conservationists and neighbourhood people had started salvaging the temple artifacts and carried it into the courtyard of the Patan Museum for safekeeping. Among the statues rescued was the Yognarendra figure, and even the tiny metal bird sitting on top of the serpent was found underneath the bricks and dust. 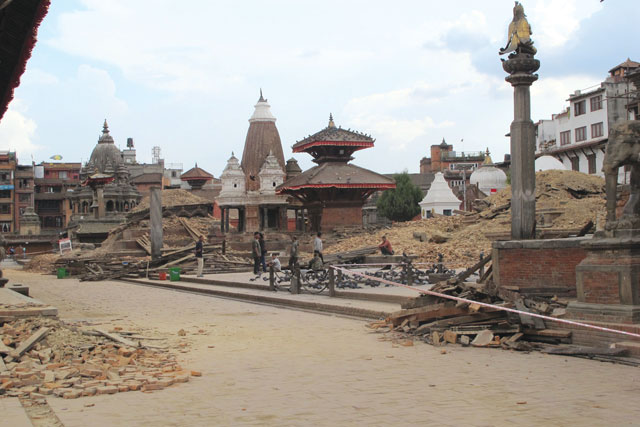 Kunda Dixit
ROYAL RESCUE: A week after the earthquake in April 2015, the column where King Yognarendra Malla’s statue used to be in Patan Darbar Square.

Fast-forward nearly two years later, and the shiny golden statue restored to its original splendour was reinstated on top of the pillar. On hand to witness the installation was Austrian heritage conservationist Martina Haselberger and her team from the Institut fùr Konservierung in Vienna who had been working for nearly two months to repair the statue.

“We worked out of many original photographs of the statue and we could repair the damage as accurately as possible,” said Haselberger whose team worked closely with Patan’s coppersmiths. Parts of the fire-gilded surface of the statue was damaged and was repaired with gold leaf and epoxy resin used to close small fissures and diluted citric acid for cleaning.

“Everything was smooth. The only problems we had were the adjustments us Austrians had to make regarding the weather and cuisine in Kathmandu,” Haselberger told Nepali Times. 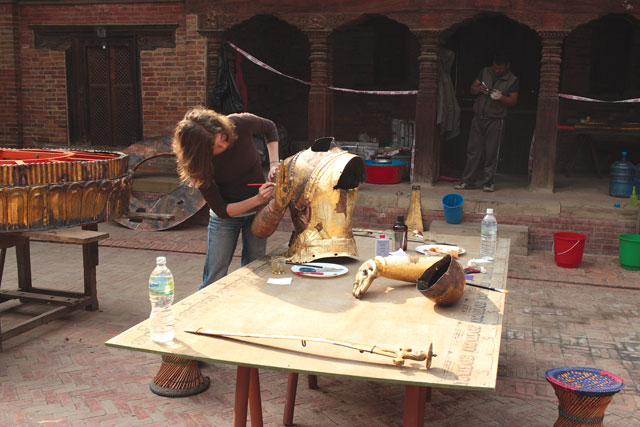 The Institute has been involved in the restoration of the Patan Museum and the Bhandarkhal Garden since 2010, as part of an Austrian government effort to preserve Kathmandu Valley’s cultural assets. The history of Austrian involvement in Nepal goes back to the Capuchin monks from Tyrol who set up a base in the Valley in the 17th century, and even gifted King Pratap Malla with a telescope.

In 2010, Sekler asked his colleagues in Vienna for help with restoration in Patan and the team has come to Nepal once a year to restore and maintain cultural artifacts. When the earthquake destroyed many of the monuments head of the Institute, Gabriela Krist, got help from the Austrian Development Agency for rebuilding. 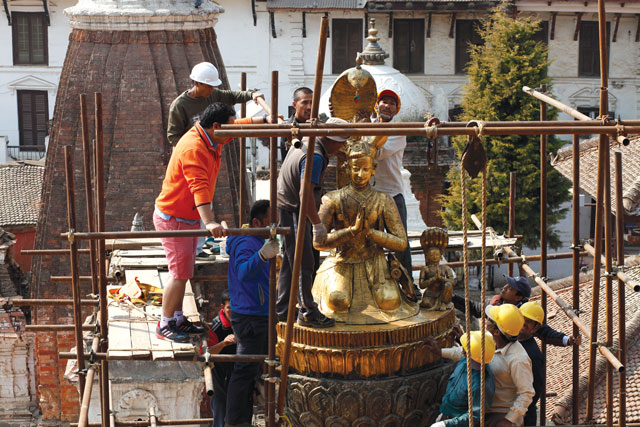 Gopen rai
The column after the king’s brass figure was reinstalled.

Haselberger says the preservation work has been more urgent and important after the earthquake to restore the ancient monuments and save them from further decay and theft. The column holding up the Yognarendra statute has been carefully reinforced so it is safer in another earthquake.

Rohit Ranjitkar, Director of KVPT, is appreciative of the help from the Austrians. “The institute has always been reliable and is known to be fast and efficient,” Ranjitkar told Nepali Times. The feeling seems to be mutual, since Haselberger praised the cooperation: “With KVPT we have an excellent partner that is focused on solving problems.”

The Austrian team from the Institute for Conservation is returning in August to continue the restoration of the stone foundation of the Hari Shankar temple that was destroyed in the earthquake.

Fit for a king, Lawrence Miller

An interview with Bishwo Nath Upadhaya, president of the 1991 constitution drafting commission.
In Sanghu, 19 May

Rajendra Manandhar in Kantipur, 16 May

Kiran Nepal in Himal Khabarpatrika, 15-29 May