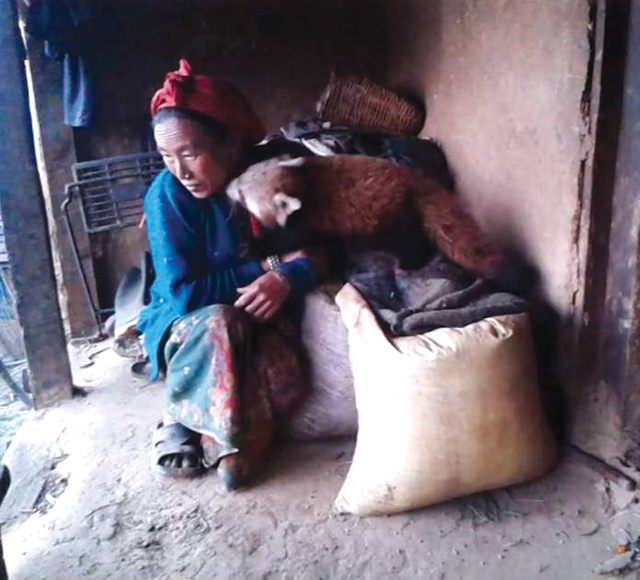 LIKE PETS: Lahari Budhamagar with one of the red panda cubs at her home in Rolpa. The pandas were named Kalu and Kali and grew up on goat milk.

Lahari Budhamagar burst into tears last week when she arrived at the Kathmandu Zoo to hand over a pair of red panda cubs that she had rescued and raised for five months in her home in Gam of remote Rolpa district. They had become like pets, and were hard to let go.

Last August, her husband, Man Bahadur, was foraging for wild mushrooms in the forest when he heard an unusual chirping sound. He found the brown and white newborns lying helpless in the undergrowth, malnourished and motherless. 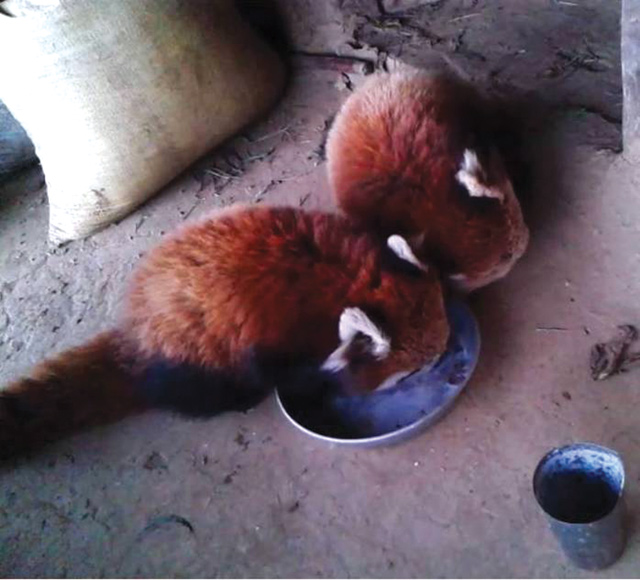 Man Bahadur, 59, took the feeble creatures home thinking they were fox cubs and tried to feed them meat, but they threw up. Then he and his wife tried feeding them goat milk, which they seemed to like.

It was only after he noticed the cubs had green scat that he realised that they were pandas, and started feeding them bamboo shoots. Red panda are not related to China’s giant panda, and actually belong to the ailuridae family and live in canopies of mountain forests in central and eastern Nepal. 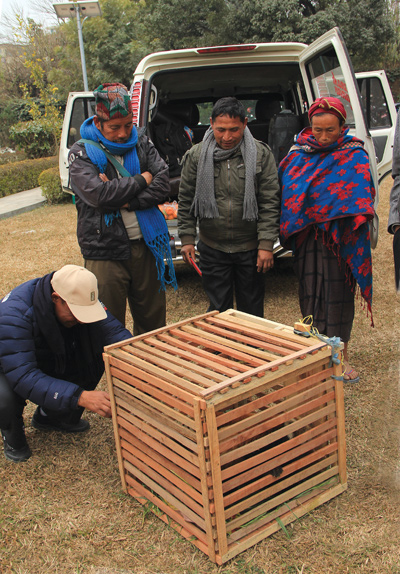 The Budhamagar couple (above) rescued and raised Kalu and Kali for three months before handing them over to the Central Zoo last week (right). 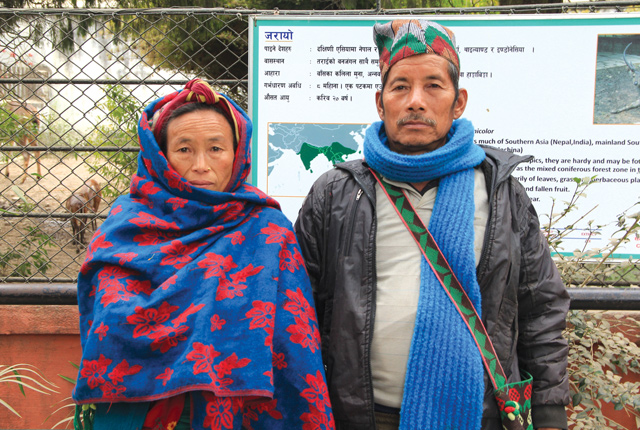 The cubs were named Kalu and Kali. As time wore on and the baby pandas grew larger, the Budhamagars felt it was no longer prudent to keep them at home, even though they were healthy and active and their attachment to the pandas had grown strong.

However, red panda expert Angela Glaston isn’t optimistic about the pandas being able to thrive in the zoo. “I would be more inclined to leave them in the mountains and let them gradually get used to survival in the wild,” she said.

Even so, Kalu and Kali seem to be doing well at the zoo and have made friends with another panda from Ramechhap, named Gauri, which was rescued in 2013.

With the increasing frequency of live trapping of wild animals like pandas, bears and leopards in Nepal, there is a mounting need for government-sponsored wildlife rehabilitation centres that can properly relocate animals back into the wild.

A survey in 2013 in Rolpa revealed that 98 per cent of the population were unaware of the existence of the red panda and 100 percent were unfamiliar with the value of conservation efforts or legal status of the species.

Budhamagar, now an empty nester, hopes to meet politicians while in Kathmandu to tell them about the need to have a rehabilitation centre for rescued wild animals.

Sonam Tashi Lama is with the Red Panda Network.

Ladies and Gentlemen, the Beetles

If a Nepali man can brag about his prostitution, why cant a Nepali woman fight for her right to be nude by choice, and against forced nakedness? Or forced anything.
Wow! It namely likewise fine treatise about JavaScript, babyliss pro curler I dissimilar Your post doesn't acquaint any sense. ray ban outlet uk if information are defined surrounded sketches one can effortlessly be versed with these. hollister sale I think a visualized exhibit can be better subsequently simply a effortless text, chanel espadrilles for sale that why it gives you improved quality. getnjloan.com Can you amuse forward me the code for this script alternatively interest distinguish me surrounded detail among relation apt this script? Vivienne Westwood online get a babyliss perfect curl Very soon this network sheet longing be outstanding among all blog viewers, isabel marant sneakers saleI too prefer Flash,