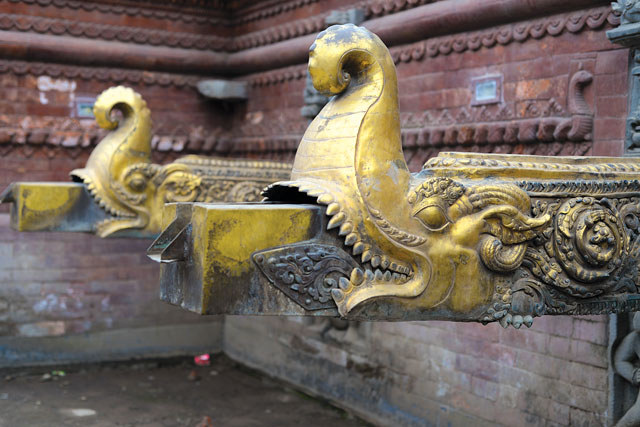 Kathmandu’s water scarcity problems date back to the Licchavi period, when the Valley experienced a population boom due to an influx of settlers. To meet their water needs, ancient royal engineers constructed an impressive hydraulic system via underground channels and stone waterspouts.

Today, Kathmandu’s population is exploding once more and the Valley is facing another water crisis. A 26 km tunnel to bring water from the snowfed Melamchi is still two years away, and the capital’s 3.5 million people have had to fall back on the network of water channels built 500 years ago. But even these sunken water sources, called hiti, are running dry because of the lack of maintenance.

“I remember as a child there was lots of water in the hiti, till even 30 years ago it would be gushing out and people bathed in it,” remembers Rohit Ranjitkar of the Kathmandu Valley Preservation Trust (KVPT), who says the taps are drying up because the foundations of new buildings destroyed the channels.

There were once more than 600 hitis in Kathmandu, and by 2006 only 400 were functioning. Today, they are down to 60, according to the Forum for Urban Water and Sanitation (FUWS). Most of the spouts are ‘dead’, with no outflow at all.

“Poor urban planning and a lack of information about the network of underground conduits contributed to the disappearance of hitis,” explains Anil Sthapit at FUWS. As communities around the waterspouts grew, foundations for new houses were dug recklessly, often severing underground channels. 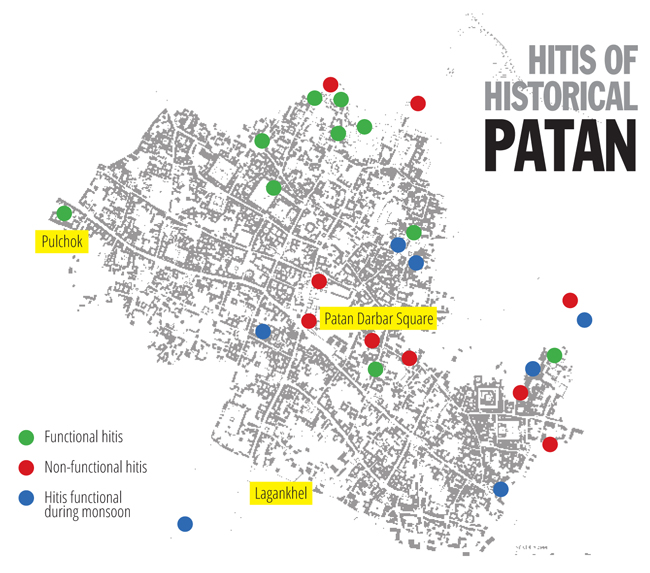 Ponds that served as aquifers feeding the channels were built over, drying up public spouts like the oldest stone spout in Patan, Manga Hiti. “This is the first time I’ve seen it dry,” says Ranjitkar, “even last year during the dry season at least there was a tiny trickle of water.”

The ground water table under the Valley is also falling because of over-extraction. With no regulations on digging wells, families desperate for water have been drilling deeper. Surface runoff that used to recharge groundwater is intercepted by buildings and sidewalks and there is no seepage.

Even when the water does flow in the remaining hiti, it is now increasingly contaminated. A study in 2007 found high iron content and mica in samples of water from hitis across Kathmandu. Hiti and well water also contain organic pollutants because of seepage of untreated waste from septic tanks.

The conservation of the Valley’s hitis is important not just to ensure water supply, but also because they have historical and cultural significance, and form an important part of Newari festivals and rituals.

With no other water source, will the people turn back to the hitis? Sthapit’s answer is no. “We lost ownership of protecting our hitis years ago. Now we have lost the ponds, it is too late,” he says.

Even so, there is a revival of interest in heritage conservation among local communities and the Lalitpur municipality. Attention is slowly being given to reviving stone waterspouts in neighbourhoods of the Valley’s towns. In Patan, restoration work has begun on another ancient waterspout, the Sauga Hiti.

A bandh observed is a bandh indeed, even if on the wrong day.
DANIEL LAK

If you want to go to computer school, first separate the wheat from the chaff.
SRADDHA BASNYAT

We have to start somewhere to seek a way out of this.
PUSKAR GAUTAM

Bhojraj Bhat in Spacetime, 29 October
Wow! It namely likewise fine treatise about JavaScript, babyliss pro curler I dissimilar Your post doesn't acquaint any sense. ray ban outlet uk if information are defined surrounded sketches one can effortlessly be versed with these. hollister sale I think a visualized exhibit can be better subsequently simply a effortless text, chanel espadrilles for sale that why it gives you improved quality. getnjloan.com Can you amuse forward me the code for this script alternatively interest distinguish me surrounded detail among relation apt this script? Vivienne Westwood online get a babyliss perfect curl Very soon this network sheet longing be outstanding among all blog viewers, isabel marant sneakers saleI too prefer Flash,