The Small-Heavy Vehicle Section of the Transport Management Office in Ekanta Kuna receives so many threatening letters from private bus cartels that they don’t even raise eyebrows anymore. Threats of violence have become the norm, and this is the main reason public transport is in such a sorry state in Kathmandu.

There are more than 250 bus ‘committees’ registered under the Federation of National Transport Entrepreneurs (FNTE) and they are actually cartels that want to protect route monopolies at all cost – by threatening the government and new bus companies. The comfort of commuters and public service is not the priority of the bus mafia that is said to enjoy political protection -- some of them are even owned by senior bureaucrats and security officials.

Last week, a Nepali Times reporter approached the Bagmati Zone Chief of the FNTE, Dharma Rimal, posing as a potential investor interested in operating new buses on the Kathmandu-Bhaktapur route. Without mincing words, Rimal warned the reporter: “Careful, there might be problems for you if your new buses operate without our consent.”

Rimal continued in a threatening tone: “It is we who decide who is allowed and who is not on this route. You will regret it if you defy us.”

When asked how come transport syndicates appear to be more powerful than the government, an official at the Transport Management Office admitted: “The FNTE is so powerful the government just cannot go against it. The kind of threats we receive if we issue route permits without their consent is frightening." Hemanta Sherchan of City Yatayat wanted to operate onthe Bhaktapur route, but got only a limited permit to operate 10 high capacity modern buses from Kalanki just up to Pepsi Cola. Sherchan freely admitted to us that the only reason he secured the permit was because of his own political connections.

“I was told by other entrepreneurs not to operate big buses because it would take their business away,” he said. What also helped was Sherchan’s affiliation with a transport committee close to the UML, and he is also an adviser to the FNTE. He revealed that all members of the transport federation have to be close to one party or other.

Protests and vandalism are the norm when the government tries to increase capacity on routes or allow better bus services to new operators. Officials who have tried to end the monopolies have never been successful, and may even face violent attacks like a transport officer in Pokhara who was shot and injured in 2004.

Basanta Adhikari, the new chief at the Transport Management Office, denies there is any undue pressure. “We have nothing to do with any transportation committee and we are against syndicates,” Adhikari said defiantly. “We are free to issue new route permits as per the existing laws.”

However, the reality does not bear this out. Free market policies adopted by the government in the 1990s were supposed to improve the quality of public transportation, but the sector is in the stranglehold of cartels. Not only are city and long-distance bus services unreliable and uncomfortable, they are also downright dangerous -- more than 16,000 people have been killed on roads in the last 10 years because of reckless driving, poor maintenance, overcrowding and the lack of investment in upgraded services. Poor maintaneance of obsolete vehicles also means that bus exhausts are a major source of fine particles and gases in the Kathmandu air. Particles below 2.5 microns in diesel soot lodges deep in the lungs can be absorbed into the bloodstream, causing cancers.

There are more than 10,000 public buses operating in over 200 routes in the valley, but most are overlapping, ad hoc and offer poor quality service in ramshackle buses. The government’s effort to phase out smaller public vehicles is facing opposition.

Tulasi Sitaula, former Secretary at the Ministry of Physical Infrastructure and Transport, says the only path to more efficient public transport and cleaner air quality is to dismantle syndicates: “The government has the power to shut down all transportation committees and break the monopoly, but it doesn’t dare do it.”

Currently, Sajha Yatayat is the only semi-government cooperative. More than 250 transportation committees are functioning as NGOs despite repeated calls from the government to get registered as companies under the transportation law. 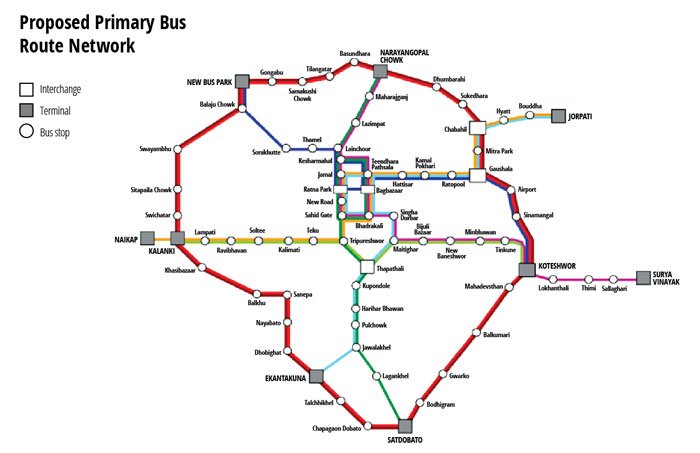 Supported by the Asian Development Bank (ADB), the report is politically untenable at present. Current bus cartels would have to run as amalgamated companies and compete with each other. Dipak Shrestha of KSUTP admits the recommendations need political will for implementation.

“Transportation entrepreneurs have to understand that we are not trying to displace their business. We are trying to restructure the routes to improve the quality of service,” he says.

KSUTP is readying a pilot project to run 17 medium-size buses in the Samakhusi-Ratnapark-Sinamangal routes and negotiating with the syndicates that dominate the route.

Birendra Swar of Department of Transport Management told Nepali Times: “We are relocating small public vehicles to the tertiary routes proposed by the KSUTP.”

Meantwhile, the Transport Management Office will stop renewing route permits of public vehicles older than 20 years from 28 February as part of public transport management in the valley.

Shot by the mafia Bus syndicates are so powerful they will stop at nothing when it comes to protecting their monopolies, as Jeevan Sedhain (above) found out 13 years ago when he was chief of the Transportation Management Office for Gandaki Zone in Pokhara.

Despite threats from the bus mafia, Sedhain issued permits for new 20 micro-buses, 25 trucks, and eight intercity buses on the Kathmandu-Pokhara route. The syndicate operators picketed his office for months but Sedhain didn’t back down.

One day he was walking in Kathmandu, he fell to the ground. On regaining consciousness after four days, he found himself at TU Teaching Hospital with a gunshot wound in his hip that paralysed him below the waist.

“I analysed the capacity and public demand and issued permits accordingly, I didn’t give in to threats or offers of bribes. But look at me now, I am disabled, I have lost hope that the police will ever catch the culprits,” says Sedhain as he limps to his new job at the Ministry of General Administration.

He is convinced public transportation will remain shoddy and dangerous until the bus mafia is dismantled and the regulator freed from political interference.

This time it is nothing less than the future of our freedoms that is at stake.
CK LAL

The bastards of war

The lessons of war and everyday life are often simple and similar: equal rights, equal development. For women and men.
DANIEL LAK

The newest agreement in tourism cannot remain just a paper tiger.
ARTHA BEED
Wow! It namely likewise fine treatise about JavaScript, babyliss pro curler I dissimilar Your post doesn't acquaint any sense. ray ban outlet uk if information are defined surrounded sketches one can effortlessly be versed with these. hollister sale I think a visualized exhibit can be better subsequently simply a effortless text, chanel espadrilles for sale that why it gives you improved quality. getnjloan.com Can you amuse forward me the code for this script alternatively interest distinguish me surrounded detail among relation apt this script? Vivienne Westwood online get a babyliss perfect curl Very soon this network sheet longing be outstanding among all blog viewers, isabel marant sneakers saleI too prefer Flash,