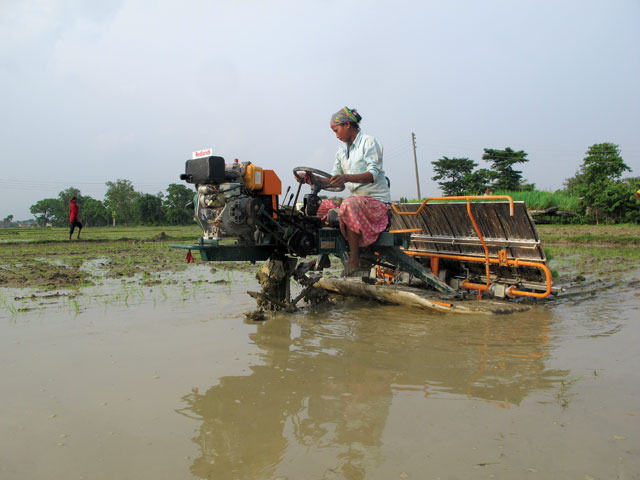 PICS: SONIA AWALE
Best job in the world: Sabita Chaudhary, 25, drives a transplanter seeding a rice field in Morang on Tuesday. Twenty-five farmers would have spent two days to transplant rice in this 1.5 hectare field that she finished in just one hour.

Sweat trickling down her face, brow furrowed in concentration, Sabita Chaudhary steers her power transplanter with precision, seeding paddy in neat rows on a flooded field. The seedlings are stacked in trays at the back of the machine which plants them over 1.5 hectare land in one hour, a job that would have earlier taken 25 people two days to do.

Even as Nepal’s annual rice production keeps dropping due to the shortage of farmland, fragmentation of holdings, labour shortage and falling productivity due to government neglect, here in the plains of eastern Nepal there is a quiet green revolution happening. 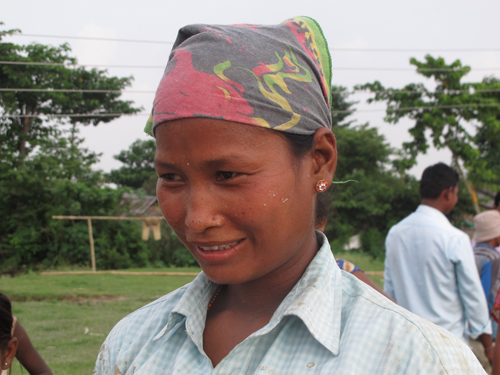 Sabita Chaudhary during her break.

“I was scared of the machine in the beginning but now I can’t imagine planting with my hands,” said Chaudhary, while she took a break on Tuesday, observed as rice planting day. She was among 25 women trained to drive power tillers and transplanters by the Biratnagar-based Nepal Krishi Company which is working with farmers’ groups to mechanise and improve productivity.

Nepal’s average annual paddy harvest is 6 million tons, and another 600,000 tons is imported from India. However, cheaper Indian rice is a disincentive for many farmers. Harvests are also stagnant because arable land is shrinking: Morang district alone lost 10 per cent of its area under rice cultivation to urban sprawl in the last ten years. 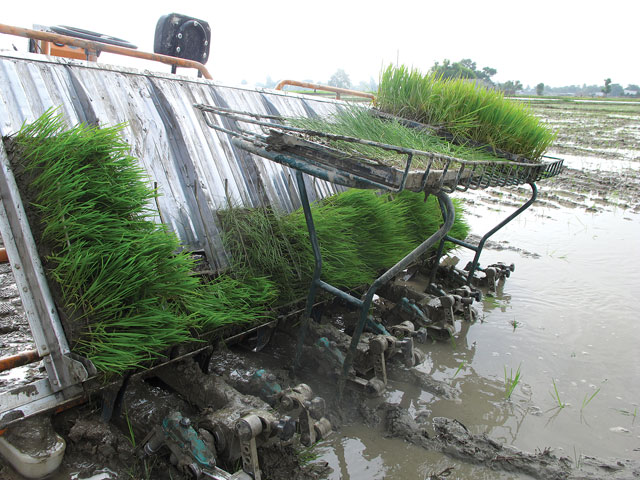 Trays with 10-day-old seedlings at the back of the automatic transplanter. Mechanising rice farming boosts productivity.

“If we can increase average production by one ton per hectare, we will not have to import from India, and we have proved that Nepali farmers can achieve that,” said Rajendra Uprety at the District Agriculture Office in Morang, who has convinced farmers to switch to System of Rice Intensification (SRI), a technique which allows farmers to double crop yields with half the amount of seeds.

Combining SRI with mechanisation and setting up farmers’ cooperatives, boosts productivity, creates jobs and empowers many women like Sabita Chaudhary. If what is happening here can be scaled up to the national level, Nepal could even export rice again.

“We are aiming at a paradigm shift in the way we do agriculture,” said Birendra Basnet, founder of Buddha Air whose interest in farming led him to set up Nepal Krishi Company which now helps four cooperatives in Sunsari and Morang to upgrade management and mechanise agriculture. Using power tillers to level fields, transplanters for seeding, weeders and harvesters makes SRI even more viable by saving time and cutting waste. SRI plants 10-day old seedlings one row at a time so that weeders can be used. This system needs less water, and individual seedlings can give up to 27 tillers (see box).

While Nepal’s average rice production is 2.8 tons/hectare, mechanised SRI in cooperatives here yield up to 9 tons/hectare, using half the amount of seeds and slashing costs. But even with this, farmers cannot compete with cheap Indian rice, so Nepal Krishi Company is moving into premium Basmati varieties. 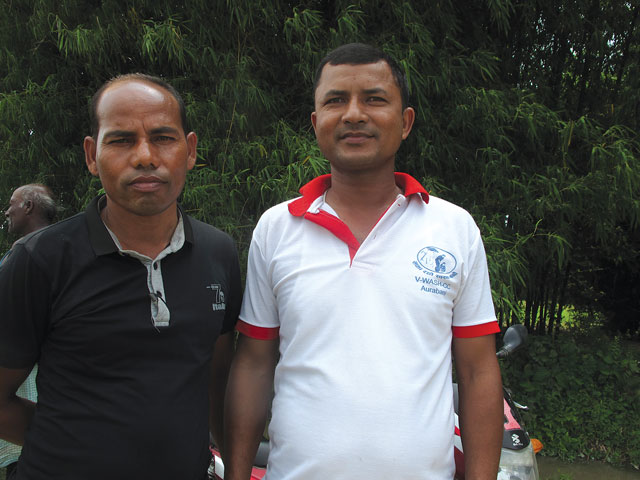 Nageswor Majhi and Raju Singh Chaudhary of the Samjhana and Samuhik cooperatives in Sunsari have transformed agriculture in the district.

Outside the all-Tharu village of Simariya, transplanters have been at work all day seeding rice in the flooded fields of members of Samjhana Cooperative. Visitors to a nearby greenhouse are greeted by the sweet, distinctive aroma of Basmati seedlings growing in trays. Vivekananda Jha of the Nepal Krishi Company hopes Basmati will be the cash crop to make the cooperatives prosper. 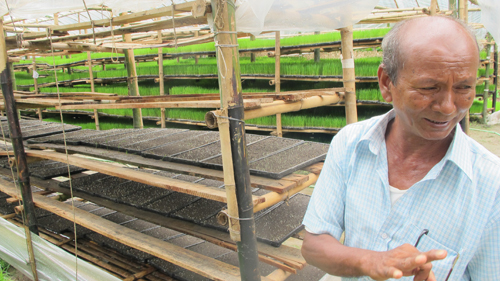 Basmati seedlings growing in trays in a nursery.
“Growing Basmati with mechanised SRI in cooperatives is a win-win-win,” explained Jha. “It will bypass the problem of cheap Indian rice and increase income.” Jha is now helping farmers with working capital loans, storage facilities and even setting up their own rice mill in future.

Nepal’s agriculture is caught in a vicious cycle: young men don’t have jobs so they migrate, and the shortage of men affects farm output. From Simariya alone, 1,500 young men have migrated to Qatar and Malaysia in the past year.

But Raju Singh Chaudhary, 30, wasn’t one of them. He decided he wouldn’t allow himself to be cheated by middlemen to go and work in 45 degrees heat in the Arabian desert. He got together with five other young men to set up Samuhik Cooperative in his village of Arabani. Family income has gone up, the women drive power tillers and transplanters, and the group has created jobs.

"Look there, they are all working, not a single person has gone abroad. They don’t even go to Biratnagar to look for jobs anymore,” Raju Singh Chaudhary said.

One would think that as CEO of Nepal’s largest private airline, Birendra Basnet would be more at home in an air-conditioned office in Kathmandu. But he is in his element here, sweating in the mud. “We are still in the pilot phase, but word will spread when the harvests come in,” he said. “Farming is my passion, you are dealing with lives and you are making things grow.”

Best of both worlds 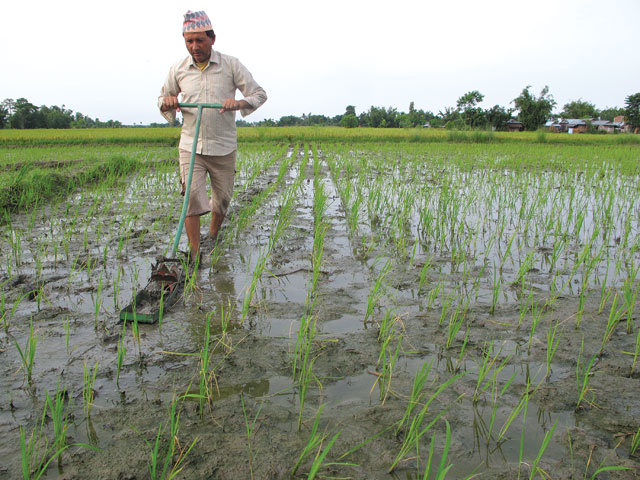 Govinda Dhakal wades into his field of ripening rice in Govindapur of Morang district to gather 27 tillers that have grown from a single rice seedling he planted in April. Dhakal (pic, above using a weeder on his transplanted rice field) is an avid follower of the technique called System of Rice Intensification (SRI) that uses less seed to yield more rice and needs less water. “It seems like a miracle, and it is,” Dhakal tells Nepali Times, “I am living proof of that.” 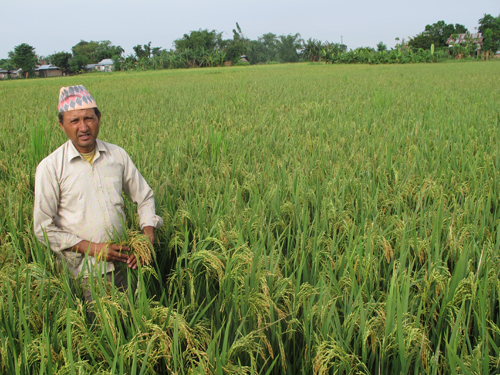 Govinda Dhakal counting 27 tillers that grew out of a single rice seedling he planted in April following the SRI technique.

Indeed, governments, international agricultural organisations, and even farmers have been slow to adopt SRI because the technique first adopted by a Jesuit priest in Madagascar in 1983 seems almost too good to be true. Most people ask: so, what’s the catch? The surprising thing is that there isn’t.

Traditional rice planting in Asia floods the fields mainly as a deterrent against insects and for weed control. But flooding reduces rice output. Also, farmers transplant clumps of up to eight one-month-old seedlings at one time in the hope that some of them will grow. But this makes the rice seed compete with itself, reducing harvests.

SRI plants just one seedling at a time on a wet field that is not flooded. This means that for half the seeds, farmers can double their rice harvest. SRI can be used for local or hybrid varieties alike, and just needs to be planted in neat rows to allow weeding machines to pass, and further apart (20cm) so seeds don’t have to compete for nutrients and light.

The downside of SRI is that it can be more labour intensive if weeding machines are not available, and it needs knowledge of timely drainage and careful planting. But the benefits in greater harvests far outweigh these shortcomings. In Morang, SRI produces up to 9 tons per hectare, compared to Nepal’s national average of less than 3 tons per hectare, and it does so using 35 per cent less water, less than half the seed and fertiliser.

SRI promoter Rajendra Uprety says combining SRI with mechanisation can increase benefits even more: “Using power tillers, transplanters and weeders makes SRI even more productive, it is the best of both worlds.” Indeed, even with partial SRI farmers in Morang have doubled their harvests and reduced their costs by half.

“With agriculture contributing 80 per cent of the GDP, there should be more research and newer technologies to increase productivity,” said Hari Dahal, former secretary at the Ministry of Agriculture. “And that could be achieved by mechanising agriculture.”