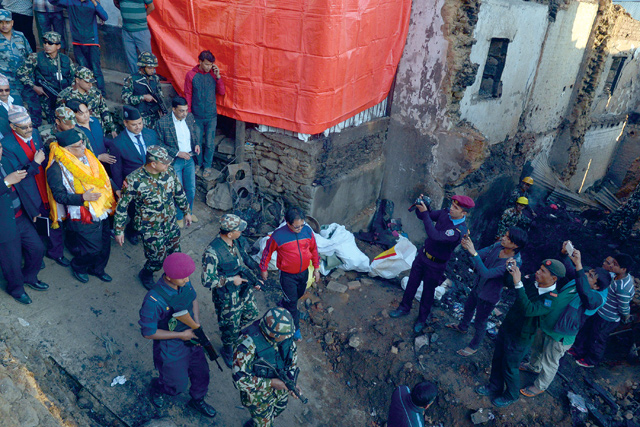 A profusely garlanded Prime Minister Dahal toured Bhojpur on Tuesday, which was damaged in a fire. The scene was heavy on symbolism: destroyed homes, heavy security, hollow promises of help from the leadership and citizens as spectators (pictured, above).

Second-time prime minister Dahal is in a tight spot once again as the country marks the tenth anniversary of the peace accord this week. He is preparing to table the 2nd Amendment to the Constitution in Parliament in the next few days, but no one seems to be on his side.

He assured the Madhesi parties he would deliver this time, but they are not satisfied with his compromise. The UML, the second largest party in parliament, has told him point blank it will not support the bill. His coalition partner, the Nepali Congress, is letting him stew.

But Dahal is putting on a brave face. He told Nepali Times this week he doesn’t feel burdened by his work. A self-proclaimed risk-taker, Dahal may be tempted to take a political gamble since it is a make-or-break for his career. He may go ahead and register the bill, and pass the blame on to the UML and NC.

Maoist-Centre politburo member Bodh Raj Upadhyay says: “The Chairman has lost his charisma, the cadres are frustrated and our party is on the verge of collapse. He needs to make a bold move and quick. If he succeeds, it will revive our party and his own political career.”

But the UML is opposed to Dahal’s proposal, saying it is not in the interest of Nepalis, and is directed by a foreign hand. The Federal Alliance has rejected the amendment bill, and even the Madhesi Front is luke warm, fearing a backlash from its plains constituency.

The NC is backing Dahal, but its President Sher Bahadur Deuba may want this deal to fail so he gets the credit for resolving the constitutional impasse when he takes his turn to be prime minister in May. If Dahal fails and the political crisis deepens, Deuba could have his chance even earlier.

Looking for my brother

Little did we know that only 2-3 km away Kanak was spending his third night out in the open, drinking rain, talking to wild animals to keep them away, and esperately anchoring himself on rocks so that he would not slip off the ledge to the river below.
KUNDA DIXIT

Nepalis can soon start collecting their reward for not polluting the earth
NAVIN SINGH KHADKA
Wow! It namely likewise fine treatise about JavaScript, babyliss pro curler I dissimilar Your post doesn't acquaint any sense. ray ban outlet uk if information are defined surrounded sketches one can effortlessly be versed with these. hollister sale I think a visualized exhibit can be better subsequently simply a effortless text, chanel espadrilles for sale that why it gives you improved quality. getnjloan.com Can you amuse forward me the code for this script alternatively interest distinguish me surrounded detail among relation apt this script? Vivienne Westwood online get a babyliss perfect curl Very soon this network sheet longing be outstanding among all blog viewers, isabel marant sneakers saleI too prefer Flash,