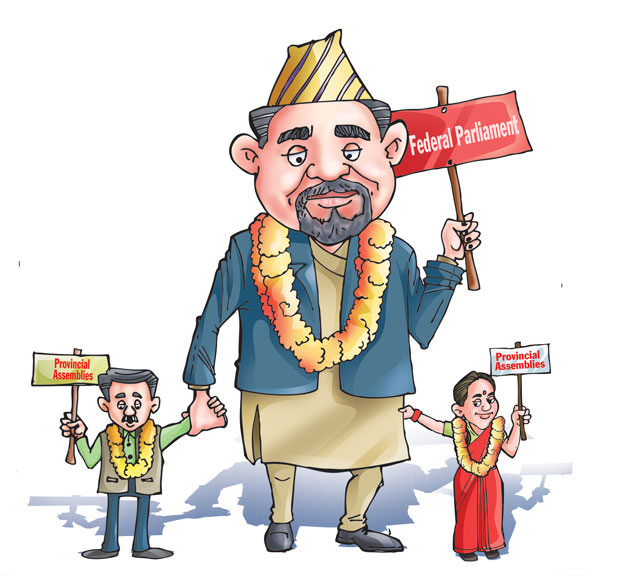 In a month or so, when the new Parliament and seven state assemblies come into being, Nepal will join a list of countries ruled by federal governments.

Parliamentary and provincial elections being held simultaneously in two phases (26 November and 7 December) will be the last step towards replacing Nepal’s obsolete unitary state with a federal system.

But electing the Parliament and state assemblies does not necessarily ensure the kind of decentralisation that Nepalis have long needed. As the director of The Asia Foundation Nepal, George Varughese, argues in a commentary, those who ran and benefitted from the centralised system are desperately clinging to the status quo.

‘It shows how difficult it is to change a mindset towards orchestrating governance and development from Kathmandu,’ he writes.

That each province will elect its own parliament from these polls is what makes them really historic. But no political party has come up with manifestos exclusively for provinces, and only a very few prominent faces are in the race to be in the state assemblies.

In every constituency, a parliamentary candidate is leading his (rarely her) party’s election campaign and provincial candidates are simply following along like sidekicks. This reveals the top leaders’ proclivity for the unitary setup, and how disinterested they are in real decentralisation.

Apart from 275 members of the new Parliament, 550 members of state assemblies will also be elected over the next two weeks. But the government is yet to choose provincial capitals and appoint state chiefs.

The weeks following the polls could be a window for the government to sort out all these logistical and technical issues. Even then, there will be hurdles. The biggest of them is the lack of authority accorded to provincial governments.

Khimlal Devkota, an expert on fiscal federalisation says: “The centre has decentralised so little revenue rights that provincial MPs will not have money even to buy fuel.” Devkota describes these elections as the last hurdle to cross before federalising the country, but warns that provinces will not survive without additional fiscal autonomy.

“Once these elections are over, we must revisit and revise constitutional provisions about fiscal devolution,” he says. “Decentralisation of duties won’t suffice. We need to federalise fiscal rights as well.”

Anti-India feeling in Nepal, like anti-Americanism everywhere, plays into the hands of extremists.
DANIEL LAK

There is less and less justification for keeping the ban on Nepali women going to work in the Gulf.
HEMLATA RAI
Wow! It namely likewise fine treatise about JavaScript, babyliss pro curler I dissimilar Your post doesn't acquaint any sense. ray ban outlet uk if information are defined surrounded sketches one can effortlessly be versed with these. hollister sale I think a visualized exhibit can be better subsequently simply a effortless text, chanel espadrilles for sale that why it gives you improved quality. getnjloan.com Can you amuse forward me the code for this script alternatively interest distinguish me surrounded detail among relation apt this script? Vivienne Westwood online get a babyliss perfect curl Very soon this network sheet longing be outstanding among all blog viewers, isabel marant sneakers saleI too prefer Flash,