Cashing in on tragedy 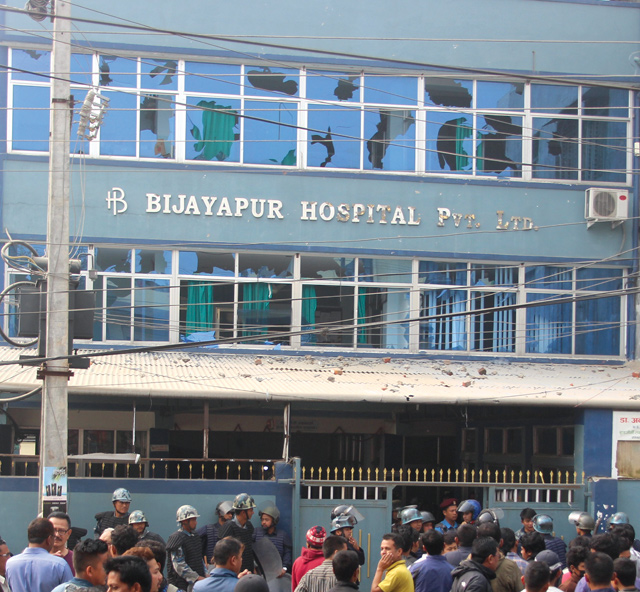 There is not a week that goes by that a hospital isn't vandalised or health workers assaulted by angry mobs after a relative dies while being treated. Doctors say the spike in incidents reflects Nepal's extreme politics and the erosion of overall rule of law in the country.

Demoralised medical personnel are now reluctant to treat patients who are in serious condition, and refer complicated cases to other hospitals. Patients are therefore receiving less than optimum care.

To be sure, over-commercialisation of private hospital treatment, medical malpractice by poorly trained doctors, and unintentional lapses after admission have fed public perception that doctors are reckless and unscrupulous. However, a Nepali Times investigation of several recent cases of hospital vandalism and abuse show they were motivated not so much by grief of bereaved family members, but by extortion and a tendency for political activists to cash in on tragedy.

“If a person who walked into hospital for a check up ends up dead, it is natural for relatives to be upset, but there are people who make the situation worse and take advantage of the case to attack and threaten hospitals to extort money,” says Gopi Neupane, former general secretary of the Association of Private Health Institutions Nepal (APHIN).

Most hospital administrators, doctors and nurses interviewed for this report did not want to be named. But each related multiple cases in which they were assaulted, verbally abused by mobs, and their hospitals turned into virtual war zones. There have been instances where police resorted to baton charges in a hospital in Bharatpur, and had to fire tear gas in a Pokhara hospital after patients died.

Patients get complications even with the best care, and doctors cannot guarantee the recovery of everyone. Several doctors admitted that they now exaggerate how serious a patient is when briefing relatives just in case they are blamed. “There are professional middlemen who hover around hospitals waiting for a patient to die. Most times they don’t even know the patients, but they assure relatives they will force the hospital to pay a high compensation and divide it up,” says one senior surgeon at a Kathmandu hospital.

As soon as news spreads of a patient’s death, up to 300 people immediately gather shouting slogans, throwing stones and attacking doctors. The worst affected are maternity hospitals, trauma centres, and private centres like Om Hospital or Neurology Hospital.

An administrator who has served in four private hospitals in Kathmandu in his career says it is much the same everywhere, and the frequency of attacks has increased because of political instability and corruption.

Things have got so bad that medical staff are fighting back. After the video of the young doctor being humiliated in Charikot was posted on social media, medical personnel forced the hospital to close its In-Patient Department. The hospital used to treat 300 patients a day.

“The community wanted an investigation and better health services, but they never made any financial demand and were against closing the facility. The incident was escalated and politicised by groups with vested interests,” said Hima Bista, of Possible, an NGO that works with the government to run Charikot Hospital.

A team including the Home Ministry and Ministry of Health investigated the Charikot case, and recommended long-term security for staff and patients.  The government is now tabling a Healthcare Worker Safety Act (see box) to set up a fund to compensate genuine victims, hospitals and health workers.

“The most vulnerable to vandalism are trauma centres where there is a low chance of survival and treatment is expensive,” explains the hospital administrator.

Doctors and nurses at maternity hospitals are also often assaulted when a baby or mother dies at childbirth. This is because a pregnancy involves two lives and often the mothers walk into hospital and relatives expect happy news. “Very often you are not dealing with relatives, and the protesters have little medical knowledge," a senior gynaecologist told Nepali Times. One case she recalls vividly is of a patient who died at childbirth, but her baby survived. An unruly crowd soon gathered, destroyed hospital property, intimidated staff and refused to take the body unless their demand for compensation was met. In the end, the hospital waived the delivery fee, and admitted the infant in neonatal intensive care for free.

These days, besides studying about disease and treatment, medical graduates also need training in crowd control and negotiations. But ultimately it is the government that has to provide security to hospitals.

“Government has to monitor and perform hospital audits. Accountability and transparency are a must and the public-private-partnership model needs to be understood,” says Bista. “The public needs to know that medical care is compromised if we function in a climate of fear.” 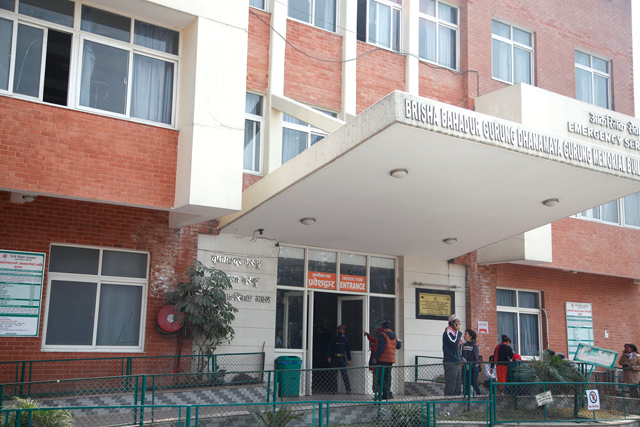 An increase in vandalism at hospitals has prompted the government to table the Healthcare Worker Safety Act in consultation with hospitals. The new bill allows surgeons, doctors, nurses, paramedics and health institutions to pay a predetermined membership fee which will be used to compensate real victims and to repair vandalised hospitals. The government has already put Rs 5 million in the kitty.

“Doctors too can make mistakes. If health professionals are responsible for the death of a patient, they have to be investigated and punished according to the law, but you cannot do this by mob rule,” said Gopi Neupane of APHIN (Association of Private Health Institutions Nepal).

The new Act provides a sense of security to health professionals and it is hoped to make them more responsible. It will also help doctors who unintentionally make mistakes to deal with the aftermath.

Last year, when a patient died in Everest Hospital, the relatives followed legal procedures for justice. An investigation found evidence of negligence and medical malpractice, and the family was fully compensated without middlemen.

A healthy free for all, Bikash Gauchan

If you are planning to volunteer in Nepal, beware of potential scams
IRENE PERONI
Wow! It namely likewise fine treatise about JavaScript, babyliss pro curler I dissimilar Your post doesn't acquaint any sense. ray ban outlet uk if information are defined surrounded sketches one can effortlessly be versed with these. hollister sale I think a visualized exhibit can be better subsequently simply a effortless text, chanel espadrilles for sale that why it gives you improved quality. getnjloan.com Can you amuse forward me the code for this script alternatively interest distinguish me surrounded detail among relation apt this script? Vivienne Westwood online get a babyliss perfect curl Very soon this network sheet longing be outstanding among all blog viewers, isabel marant sneakers saleI too prefer Flash,