Not yet boiling point

The people of the Tarai are angry, but not angry enough to join another protest movement led by Madhesi politicians 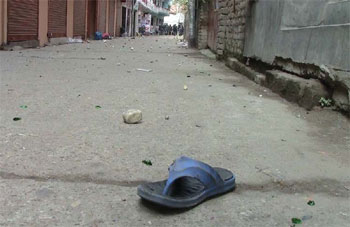 SHYAM GUPTA
After the CA Chair Subhas Nembang, apparently under pressure from the ruling coalition, initiated a vote on the new constitution last month, the Maoist-Madhesi opposition alliance has been on warpath — not withdrawing their protest programs even after Nembang halted the voting process.

UCPN(M) Chair Pushpa Kamal Dahal has declared Kathmandu, Madhes and ethnic strongholds of the hills as three ‘fronts’ of the alliance’s protests. But he knows that the real test of the success of his agitation will be the Madhes if it is to have any effect in pressuring the government.

Reduced to third party status after the second CA elections, the Maoists are trying to regain some strength through street protests. The Madhes-based parties, on the other hand, want to restore their foothold in the Madhes by trying to ignite a political movement.

In remote villages of the Tarai however, the people are in no mood for another stir. “It is not easy to make people hit the streets,” says Kaushalendra Srivastav of this district in the central Tarai. He is disillusioned by the divisions among political parties, and the lack of progress in jobs and development.

The Maoist-Madhesi parties, however, are not the only political players in the Madhes. CK Raut, who was repeatedly detained on charges of treason for his separatist pronouncements, and later freed, has increased his political activities. Matrika Yadav, who formed his own party when CPN (M) became UCPN (M), is also active in the Madhes. After serving a one-year jail term on charges of corruption, JP Gupta is spearheading his Tarai-Madhes National Campaign. There has also been a surge in the activities of shadowy armed groups.

The political landscape of the Madhes is rapidly changing, but the parties that claim to be champions of the cause of the Madhesi people seem oblivious to this. For them, it is politics as usual.

The people of Madhes are frustrated with the prolonged deadlock and politically incorrect statements by ruling party leaders, particularly UML Chief KP Oli who antagonised locals by equating Madhesis with Indians. Separatists like CK Raut have made the best out of this political fallout.

The ruling NC-UML and the opposition Maoist-Madhesi disagree over whether five Tarai districts (Jhapa, Morang, Sunsari in the east and Kailali and Kanchanpur in the west) should be part of the Madhes or the hill provinces in the new federal set up. The ruling parties want these districts to be clubbed with hill provinces, the opposition parties want all five to remain as part of the southern provinces.

Chakradhar Pandey, a local MJF-Nepal leader in Kapilvastu who played a key role in the Madhes movement, says if there is another movement in the Madhes, it will be directed not only against the ruling coalition but also the Madhesi parties who, according to him have failed to fight for Madhesi autonomy and self-rule.

This is not the first time the Madhesi people are demanding autonomy. In fact, it was first raised in the 1950s by Nepal Terai Congress. In the 1980s, the Gajendra Narayan Singh-led Sadbhawana Party demanded autonomy of Madhes from hill administration but was snubbed by Kathmandu for being ‘separatist’ and ‘pro-Indian’.

Srivastav, who was a long time aide to Singh, believes the attitude of the hill people towards the Madhesi people has not changed, and is at the root of the demand for Madhes autonomy.

‘The people of Madhes want to be citizens of this country on their own terms, and if Kathmandu does not respect their desire, they will never be emotionally integrated in the national mainstream,” he says.

Across the Tarai, ordinary people see the leaders using their grievances for their own political gain. The recent unrest in Simara (pictured, above) and Kalaiya were also seen as such. They are not angry enough to join any major reenactment of the Madhes Movement of 2007.

But if the leaders in Kathmandu over-read their electoral mandate and disregard Madhesi sentiments, the people of the Tarai could rise up again. And no one knows how far they will go the next time.

The benign weather is lulling us into believing that aside from the garbage and the traffic, things are still pretty much what they once were.
BARBARA ADAMS