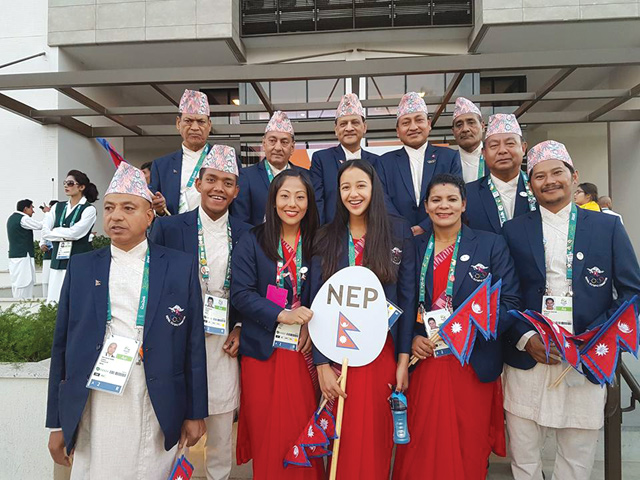 The Games of the XXXI Olympiad are underway in Rio de Janeiro, and nations eagerly await the moment when they can savour the pride that comes with seeing their athletes sparkle, shine and carve their names in the history books.

Some go on to become legends, inspiring whole new generations of youth to one day realise their own dreams to compete at the ultimate sports platform on earth.

Sport is a unique and indispensable tool for a country’s development, as well as a means to promote peace, culture and education. In particular, it provides young people with hope.

Nepal's legitimacy in the Olympic Movement depends on it upholding the highest standards of ethical behaviour and good governance. All members of the Nepal Olympic Committee (NOC) must adopt, as their minimum standard, the Basic Universal Principles of Good Governance of the Olympic Movement.

Otherwise, we will continue to be exposed to public criticism when the NOC sends more officials than athletes to the games. Such behaviour seriously undermines any NOC-defined mission, and the selection of the athletes is also compromised.

So why is it that we in Nepal have thus far not been able to foster this shared vision that the world has so positively embraced?  Is it because most Nepalis do not really believe that sports can make a positive contribution to the development of youth and the quality of life?

Sports is never neutral. It can teach values and ethical behavior, or not. It can help people develop a positive self-image and respect for others, or not. It can strengthen community life, or not.

Millions of people around the world practice sports as a healthy pastime, or for the sheer fun of it. Sports can bring people together, foster friendship, reinforce healthy lifestyles, and build civic pride and community participation. Or it can be about violence, drugs, cheating, match fixing, and winning at any cost.

This is why it is essential — more so now than ever before — to actively support positive values in sports, in simple and powerful ways. This is everyone’s responsibility, especially those associated with colleges, sports clubs, National Federations, National Sports Council and, most importantly, the NOC.

Modern Olympism places ‘sport at the service of the harmonious development of humankind, with a view to promoting a peaceful society concerned with the preservation of human dignity’, as stated in the Olympic Charter.

This week in Brazil, seven Nepali athletes — three men and four women, including the youngest athlete participating in the Rio Olympic Games — are representing our country, making us proud. We stand equal with all participating nations from the five continents, symbolised by the five interlaced rings of the Games.

The intangible benefit of being part of this Olympic Movement is that it inculcates a way of life based on the joy of effort, the value of good example, and social responsibility. It also fosters respect for mutual understanding, and the spirit of friendship, solidarity and fair play.

Excellence refers to giving one’s best, either on the playing field or in life. It is not only about winning, but also participating, making progress in personal goals and striving to do our best.

Friendship encourages links and mutual understanding between people, and building a peaceful and better world through solidarity, team spirit, joy and optimism. The Olympic Games inspire people to overcome political, economic, gender, racial or religious differences, and to forge friendships in spite of those differences.

Respect includes respect for oneself and one’s body, respect for one another, for the rules as well as for the environment. It refers to the attitude of fair play that athletes should have, and to a commitment to avoid doping.

The following principles of Olympism amplify the core values and allow them to be expressed in a way that drives far-reaching social change, which is where Nepal needs to focus:

Deshanter, 5 August
Wow! It namely likewise fine treatise about JavaScript, babyliss pro curler I dissimilar Your post doesn't acquaint any sense. ray ban outlet uk if information are defined surrounded sketches one can effortlessly be versed with these. hollister sale I think a visualized exhibit can be better subsequently simply a effortless text, chanel espadrilles for sale that why it gives you improved quality. getnjloan.com Can you amuse forward me the code for this script alternatively interest distinguish me surrounded detail among relation apt this script? Vivienne Westwood online get a babyliss perfect curl Very soon this network sheet longing be outstanding among all blog viewers, isabel marant sneakers saleI too prefer Flash,