...but a lot more tourists from China would visit if there was more information about Nepal online in Mandarin
Claire Li Yingxue in POKHARA 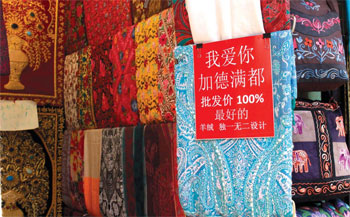 Elaine Wang Yiwei
One of the most dramatic changes along shopfronts in Thamel and Pokhara these days are the number of signs in Chinese. In the sidewalks you are now more likely to hear Mandarin than English, or even Nepali, as the number of visitors from China soars.

Nepali shopkeepers have also learnt Mandarin and converse fluently with Chinese tourists. Even in Chitwan, the safari guides can tell you all the Chinese names of animals and along the Annapurna trail, lodge-owners have a smattering of Mandarin.

A lot of this is borne out of necessity since the number of Chinese tourists is growing, and most of them do not speak English.

A walk around Pokhara’s Lakeside and in Thamel there are signs of a demographic shift in tourism. What used to be a hub for European backpackers and a haven for Nepali revelers is today dominated by tourists from China. And, businesses are cashing in on the growth.

Signs after signs in Chinese greet you from the many haphazardly constructed buildings that make up this tourist district. Nowhere is this more prominent than the lane from Jyatha leading towards Thamel which is now aptly called Chinatown. 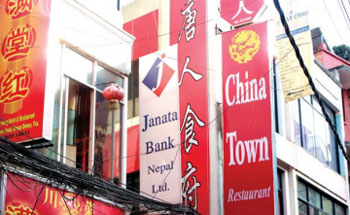 Chinese businesswoman Sun Junhong came to Nepal last year and opened Jiudingyuan Hotel, one of the dozen Chinese-owned hotels in the area. Sun was encouraged to open a business here by her sister who owns a Chinese restaurant just few metres away.

“During the busy season, all our rooms get booked,” says Sun who is from Sichuan province. Most of the hotels and restaurants in Thamel’s China town are owned by Chinese nationals like Sun who are encouraged to come to Kathmandu by relatives. “The government issues business licenses to foreigners to open these establishments, that’s why it is easy,” says Sun.

However, the retail shops and travel agencies that dot this lane are owned by Nepalis, one main reason is that foreigners cannot apply for retail licenses.

Uttam Pokharel who runs a travel agency in Chinatown says learning the language is key to dealing with Chinese tourists.

“Only few of them speak English therefore we have to learn Chinese,” says Pokhrel who has trained all his staff to speak the language.

Aijaz Ahmad Rather of The Cashmere House, a popular store in the areae echoes Pokhrel’s statement. Rather started studying Chinese three years ago along with his brother. “Back then there was only one Chinese teacher, today there are many,” he says.

Besides learning the language, shop owners like Rather have also learned to use an online Chinese payment system, which makes it more convenient for him to deal with Chinese customers. Rather has downloaded popular Chinese chatting apps to communicate with his Chinese customers, such as QQ and Wechat.

Says Rather: “Several years ago, I was waiting for American shoppers, now I’m waiting for Chinese.”

While visitors from China have been coming to Nepal for decades, it was after 2009 that their numbers took off. According to Ministry of Culture, Tourism and Civil Aviation, the number of Chinese tourists increased sharply to 113,173 in 2013 from only 32,272 in 2009, a 250 per cent jump.

Most young Chinese like to travel by themselves, they prefer to look up place to visit and stay, or airlines to fly online before they arrive. However, when they search for information about Nepal, it is still all in English. This week’s Pokhara’s Street Festival and Chitwan’s Elephant Festival would have been huge attractions to Chinese tourists, but theri online promotions only had Facebook pages which is in English and blocked in China.

International travel websites like Tripadvisor and booking.com have Chinese versions, and welcomenepal.com is one of the few Nepali sites that has a Chinese page. Others, like nepaltourism.info, visitnepal,com, and nepaltravels.com, are available only in English and don’t seem to have woken up to the fact that the Chinese are coming.

On location in Pokhara 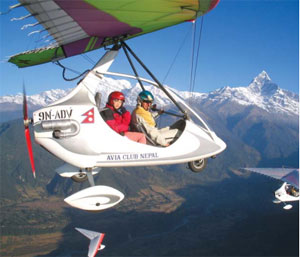 Pokhara surpasses Kathmandu as the most popular destination for Chinese tourists in Nepal because of the popularity of a Chinese movie shot on location here -- so it is hardly surprising that businesses are now amping up efforts to cater to this group.

In the last two years alone, Pokhara’s Lakeside has seen eight Chinese restaurants open and more are set to start business in the coming months. Signboards in Chinese are now a common sight. Chilly Bar, a popular continental eatery recently started serving Chinese buffet after getting a throng of Chinese visitors.

“It has been two years since we started getting more Chinese tourists,” says Gita Lamsal Sigdel who has a paragliding store. A letter hung outside the shop in Chinese reads: ‘It was so exciting, we enjoyed paragliding here!’

A Chinese movie Up in the Wind shot in Pokhara was a hit among Chinese youth when it was released last year, driving the popularity of this lake city among young Chinese who want to enjoy the scenery and adventure that the city offers just like the characters did in the movie. In addiiton, Chinese tourist guidebooks list Pokhara as one of the “Top Ten places in the world to see before you die”. 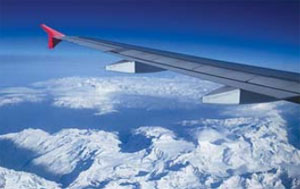 Air links across the Himalaya from Nepal to China are about to get much more traffic with the announcement that Sichuan Airlines is to start flying Chengdu-Lhasa-Kathmandu from this month, the fourth Chinese carrier connecting Kathmandu to the mainland.

The number of weekly flights from Chinese cities to Kathmandu is expected to double to 70. By February, Himalaya Airlines, which is a new joint venture between Tibet Airlines, Yeti Airlines and another Nepali partner will operate Lhasa –Kathmandu with two Airbus 319s.

China is now the second largest tourist source country to Nepal, and the number of Chinese tourists has nearly doubled in the past year. “We are getting a lot of inquiries from Chinese agencies,” says Prakash Neupane, the founder of the domestic online booking site, Nepflights.

Nepflights is aiming at Chinese customers because of the potential for growth. “The prediction is that within one year China is going to be the Number One tourist market for Nepal,” Neupane told Nepali Times.

King Gyanendra balances his constitutional role with the need to help sort out the countrys political crisis from behind-the-scenes.
KUNDA DIXIT

"Where decentralisation has brought development, you don’t see Maoists."

Guns and roses in Delhi

Nepal is not land-locked, it is India-locked. And our challenges are too big for just our limited means.
CK LAL

Break for the border

Stolen cars are some of the most lucrative goods traded across the border with India. But that may be about to stop.
SHER BAHADUR KC in BUTWAL
Wow! It namely likewise fine treatise about JavaScript, babyliss pro curler I dissimilar Your post doesn't acquaint any sense. ray ban outlet uk if information are defined surrounded sketches one can effortlessly be versed with these. hollister sale I think a visualized exhibit can be better subsequently simply a effortless text, chanel espadrilles for sale that why it gives you improved quality. getnjloan.com Can you amuse forward me the code for this script alternatively interest distinguish me surrounded detail among relation apt this script? Vivienne Westwood online get a babyliss perfect curl Very soon this network sheet longing be outstanding among all blog viewers, isabel marant sneakers saleI too prefer Flash,