Post-earthquake, Nepal government cracks down on use of drones
Hannan Lewsley

Till an hour before David Beckham’s charity football game against school children in Bhaktapur on 6 November, the BBC production team and UNICEF were waiting for the final permission to use a drone to get aerial footage of the match.

The papers from the Home Ministry and the Ministry of Information and Communication were in order, but the green light from the Nepal Army was still awaited. Minutes before the starting whistle came the disappointing news: the Army had turned down the request to use a UAV (Unmanned Aerial Vehicle) to film the game.

The Nepal Army’s action highlighted official sensitivity about the growing proliferation of UAVs and the increasing need for explicit legislation on their lawful use not just in Nepal, but around the world. 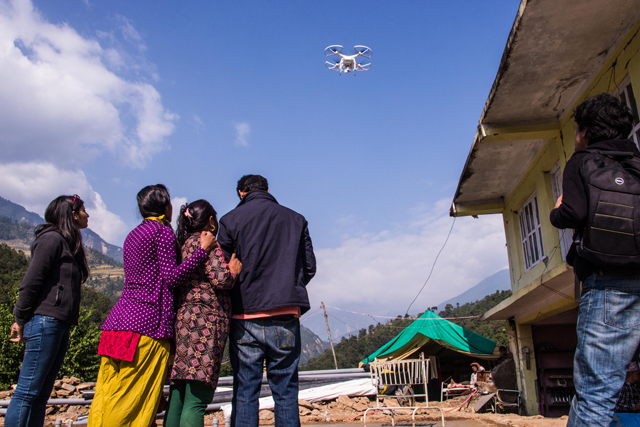 Villagers in Sindhupalchok witness a drone for the first time. Photo: Hannan Lewsley

Prior to the April earthquake drones were not regulated, and many rescue and relief agencies brought their own craft for reconnaissance and to document the destruction. And it was the uncontrolled influx of UAVs through international media and humanitarian teams that the government was forced to take action and restricted their use. (See box)

Now, anyone looking to deploy drones needs to apply for a license from the Civil Aviation Authority of Nepal (CAAN) and some 55 permits were granted since April and about the same number rejected based on objection from the either CAAN, the Home Ministry, the Ministry of Information and Communication. All three of which must approve the application for a license to be issued.

“After the earthquake it was easy for people to collect aerial footage and use it overseas with a potentially negative impact,” explained Subhash Jha of CAAN, whose main worry was about the chances of mid-air collisions with aircraft on approach into Kathmandu. The worry at the Ministry of Information and Communication was about surveillance and security, while the Army appears to have been concerned after a Chinese national was caught filming its headquarter in Kathmandu from a drone.

Now, after obtaining a license UAV operators must be accompanied by a liaison officer from the Home Ministry, and there have been several instances of the Home Ministry confiscating drones that contravened guidelines.

As they become more popular and accessible (the cheapest ones can be ordered online for as little as Rs 2,000) governments around the world are scrambling to come up with rules. There will be some 1 million drones sold around the world this year. Bangladesh has put an outright ban on all drones until further notice. Whilst India has banned their use in public airspace. Drones fitted with cameras are banned in Thailand. Drones could be used freely in Japan until one landed on Prime Minister Shinzo Abe’s rooftop earlier this year, and rules were tightened. China, where 80 per cent of the drones sold worldwide are manufactured, allows UAVs with less than 7kg to be flown. This week, the US introduced new laws requiring drones to be registered with the federal government.

However, UAVs can be put to a lot of positive use in Nepal as a significantly cheaper, safer and less obstructive option to a helicopter for reconnaissance and rescue, conservation, anti-poaching activities, and the film industry. In Nepal, their use in adventure tourism and creating videos for the promotion of trekking, mountaineering and rafting expeditions is limitless.

In Papua New Guinea where tuberculosis prevalence is among the highest in the world Medecins Sans Frontiers utilised drone technology to collect samples of suspected tuberculosis cases from remote locations, saving both time and lives. There could be similar use in Nepal.

Disaster mapping of earthquake damaged areas in Panga have been turned into physical maps accessible and contributable by the community, producing comprehensive and essential visual representations of damage.

Patrick Meier, is the director of UAViators which coordinates drone-based data collection in disaster areas and operated in Nepal following the April earthquake. He says a coherent policy is essential. “It sounds like different officials are saying different things about the rules regarding their use, the impact of the post-earthquake data is high but most of the information is not public due to those initial sensitivities.”

Don’ts for UAVs less than 20kg:

• over or within 150m of a congested area

• within 50m of any vehicle or building

• out of line of sight of operator

• cannot be used at night

Going green is no longer a fad, but a necessity. Meet the exhibitors at Nepali Times eco fair to learn innovative ways to be environment friendly.

Don't push the Madhes to another violent movement
NAVIN JHA
Wow! It namely likewise fine treatise about JavaScript, babyliss pro curler I dissimilar Your post doesn't acquaint any sense. ray ban outlet uk if information are defined surrounded sketches one can effortlessly be versed with these. hollister sale I think a visualized exhibit can be better subsequently simply a effortless text, chanel espadrilles for sale that why it gives you improved quality. getnjloan.com Can you amuse forward me the code for this script alternatively interest distinguish me surrounded detail among relation apt this script? Vivienne Westwood online get a babyliss perfect curl Very soon this network sheet longing be outstanding among all blog viewers, isabel marant sneakers saleI too prefer Flash,