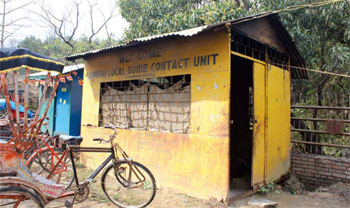 ANYBODY HERE?: A kiosk set up by Lumbini Development Trust to help visitors find guides lies abandoned at Mahilwar, Lumbini.
While the Kathmandu Valley receives plenty of recognition from the wider world for heritage conservation, Nepal’s much older archaeological sites in the Tarai are in a state of neglect.

The wonderful traditional urban architecture of Patan and Kathmandu is threatened by over-building, and many old buildings need maintenance and rehabilitation.The rivers, streets, squares, chowks and houses are in need of protection from pollution and degradation. But this neglect is nothing compared to the actual ruination of major historical sites in the Tarai. No wonder the Madhesis complain of marginalisation.

The site at Lumbini is a monument to the Gautam Buddha, but even Buddha himself would avoid staying very long at the site. It is an indictment both of government bodies responsible for its development (notably the Lumbini Development Trust) and of the various foreign agencies that have provided the funds that have led to the construction of appallingly insensitive and inappropriate buildings.

The Lumbini Development Trust’s neglect of the Ashoka Pillar and stupa at Gotihawa in Kapilvastu means that they are now at risk of collapse and/or disintegration. The famous pillar, which was erected in around 300 BC, has been submerged in an overgrown and rubbish-strewn pond surrounded by a decrepit and broken railing. Several cracks have appeared where there were none, and it is in sore need to tender loving care. The surrounding area has been used by locals for grazing and as a rubbish dump.

Rajesh Gyawali, Chairman of the Kapilvastu Conservation Association, is reported as saying that, though the relevant ‘stakeholders’ (both government and non-government) are aware of the situation, nothing has been done, and the archaeological officer of the Lumbini Development Trust, Krishna KC, said, "We have not been able to protect the site due to technical and financial reasons." Ke garne?

Even worse is the state of neglect of the legendary and historical city of Janakpur. The airport is a miserable, crumbling edifice from which roads of utterly appalling quality lead generally into the centre of town. A visit to the excellent, ashram-like Janakpur Women’s Development Centre, where local women work together to produce sensational art like paintings, ceramics, screens, T-shirts, and other art and craft, drawing on their own Maithili cultural traditions, is extremely difficult by virtue of its location.

No one would recognise Janakpur today as the birthplace of Sita (or at least the location of her ‘discovery’ by the old Janak while performing a puja) and the place to which Lord Rama came to woo her and eventually beat off the other suitors by lifting the Great Bow of Shiva to be selected as her groom.  There is no tourist office and no indication of the legendary status of this place. No bookshops sell copies of the Ramayana for visitors, no picture galleries show photographs of the important sites all around.

The extraordinary legacy of great ponds and lakes, most of them of religious significance that Janakpur is home to, is something most municipal councils would make the most out of. They would advertise their importance and significance in popular tourist guides, and make sure that they were cleaned and maintained on a regular basis.

Two years ago, the Asian Development Bank (ADB) provided money to improve roads, ditches and landfill sites as part of an Urban Rehabilitation Programme. Last week, locals took to the streets to protest because nothing has been done with the funds. The main bajars and shopping areas were shut down, academic institutions were closed, and vehicles came to a halt as the demonstrators gathered to demand the implementation of the ‘development plan’, chanting slogans, criticising in particular the Minister for Physical Infrastructure and Transportation,  Bimalendra Nidhi.

The municipal authorities, who are actually more to blame than the hapless minister, deployed police to prevent an ‘untoward incident’. A bus was torched at Ramananda Chowk. That was a pity, as Janakpur badly needs its public transport, just as it needs decent roads to help people move around and get to places of historic, archaeological and religious significance. A tourist minibus service between Janakpur and Kathmandu would also help bring much needed visitors and tourists to the town - travel agents and bus companies, please note.

Before and after in Kathmandu Valley, Alok Tumbahangphey

The monsoon is conducive to staying home, but what's behind those thunderclouds?
RABI THAPA

"We want to see Nepal develop"

Nepali Times talked to Nitish Kumar, Chief Minister of Bihar about the success and challenges of his government and Bihar's unique relationship with Nepal

Bihar is on the right track, but it still has a long way to go
ANURAG ACHARYA and NAVIN JHA in BIHAR
Wow! It namely likewise fine treatise about JavaScript, babyliss pro curler I dissimilar Your post doesn't acquaint any sense. ray ban outlet uk if information are defined surrounded sketches one can effortlessly be versed with these. hollister sale I think a visualized exhibit can be better subsequently simply a effortless text, chanel espadrilles for sale that why it gives you improved quality. getnjloan.com Can you amuse forward me the code for this script alternatively interest distinguish me surrounded detail among relation apt this script? Vivienne Westwood online get a babyliss perfect curl Very soon this network sheet longing be outstanding among all blog viewers, isabel marant sneakers saleI too prefer Flash,