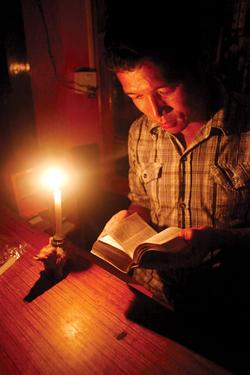 SANJOG MANANDHAR
It took Nepal 100 years to generate 700 MW of hydropower, but it took us just 10 years to add 600 MW of diesel generators. Nepal now ranks among the worst countries in the world in transmission leakage, wasting more than a third of the energy in the grid.

The energy sector is in a state of disarray with piecemeal ideas, duplication and too many cooks spoiling the broth. We do not even know what our hydropower, solar, wind or other energy potentials are, and yet we have politicians spouting superlatives every chance they get.

The chronic loadshedding is a vivid proof of the lack of vision, poor management and governance failure. Nepali planners should know that to achieve 1 per cent increase in economic growth energy generation needs to increase by 1.5 per cent.

Nepal’s three items of import that are increasing most dramatically are petroleum products, motor vehicles that run on it, and cooking gas. We spend the equivalent of 40 per cent of the annual budget and more than half our foreign currency income buying these three items.

However, if we had focused on renewable energy to drive our transportation, cooking and manufacturing, we’d have to import only minimal petroleum for buses and aviation. That would mean huge savings on our petroleum import bill, which could be invested in developing further infrastructure, boosting growth and cutting our trade deficit. There would not be any more use for Nepal Oil Corporation, and the corruption-bred shortages it spawns.

Electricity in the energy mix would reduce demand for firewood, on which 72 per cent of Nepalis still depend for cooking. On a national level, a shift to renewables would mean that Nepal’s political dependence on the outside world would also diminish as we become more self-reliant. Our prime ministers would not have to say “the keys are not in our hands” anymore.

The shift must come first in a push for electric public transport, turning petrol pumps throughout the country into fast-charging stations. There must be a policy shift to import only electric vehicles, especially for public transportation. Nissan Motors is collaborating with Bhutan to convert all government vehicles and taxis to battery powered vehicles by 2020, there is no reason Nepal can’t do the same.

Generation of cheap electricity would allow households to switch to electric stoves, instead of gas, firewood or kerosene. It may seem like a utopian dream during these times of power cuts, but it is possible to have policies in place to generate and distribute enough electricity. Electricity proliferation can only happen when an effective law capturing this vision is put into place. But the existing Electricity Act is obsolete and defunct. We could even go as far as to say that drafting a new Electricity Act is more important for the welfare of the people than drafting a new constitution.

An Act with attractive incentives to investors would bring in outside equity into energy development. Obstruction of energy infrastructure, extortion and militant unionism could be punishable with tough laws. The Act must begin issuing one unified license on a competitive bidding basis and giving all clearances to the developer within 12 months through a one window policy. Land acquisition must be abolished and land lease started for run of river projects.

Additionally, while giving better concessions to energy developers than those offered by other nations, stringent penalties for delays in getting financial closure and starting electricity production must be put into place. Local people must get 10 per cent investible shares prior to project construction so they share both potential benefits and risks – but any local person affiliated with political parties or creating disturbances should be excluded. And all the contents of this act should supersede or override the conflicting contents in any other prevalent acts or policies, thereby providing absolute and unequivocal clarity to the direction of Nepal’s energy sector.

It is time Nepal emerged from centuries of darkness, and enacting a new Electricity Act would light our way.

Sujit Acharya is the Chairperson of the Energy Development Council, an umbrella institution for the Nepal’s energy sector that is working on a draft of a new Electricity Act.

Western Nepal faces a food emergency and a health emergency. Women and children are affected the most.
ARUNA UPRETY in DOTI

Chandra Bahadur Gurung of the RPP in Jana Bhabana, 3 November
Wow! It namely likewise fine treatise about JavaScript, babyliss pro curler I dissimilar Your post doesn't acquaint any sense. ray ban outlet uk if information are defined surrounded sketches one can effortlessly be versed with these. hollister sale I think a visualized exhibit can be better subsequently simply a effortless text, chanel espadrilles for sale that why it gives you improved quality. getnjloan.com Can you amuse forward me the code for this script alternatively interest distinguish me surrounded detail among relation apt this script? Vivienne Westwood online get a babyliss perfect curl Very soon this network sheet longing be outstanding among all blog viewers, isabel marant sneakers saleI too prefer Flash,