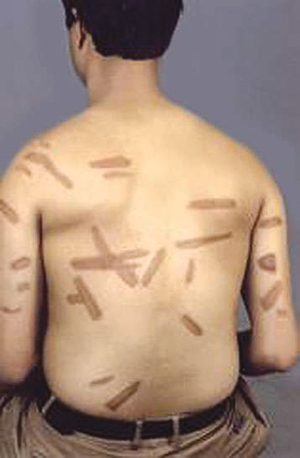 Every day, commuters, civil servants, and diplomats travel up and down Maharajganj, along the dusty street that is being widened. The President’s office and the Teaching Hospital are across the road.

Just over the wall inside Mohan Shumshere’s former palace is the Bhairabnath Battalion where thousands of suspected Maoists were detained, tortured, or exterminated between 2003-2005. It was a concentration camp in the heart of the city.

Lawyer and journalist Jitman Basnet, now 36, was picked up on 4 February 2004 and released on 18 October 2005, enduring 258 days of torture. He was blindfolded, hands tied behind his back and locked up in lightless solitary confinement. His hair-raising story as told in the book 258 Days of Darkness is a vivid account of what many Bhairabnath inmates went through. Basnet was lucky he got out alive.

Many of those detained at Bhairabnath were civilians in the wrong place at the wrong time. Some were caught when friends broke under torture and gave random names

Basnet was earlier detained by the Maoists in his native Solu for having written articles deemed critical of them. There were genuine Maoists inside Bhairabnath, too: Krishna KC, who has also written a book about his incarceration, Himal Sharma, and many others. The army had penetrated the Maoists’ Kathmandu task force and used information from torture for further arrests. But the method was notoriously unreliable and thousands of innocent people across Nepal were made to suffer or die.

With the mind of a lawyer and the observational skills of a journalist, Basnet tells us in stark and simple words what he and fellow prisoners went through. His story needs no literary embellishments. His independence gives the book authenticity that other accounts of Bhairabnath detainees lack. 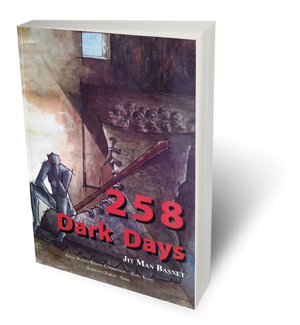 258 Dark Days by Jit Man Basnet, Translation, Edited by Bruce Van Voorhis, Asian Human Rights Commission and Advocacy Forum Nepal, 2009, 198 pages, Paypal: $11
258 Days of Darkness is translated from the original Nepali and reads like classic Solzhenitsyn: ‘The strange thing about torture is that after relentless beatings night and day, you don’t feel the pain anymore. You go into a kind of trance.’ Or: ‘They told me to take my shirt off, but I couldn’t because it was stuck to the wounds from the previous night’s beatings. So the soldier just ripped it off.’

Basnet writes about being able to see the red neon sign of Himalayan Bank from across the road through a gap in his blindfold and of hearing traffic noise. Amidst all the cruelty, he is baffled to see his torturers lovingly fondle a puppy, or hearing bells ringing at the barrack temple. ‘How can people like these be religious?’ he asks himself.

Basnet tried to find out as much as he could about his torturers and lists their names in his book. Some have gone on to UN peacekeeping duties, some have been promoted in the army and others are retired.

“Many of them took a great deal of pleasure in inflicting pain on us,” recalled Basnet who still has scars of his beatings. It was because of Basnet’s testimony that the truth about 49 inmates of Bhairabnath having been executed and cremated at the Shivapuri National Park has come out. Basnet still gets threats for writing his book. He is now working on a new book on Nepal’s recent politics and wants to put his past behind him. However, he still gets nightmares.

Passing Bhairabnath as the slanting sun illuminated its gates, Basnet looks away. “What a beautiful palace and they turned it into a burial ground. I can’t bear to remember what went on behind those walls.”

Moderate madhesis are being drowned out by radicals
SHEETAL KUMAR

Why contracting out Kathmandus water supply management is the only option left
ASHUTOSH TIWARI
Wow! It namely likewise fine treatise about JavaScript, babyliss pro curler I dissimilar Your post doesn't acquaint any sense. ray ban outlet uk if information are defined surrounded sketches one can effortlessly be versed with these. hollister sale I think a visualized exhibit can be better subsequently simply a effortless text, chanel espadrilles for sale that why it gives you improved quality. getnjloan.com Can you amuse forward me the code for this script alternatively interest distinguish me surrounded detail among relation apt this script? Vivienne Westwood online get a babyliss perfect curl Very soon this network sheet longing be outstanding among all blog viewers, isabel marant sneakers saleI too prefer Flash,