Kunda Dixit
When Rajman Gurung (above, left) tried to convince his friends to open a new trek trail in the Annapurna Conservation Area (ACA) 15 years ago, they all thought he had lost it.

The conflict was at its height, the ACAP office in Ghandruk had just been bombed, and they convinced him instead to go abroad. Gurung went to Dubai and worked as an electrician for five years. But this dream of a new Annapurna trail never died.

After returning five years ago, Gurung picked up where he left off to get ACAP permission for the trail to Dobato and Khopra. Today, the route is catching on among trekkers who want to get away from the crowds on the main Ghorepani-Ghandruk trail, and Gurung is adding rooms to his Mt Lucky Lodge in Dobato.

Half-an-hour up from the lodge is Mulde Peak, which commands a majestic sweep of the central Himalaya from its 3,650m perch. This is Poon Hill minus the crowds, higher and closer to the Annapurnas.

From Dobato it is a one-day trek on to Khopra on the ridge overlooking the Kali Gandaki and face-to-face to Dhaulagiri.(see map below) And if your thirst of adventure hasn’t been quenched, there are the holy lakes and glaciers that camps up the side of Annapurna South. Gurung has collected money from lodge owners along the Khopra trail to improve the track and accommodation. 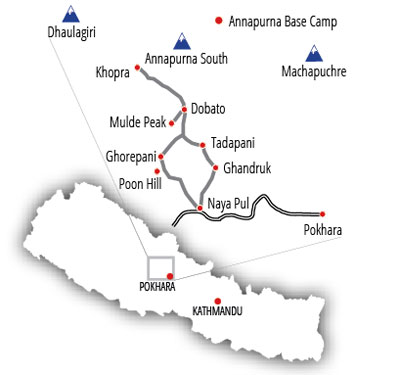 He says: “This will reduce the tourism pressure on the main trails, and help save the environment by spreading the tourists around.” Indeed, once word gets around that Khopra and Mulde Peak have better views than Poon Hill, there are bound to be more people here.

ACAP was reluctant to give Gurung permission for the Khopra Trek, but he persevered and used all the arguments he could muster. “I understand you have to balance development and the environment,” Gurung says he told ACAP, “but keeping people poor and in a museum will not save nature.”

Dobato and the Khopra Trek need just 25 trekkers a day passing through to break even, and that is a small fraction of the hundreds that come to Ghorepani every day. Perhaps Gurung has hit upon the future model of eco-tourism in Nepal: 5-7 day off-grid treks from roadheads, with guides and  porters, living in local lodges and homestays, eating local food and getting up close and personal with villagers.

Says Gurung: “I could have stayed in Dubai, but it is much more fulfilling to contribute to your own place. We must not wait for the government to do things for us, we must do it ourselves.”

The State of the Himalaya, Apa Sherpa

"It is a crime to not provide good education in public schools."

Voreland and his wife Anne Marie came to Nepal 38 years go to teach at the newly-established Luitel School in Gorkha.

When the social fabric is in tatters, it is only a small step away from civil militia to death squads, private armies, vigilantes and warlordism.
SEIRA TAMANG
Wow! It namely likewise fine treatise about JavaScript, babyliss pro curler I dissimilar Your post doesn't acquaint any sense. ray ban outlet uk if information are defined surrounded sketches one can effortlessly be versed with these. hollister sale I think a visualized exhibit can be better subsequently simply a effortless text, chanel espadrilles for sale that why it gives you improved quality. getnjloan.com Can you amuse forward me the code for this script alternatively interest distinguish me surrounded detail among relation apt this script? Vivienne Westwood online get a babyliss perfect curl Very soon this network sheet longing be outstanding among all blog viewers, isabel marant sneakers saleI too prefer Flash,