Back to the land 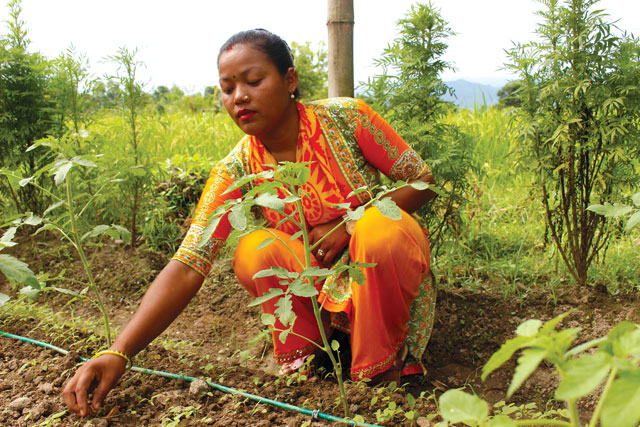 Ghaman Singh Magar worked day and night for four years in Malaysia to earn just Rs15,000 a month. Cheated by a recruiter who had promised a much higher salary, he ended up in a metal factory. Today, back home in Saune of Udaypur, Magar saves much more money from his vegetable and livestock farm.

“We can work hard in the Gulf or Malaysia, but we can earn just as much in our village and among our own family here,” says the 35-year-old, inspecting a cauliflower patch (right) damaged by last week’s heavy rainfall.

Business is so good, he leased another plot to expand vegetable production.     This district in the eastern Inner Tarai has historically either had too much rain or too little, discouraging the production of cash crops. Udaypur, therefore, has one of the highest rates of outmigration in Nepal, with villages like Saune and Bagaha having at least one male member from each family away.

But in recent years, migrant workers like Magar have returned to grow crops that earn hard cash.

Rajendra Rai was in Malaysia for four years, returned and then went to Dubai to work in an aluminium company. Despite long hours, he earned only Rs20,000 a month. Today, he makes more than Rs50,000 selling his farm produce.

“I’ve learned that we can comfortably raise families right here in our own village. I want to tell others that if you choose to stay back and work as hard as in foreign countries, you don’t need to go away,” says Rai.

However, floods like the one in the Eastern Tarai last month mean agriculture is still a high-risk profession, and income from traditional farming is not enough to sustain families. ICIMOD's Support to Rural Livelihoods and Climate Change Adaptation in the Himalayas (Himalica) through the Centre for Environment and Agricultural Policy Research, Extension and Development (CEAPRED) is training farmers in Udaypur in water and crop management, bio-composting, off-season vegetable production and cost-effective techniques like mulching, drip irrigation and tunnel farming.

“People don’t have to migrate for work because they can have a good income from sustainable agriculture here,” says Shyam Krishna Ghimire of CEAPRED.

Proof of this is Kabita Chaudhari (above), 26, who has a nine-year-old son and a husband who is working in Malaysia. Yet she single-handedly manages a farm and runs a tailoring business on the side (see box). Her family, which at one time didn’t have enough to eat, now earns over Rs150,000 yearly from the farm.   “After I learnt the right method of vegetable farming, I am more independent and I haven’t had to use any of the money my husband sends home,” says Chaudhari as she prepares to irrigate a new row of tomatoes. She has also paid off all her loans, and sends her son to an English school nearby.

Commercial vegetable farming has also reduced Udaypur’s dependence on neighbouring districts and India. “There used to be a shortage when the roads were blocked even for a day, but now it doesn’t make a difference because local farmers grow the vegetables we need here,” says Gayatri Purbe at the Gaighat market.

Despite the technical know-how and increased production, poor roads limit the options for farmers like Rai and Chaudhari. “While vegetable farming is a good option for returning migrants in Udaypur, farmers need better access and support systems,” says Amina Maharjan, an agricultural economist at ICIMOD. “Agriculture needs to be commercialised for it to be a sustainable source of income.” 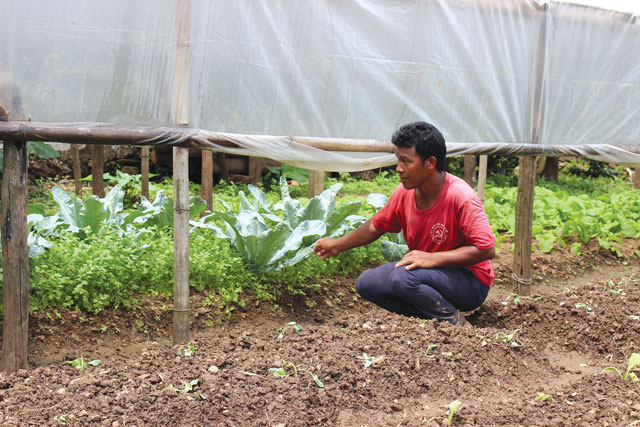 Shree Krishna Adhikari has been providing modern agro-technology services to farmers in Kathmandu for five years after returning from Israel, where he learnt about drip irrigation on a kibbutz farm.

“Traditional farming alone is not enough. For families to earn more from farms they need mechanisation to reduce the drudgery,” says Adhikari, 35. “The tax on imported equipment and agricultural tools should be reduced.”

The challenge for Nepal is to alter the perception that farming is hard work and only for poor people, and to reverse the trend of young people leaving their farming families after studies.

Siddhi Chandra Baral of the Asian Human Right and Cultural Development Forum returned from South Korea to prove to other young Nepalis that they can make a decent living by combining farming and tourism in their own country.

“We can grow local ethnic foods, run homestays and promote both our culture and our agriculture, while increasing income for families,” says Baral.

Shiv Chandra Mandal, a former government agriculture extension officer, is back after working in Israel, and agrees it is not necessary to leave Nepal to earn money, provided there is a sound business plan. But he adds: “There must be sufficiently large plots of land for commercial farming, hassle-free help for farmers, fixed production costs and earnings from cash crops.”

Rani Kumari Chaudhari had a dream that her daughter would grow up to be more successful than all her peers. Two decades later, her dream has come true.

Rani Kumari lost her husband when her daughter Kabita was just three. She took odd jobs at construction sites, earning Rs50 a day, but often there wasn’t enough for the mother and daughter to eat.

“I know how difficult it was for my mother to raise me, but she always wanted me to move forward,” says Kabita, now 26, and a mother of a child herself. “She encouraged me to study, attend agriculture workshops and get trained.”

A few years after the birth of their son, her husband Nageswor left for Malaysia. Back home, Kabita started learning about greenhouses, drip irrigation and growing organic and off-season vegetables.

“We had the land, but productivity was always low. I’m independent now because I can manage the household without using any of the money my husband sends home,” adds Kabita. She manages the entire farm on her own, earning Rs150,000 a year from selling tomato, cabbage, cauliflower, bitter gourd and chilli, as well as millet, wheat and maize.

Kabita’s tailoring shop is also doing well. When swamped with work, her mother helps out. But Kabita wishes her husband had stayed back to help on the farm instead of going abroad: “He is coming home soon, and this time I will try to convince him to stay. We can easily earn Rs4-5 lakhs a year right here.” 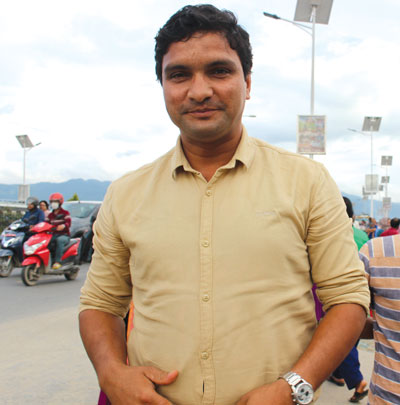 The conflict in Nepal forced Shree Krishna Adhikari (above) to leave his job of health assistant and migrate to Israel 15 years ago. He toiled in the heat in Gaza for nine years, survived Hamas rocket attacks by hiding in bunkers and was convinced the drip irrigation he saw in a nearby kibbutz farm could revolutionise commercial farming back home in Nepal.

“The weather and the war made it difficult. But I admired how the Israelis had made their desert green, and sold vegetables in Europe, and it got me thinking,” recalls Adhikari, 35: “If Israelis could do this in a desert, imagine what we can do with our fertile soil and rainfall.”

He returned to Nepal determined to farm, and helped transfer Israeli drip irrigation technology to farmers across Nepal to reduce labour cost, save time, and boost productivity by irrigating fields with limited water supply.

“When we first came back from Israel and started making greenhouses and farming, our neighbours thought we were mad: now they also want to learn how to do it,” he says.

Along with drip irrigation, Adhikari has adopted other techniques he learnt in Israel, like growing seeds with coco peat and nursery trays. Through his shop, Shalom Agriculture in Balaju, he sells UV-proof plastic for greenhouses, thermal shade and insect netting, net houses, tomato clips and mulching plastic to farmers across Nepal.

“We can only convince people not to leave for the Gulf if we can increase the productivity of the land by adopting new technologies,” explains Adhikari. “Agro-technology has made farming attractive to young people, and the government now needs to implement farmer-friendly policies.”

We need a durable framework for a minority government. It might be a good beginning to set a statutory limit of one prime minister per year, which roughly corresponds to Nepals record in the last 12 years.
PUSKAR BHUSAL

The power of positive negativism

So, the kangresis have discovered that honesty is the best foreign-aid policy.
PUSKAR BHUSAL

Something that he never did

A Japanese author writes an impassioned plea for justice in the case of Nepali serving life imprisonment for murder in Tokyo
SHINICHI SANO in TOKYO
Wow! It namely likewise fine treatise about JavaScript, babyliss pro curler I dissimilar Your post doesn't acquaint any sense. ray ban outlet uk if information are defined surrounded sketches one can effortlessly be versed with these. hollister sale I think a visualized exhibit can be better subsequently simply a effortless text, chanel espadrilles for sale that why it gives you improved quality. getnjloan.com Can you amuse forward me the code for this script alternatively interest distinguish me surrounded detail among relation apt this script? Vivienne Westwood online get a babyliss perfect curl Very soon this network sheet longing be outstanding among all blog viewers, isabel marant sneakers saleI too prefer Flash,