The malaise in medical care 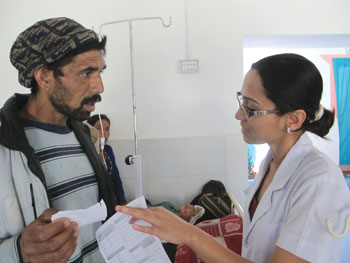 KUNDA DIXIT
When patients threaten doctors and demand a guaranteed treatment, we in the medical profession often wonder why the conversation couldn’t have started with a simple “hello” or a “namaste”.

In five-and-half years of medical training, we attend lectures on behavioural repercussions in dealing with patients. But when the starting point is a threat, it is a symptom of how tarnished the entire medical profession has become.

It was not as if there were no warnings. I often heard complaints from my seniors and colleagues as I struggled to make my way into the profession, finally finding a position as a Medical Officer at the District Hospital in Hetauda of Makwanpur district. Little did I know what I was getting myself into.

Despite apprehensions, I had entered the job full of enthusiasm, as any novice would. At the very least, I expected cooperation, if not appreciation, from both the administration as well as the patients. The problems that we faced in Hetauda District Hospital were [not markedly different from other healthcare centres in the country: frequent riots inside the emergency rooms, doctors and nurses manhandled by patients’ families. It didn’t take me and my colleagues long to realise that the people’s distrust came from an almost complete denial of their rights to accessible, affordable and quality healthcare.

Given the mismanagement of government institutions in this country, it doesn’t come as a surprise that the people’s frustration with hospitals has become ingrained. Patients have to sometimes travel days from neighbouring districts just to reach the hospital, making their agony worse. The chances of getting referred to an expensive, better-equipped private hospital are high since, despite being a regional hospital, Hetauda lacks most services.

So what prevented us, a team of trained professionals, from improving the condition of Hetauda District Hospital? Did we lack the authority to guide improvements? Did we lack funds or skilled personnel? Were we perhaps taking the inefficiency for granted? We discussed all these complaints in numerous staff meetings, but perhaps we had too many meetings and never made the effort to implement solutions.

Health facilities outside the capital do not have sufficient personnel to provide regular services. The doctor to patient ratio is low in the countryside, with low retention of doctors in remote towns. Hetauda, despite its road connectivity, is not a popular posting for physicians.

Surprisingly, this regional hospital in Hetauda was providing care equivalent to the Primary Healthcare Centre in Palung where I was transferred later. Despite allocation of funds for collaboration between medical consultants and house officers, there was no evidence that this was actually happening.

Medical professionals like myself have few options. We can either ignore the problem and opt for private practice, or we can pretend to care for patients while sucking up to the administration. However, it is impossible to be indifferent to the reality that only a small fraction of the health budget actually benefits patients. It became more difficult to speak up when I realised that the entire medical hierarchy was either directly involved or complicit in embezzling funds.

To be sure, there are many dedicated medical staff. New doctors enter the profession full of enthusiasm and try their best to abide by the Hippocratic Oath to expect nothing in return, driven only by the immense satisfaction that comes from the blessings of the needy.

But this means nothing to hundreds of thousands of patients who have to suffer the consequences of a broken and corrupt system. Not every doctor can be expected to be selfless and go out to remote districts without incentives. If that was the case, there would be no need for the hundreds of health assistants masquerading as doctors in the most neglected parts of this country. We may just have to console ourselves because, at the very least, people are getting some form of service.

Clearly, major reforms are necessary to improve, decentralise and restructure medical services in Nepal. However, endemic corruption stands in the way.

Free for all healthcare

Why some dotors stay, while others go away

Do hospitals need to be so expensive?

Post GP-leaders would do well to respond to the call of their time – not just democracy, but democracy to improve lives
PRASHANT JHA

Classes in the sun

Initiative Outdoor brings an 'out-of-classroom' experience to a new generation of Nepalis
FOO CHEE CHANG
Wow! It namely likewise fine treatise about JavaScript, babyliss pro curler I dissimilar Your post doesn't acquaint any sense. ray ban outlet uk if information are defined surrounded sketches one can effortlessly be versed with these. hollister sale I think a visualized exhibit can be better subsequently simply a effortless text, chanel espadrilles for sale that why it gives you improved quality. getnjloan.com Can you amuse forward me the code for this script alternatively interest distinguish me surrounded detail among relation apt this script? Vivienne Westwood online get a babyliss perfect curl Very soon this network sheet longing be outstanding among all blog viewers, isabel marant sneakers saleI too prefer Flash,