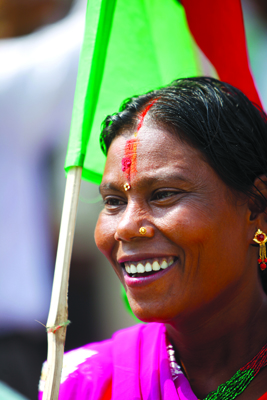 Sunita Mahara is a 35-year-old Dalit woman from Dhanusa and has been at the forefront of all protest rallies organised by the Federal Alliance in Kathmandu this week.

On Tuesday Mahara (pictured) was injured as riot police clashed with Madhesi and Janajati protesters. But the very next day, with her right elbow bandaged, she was back at a rally at Ratna Park. When Abhas Labh belted out the parody song that has become the anthem of the protests, Mahara had tears streaming down her eyes.

“The hill dwellers have always looked down at us as outsiders,” she told us in Hindi. “We are here to tell them that we are also Nepalis.” Three people were killed by police in Dhanusa during last year’s Madhes Movement.

Despite deep resentment among participants at the rallies, the protests led by figures from plains-based parties and indigenous groups have failed to gather momentum. Attendance has been dwindling and there are rifts within the Madhesi leadership. The government is hoping the protests will fizzle out, but even so, the Federal Alliance this week said it would continue the agitation in the capital for 10 more days.

After its six-month agitation in the Tarai backed by an Indian blockade failed to exert enough pressure on the NC, UML and Maoists to rewrite the Constitution, Madhesi parties found common cause with Janajatis even though the two have mutually contradictory demands. The Madhesis want the eastern most Tarai districts of Morang, Sunsari and Jhapa in their province, while the Janajatis insist they belong to their hill province.

Urmila Devi Sah, an MP from Dhanusa, says the Federal Alliance was forged only after Janajati parties agreed to the Madhesi demand for two provinces in the plains that included the disputed districts. But Lila Nath Angdembe of the Federal Limbuwan State Council says: “Without the three eastern plains districts, our province will be much poorer.”

The protests may not be powerful enough to force a rewrite of the Constitution, but it could destabilise the UML-Maoist coalition. Prime Minister K P Oli sweet talked the Maoists into giving up their bid to topple the government earlier this month, but if he does not step down after the budget, the Maoists could side with the NC and use the Madhes crisis to try to unseat him again.