The Kiwi way to reconstruction 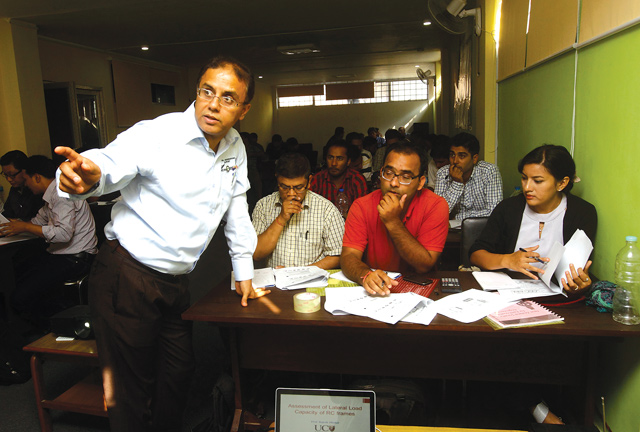 Aside from the fact that New Zealand and Nepal sit next to each other alphabetically at international conferences, the two countries couldn’t be more different. But they have one thing in common: both sit on active seismic faults and are prone to earthquakes.

On 4 September 2010, five years prior to the earthquake in Nepal, New Zealand had its biggest earthquake in 70 years. The M7.1 earthquake was epicentred near Christchurch, but it didn’t kill anyone. However, six months later a weaker M6.3 quake struck again and caused structures weakened by the previous earthquake to collapse. Some 185 people were killed.

In both Nepal and New Zealand, earthquakes are not predictable but are expected. A major earthquake strikes Nepal every 80 years or so. The 7.8 M earthquake that rattled Nepal on 25 April left 8,856 people dead and 22,309 injured and destroyed 602,257 private homes. But it wasn’t a surprise.

Although the peak ground acceleration of the earthquake in Christchurch was 2-3 times more than that in Kathmandu (the exact number for Nepal cannot be determined because the measuring station was too far from the epicentre) the damage although considerable doesn’t compare to the widespread destruction in Nepal.

The reason is simple: New Zealand has stringent building codes and actually enforces them. The original building codes go back to 1935 and although the earthquake design really only started around 1960s, the codes have been strengthened time and again and the builders have to undergo 3-4 years of apprenticeship.

““From what I have personally observed, the best way to move forward for Nepal is to continue to increase compliance with the building codes,” said Steven Knowles, leader of a team of seismic structural engineers from New Zealand who are working with Department of Urban Development and Building Construction (DUDBC), Nepal Engineers’ Association, Institute of Engineering to train Nepali structural and civil engineers. 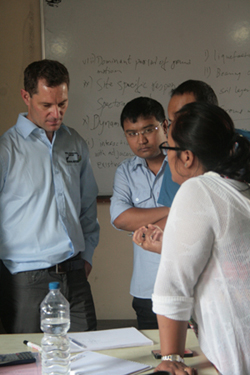 Jitendra Bothara, co-team leader and a seismic engineer based in New Zealand agrees: “Both urban and rural buildings are covered in building codes, only the implementation part is lacking.” Bothara, who was also involved in preparing the building codes for Nepal in 1992-94, says it is a good thing the government is revising the codes. He says that while modern buildings have come a long way since the building codes were first introduced, they are not up to the mark. “It is a continuum. We need to revise and implement as we move forward,” he says.

The team is training 150 structural and 70 civil engineers on how to assess, retrofit and strengthen the existing buildings in a bid to build back better. A single batch of engineers receives trainings for eight days on masonry and reinforced concrete buildings.

“Building back better is not enough because you can only build back what has come down,” said Rajesh Dhakal, a professor at the University of Canterbury in New Zealand. “We have to strengthen the existing buildings as well. In Nepal, retrofitting and strengthening are reactive after the damage has occurred whereas these are actually means of better preparedness.”

Apart from the loss of life and property, the other consequence of the earthquake  was that the ground over a large part of the country has moved by several metres. Kathmandu Valley itself moved 1.8m southeast and rose 1.15m in elevation, disturbing the existing geodetic network. This means the coordinates in geodetic databases and GIS network are now way off their actual locations.

This can pose a serious problem in disaster recovery efforts because coordinates determined before the earthquakes will not match the real location on the ground.

Professor Christopher Pearson, a geodetic expert from New Zealand is working with Survey Department to help develop a deformation model as well as revise national datum for Nepal.

“Working with Chris we realised that we needed to find out how much change has occurred to the previous coordinates,” said Niraj Manandhar, a geodetic scientist at Department of Survey, Nepal.

The geodetic control points used for different types of mapping are not only the bases for the design of most infrastructures but also serve to measure the movement of the earth during earthquakes. Hence, having a modern geodetic data is crucial for disaster recovery process.

Dynamic geodetic datum can be achieved by establishing networks of Continuosly Operating Reference Stations (CORS) or active control points. A study conducted by Geodetic Survey Branch suggests a distributed network of 147 CORS at a 30km inter-station distance to achieve real time geodetic network. Says Manandhar: “If active control points are installed, it is going to be a major leap since the existing datum is collected by passive control points.”

"It will be a huge calamity"

No hydro, no power

Getting rid of the brokers

Giving up on grannies

Artist weaves designer carpets in Nepal and sells them in Australia to create jobs and fund education in Nepal
JUANITA MALAGON
Wow! It namely likewise fine treatise about JavaScript, babyliss pro curler I dissimilar Your post doesn't acquaint any sense. ray ban outlet uk if information are defined surrounded sketches one can effortlessly be versed with these. hollister sale I think a visualized exhibit can be better subsequently simply a effortless text, chanel espadrilles for sale that why it gives you improved quality. getnjloan.com Can you amuse forward me the code for this script alternatively interest distinguish me surrounded detail among relation apt this script? Vivienne Westwood online get a babyliss perfect curl Very soon this network sheet longing be outstanding among all blog viewers, isabel marant sneakers saleI too prefer Flash,